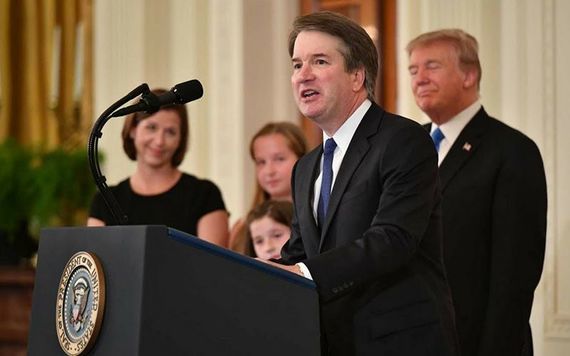 Can we start with this? Can we start by saying, from MSNBC to Fox News, some of us have got to step up and accept that something – anything – is NOT of existential, end-times importance?

Whatever your values or beliefs, there is a human limit to believing civilization is ever on the brink.

And make no mistake about it, far too many people these days believe civilization is about to burst into flames.

The first thing all of those people should do is look at the folks they believe to be their enemy. And realize they actually agree on one thing.

They believe the world is about to end.

But they agree!  Baby steps, you know?

I guess it’s also a bad time to throw around phrases like “life and death,” right?

What can I say?  I have two daughters and a wife.  I’m pro-choice, for these reasons and many others.

I get there is anger in the land.

And so, here come the activists called Ruth Sent Us saying, "Recognize that six extremist Catholics set out to overturn Roe. Stand at or in a local Catholic Church."

While you’re at it, why not go after those Jews who run Hollywood?

The point, of course, is not that Catholics are beyond criticism.  The point is that in a day and age – and among an activist set – that is always howling about dignity, they would decide the best way to argue their point is to cite another person’s religion.

Someone should send the message to Ruth that, like it or not, today’s Supreme Court is actually what happens when immigrants and their children (yes, even women) are empowered.

Just a few decades back, Catholics would never have gotten more than one seat on the high court. They were too close to immigrant poverty.

But Justice Samuel Alito’s father was an immigrant. And Clarence Thomas was educated and inspired by an Irish immigrant nun. And Amy Coney Barrett was educated by Dominican nuns in high school, as well as at a certain university in South Bend.

Progressives claim they want immigrants and their offspring to have power.  Guess what?  This is what a version of that looks like.

Go crazy, if you want, shifting the discussion to “white supremacy,” but afterward, please read Sunday’s excellent dispatch from Laredo, Texas, in The New York Times, which included this nugget: “Even among Democrats, support for abortion rights may not uniformly motivate voters, particularly working-class Latinos, a demographic that has shown signs of drifting away from the party.”

“Northern Ireland is on the cusp of having a nationalist leader for the first time in its history after Sinn Féin, once considered the political wing of the IRA, emerged as the largest party in regional elections,” CNN reported.

“Sinn Féin is now the largest party in the Assembly and can nominate a first minister for the first time. The party is opposed to Northern Ireland being part of the United Kingdom and is in favor of a united Ireland.”

Now here is some progress we can get behind, right?

Hundreds of years of marginalization, in Ireland north and south.  And for a century now, nationalists and republicans have been fighting to protect vulnerable citizens under the banner of Sinn Féin.

And here they are, shifting from an armed struggle to a political one, from the margins to the mainstream. All the while with women holding the positions of both president and vice president.

Why, it seems like Irish American Republicans could learn a thing or two from Ireland’s Sinn Féin republicans.

And that must also include abortion.  Right?