The immigrants have been coming to America since it was founded. It's time to stop this archaic rhetoric. 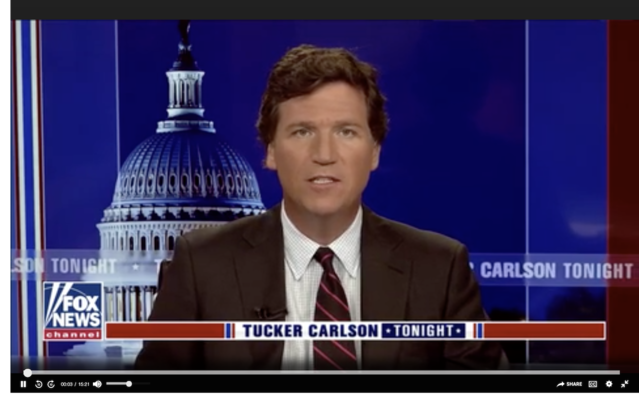 Fox News, Tucker Carlson channeled his inner Coolidge by peddling what some on the QAnon fringes have referred to as “white replacement theory.” Fox News / YouTube

You hear a lot these days about angry weirdos who have all these outlets for posting their kooky ideas, so that other weirdo kooks can spread the word. “Whose country is this?” one such angry fella asked not long ago.

“Our country must cease to be regarded as a dumping ground,” sneered Vice President Calvin Coolidge, exactly 100 years ago.

The future president unfurled his rage in the pages of -- yes -- Good Housekeeping magazine. He believed that Ellis Island immigrants were ruining America.

“It would not be unjust to ask of every alien, What will you contribute to the common good, once you are admitted through the gates of liberty?…Of late, the answers have not been so readily or so eloquently given.”

Coolidge reminded his readers that past immigrants were made of better stuff.

“Sixteen years after they landed at Plymouth, (the Pilgrims) founded Harvard College.  That was their offering for the common good.”

Because if anything screams "common," it is Harvard.

Ah, but by the time Coolidge was writing, something had gone wrong. The worst kinds of immigrants were coming.

“There are racial considerations too grave to be brushed aside for any sentimental reasons. Biological laws tell us that certain divergent people will not mix or blend. The Nordics propagate themselves successfully. With other races, the outcome shows deterioration on both sides,” he said.

Where have you gone, Miles Standish?

There were too few Nordic Pilgrims in 1921, and so many Celts and Slavs. “Divergent people.” From Ireland and Poland and Russia.  And Italy and Greece.

It was almost as if the noble Harvardians were being...replaced.

This week, over at Fox News, Tucker Carlson channeled his inner Coolidge by peddling what some on the QAnon fringes have referred to as “white replacement theory.”

Carlson said, "I know that the left and all the little gatekeepers on Twitter become literally hysterical if you use the term 'replacement,' if you suggest that the Democratic Party is trying to replace the current electorate -- the voters now casting ballots -- with new people, more obedient voters from the Third World.

"Let's just say it. That's true…Every time they import a new voter, I become disenfranchised as a current voter.  This is a voting rights question. I have less political power because they're importing a brand new electorate."

Sounds like someone just switched from anti-abortion to pro-choice!  Because, why should babies be born?  When we can’t be sure how they’re going to vote!

And, by the way, half of the Fox News universe is populated by the grandchildren of the “divergent” replacement immigrants Coolidge hated.

So take it easy, Tuck. This may all work out for you in the long run.

Nearly as bad as Carlson’s predictable paranoia has been the predictable reaction of his enemies who don't see just another desperate right-winger trying to rally pitchfork conservatives in the post-Trump era.

Nope, they see unprecedented hatred.  Never before has such a thing ever been said. At least by someone named Tucker Carlson. This week.

The fact is, whatever version of “replacement theory” you want to peddle, the U.S. has been through it many times -- a dominant group afraid and appalled by newcomers who were seen as inferior and unworthy of the vote.

The Irish, in particular, were faulted for ruining American democracy. It’s why Thomas Nast always drew his ape-like Irishmen with a voting ticket in their hats.

It’s why The New York Times complained over and over that the Irish were “ignorant and the vicious," only voting with "support gained by political hints dropped in front of Roman Catholic altars."

But, Tucker, if you really want to suppress votes, let’s start with the sizable Fox News Irish Catholic vote, and see how that goes.