Ruby Maher, from Newbridge in County Kildare, responded to the President's call for young people around the world to get involved in this year's Earth Day. 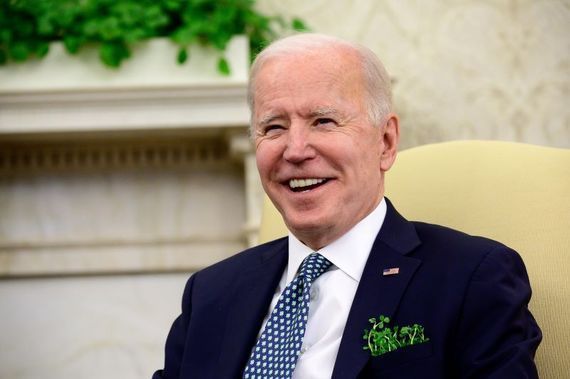 President Joe Biden is calling on young people around the world to play a part in Earth Day on April 22. Getty

A 12-year-old girl from Kildare has written a letter to US President Joe Biden ahead of global Earth Day on April 22.

Ruby Maher, from Newbridge in County Kildare, responded to the President's call for young people around the world to get involved in this year's Earth Day.

The young singer recently recorded the popular song "Lullaby for the World" with her family and she included a copy of her song in her personal letter to Biden.

"I just thought I’d write the letter to try and get the world to listen," she told the Irish Times. "I’m only a little girl and president Biden is the most powerful man in the world, but I feel that he will read my letter as his family is from Mayo and he’s always talking about how he loves Ireland."

The 12-year-old singer told Biden that she "recorded a present" for him with the Mahers' new song.

"We heard that you want young people to help on Earth Day, so this is our gift from the children of Ireland," Maher wrote in the letter to Biden.

Maher said that she hoped that the President liked her family's attempt to "help the planet" through song and said that she was excited by the possibility that Biden will like the song.

"It’s really exciting as I believe we have a real chance of him loving our song. I really believe Lullaby for the World is going to awaken people to the need to protect our Earth."

Maher believes that everyone can play their part on Earth Day later this month and said that she asked her principal at the Holy Family school in Newbridge to organize a clean-up day at the school.

"I’d just love if all Irish schools did the same," she said.

She called on all Irish children to get involved in Earth Day and encouraged people to spend even five minutes picking up trash in their local area.

"Just think of what we could do if we all got behind this initiative. We could do it every year, it would be brilliant. It’s something all us kids can do in a safe and socially distanced way and it means we’re taking action."

Her father Dave Maher believes that Ruby's letter to Biden could be a "lightning rod" and said that "Lullaby for the World" belonged to everyone.

"My girls and myself see Lullaby for the World as a song that is global and one which belongs to all of us. We feel honored to be the ones who have the good fortune to record it.

"We’re so excited about this song. The reaction from the people of Ireland has been wonderful."

The song's lyrics were written by famous Irish songwriter Brendan Graham, who wrote the famous song "You Raise Me Up".

Graham is a native of County Mayo and Ruby Maher hopes that Biden will be inspired by the connection to his ancestral home when he reads the letter.