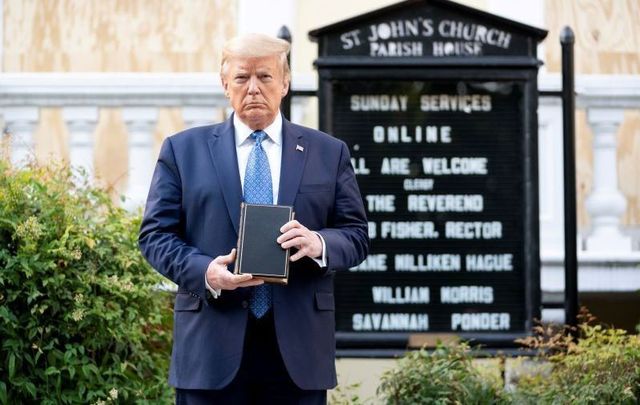 The theme of President Trump’s inaugural address in 2017 was American carnage, a warning that poverty, drugs, crime, and a lack of education were issues that must be addressed, or America faced perdition.

Once in power, Trump adopted a very different agenda, but his American carnage speech has now come back to haunt him.

The disaster he envisaged when he took over has now materialized on his watch to the point where America is facing full-blown economic, public health, and race relations crises.

Under his leadership, a pandemic has ripped through the country killing over 100,000. Trump's hesitant and ultimately hopeless response added greatly to the number of casualties.

In what could have been his finest hour, Trump instead politicized the pandemic and tried to turn it to his advantage. Even as a political tactic it was brainless, resulting in an immediate drop in approval ratings.

Trump showed quickly that the pandemic would be all about him, and not suffering Americans. Remember all those White House briefings where everyone from Mr. MyPillow was invited up on stage to take a bow, and praise Trump effusively?

No first responders or victims’ families were ever included. The lack of empathy and outreach was stunning, as was the president’s refusal to take responsibility.

Now come the riots, and Trump, once again reaching back to his slim playbook, is trying to politicize the aftermath of the horrible murder of George Floyd.

The president threatened to have looters shot, dared marchers to attack the White House, and promised immediate violence if they did so. He urged cops to get tough on protestors and blamed Democratic governors for being too slow to react to trouble.

At a time when a nation needed a conciliator, a father figure to appeal to our better angels as Lincoln did at Gettysburg, a cheerleader for peaceful protest, and a promise to tackle the blatant issue of bias and racism, what we’ve got is a Twitter wielding buffoon.

....These THUGS are dishonoring the memory of George Floyd, and I won’t let that happen. Just spoke to Governor Tim Walz and told him that the Military is with him all the way. Any difficulty and we will assume control but, when the looting starts, the shooting starts. Thank you!

Parts of America now fit the description of American carnage, and Trump’s urging to crack down on demonstrators will only fan the flames.

The American people finally seem to be tiring of the circus. A new ABC/Washington Post poll shows Democratic challenger Joe Biden 10 points ahead with only five months to go until Election Day on November 3.

The need for a conciliatory figure has never been greater than now. We should never forget that James Buchanan, America’s worst president until Trump, was followed by the greatest one, Abraham Lincoln.

Biden is no Abe Lincoln, but he is a conciliator, a man who recognizes the horrific damage to race relations that is now occurring and a leader who will choose to work with all sides. He will also leave the pandemic policy to the professionals where it belonged from the beginning.

Trump will use the looters and the dregs of humanity who caused much of the violence at the marches in a play for the law and order vote as Richard Nixon did in 1968. The election will be fought against the backdrop of the worst pandemic in 100 years and race relations at their lowest ebb since the 1960s.

It will be no less than a battle for the soul of America, between a vision that is outward-looking, inclusive, and empathetic, and one that is about exploiting American carnage to stay in power.

It is imperative that Joe Biden wins and ends this Trump nightmare.

Read More: Why some of my anti-Hillary friends are leaning towards Biden 2020