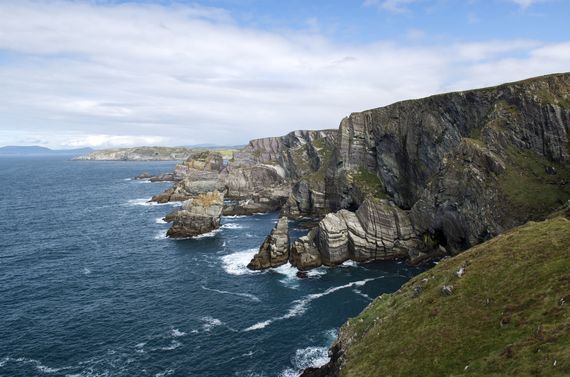 In summer in West Cork, it can be hard to remember heartache exists.

The world is a children’s book, everything round-faced and friendly, painted in primary colors. The fields are full of baby animals and there are crowds of happy families on the beaches and harbourfronts, swimming, sailing, sunning, drinking pints, and eating ice cream.

Winter is a different story. The holidaymakers vanish and half the houses stand shuttered. Winds scream off the north Atlantic and waves claw up the Mizen cliffs. In the lower valleys, mists haunt the lakes. It can feel bone lonely. Not urban loneliness – the loneliness of standing on a dark wet pavement peering through a window into a warm peopled room. A different kind of loneliness made of vast ancient indifferent stone battered by monstrous waves of the deadly white sea – and you beside them, windswept, awestruck, alone.

December and January surprised us this year: the sun shone, birds sang, and a few butterflies even tried their wings. "We've been very lucky”, everyone said.

February arrived, and with it came Imbolc and tiny lambs and the fields greening up. “We’ll pay for this”, the farmers warned. And sure enough, around the middle of February, the weather changed, and a trio of storms blew in hard from the southwest: Dudley, Eunice, and Franklin. These three storms pulled down trees, sheared off roofs, and left West Cork without power – in some places for many days.

Then the storms went away, but high winds trailed in their wake and for weeks the seas remained wild, roaring and smashing against the shoreline. In the more protected coves, 'selchies', seals, bobbed about. The mouths of these coves swirled in terrifying whirlpools, waves crashing into each other from every direction. The water looked impassible. It made sense that the seals would choose to wait out the worst of the winter weather in these sheltered places.

On the beaches, seal pups appeared. Every winter, when the seas get bad, seal mothers drop their pups on the sand to rest while mom goes off to hunt. So, on Sunday, I wasn’t surprised to find a seal pup on my local strand, turning his/her grey whiskery face to look up at me with a mild, genial, sealish welcome. The pup’s expression was uncannily human as if he was trying to place where we’d met before. I was reminded of the Irish legends of the Seal-Folk.

The English writer David Thomson’s first book was a collection of these legends. Thomson lived in Ireland for much of his youth, and in middle age, he traveled the west coast collecting folk tales about seals, with whom he felt a special kinship. According to these old stories, there was supposed to be a creature in the water for every sort on land - cows and sheep and every sort of animal – but the seals were the people of the sea. So close were they to humans, that in the stories, mother seals would steal away fishermen’s babies to raise them as their own, while male seals had been known to come ashore to marry some fair-faced farmer’s daughter and live with her for many days and nights until the seal was called away again by the sea.

Anyone who’s spent any time on or near the water in West Cork knows where those stories come from. The Grey Atlantic seals who live here are curious and clever; their eyes follow you, and they often pop up beside your boat as if about to ask a question. As Thomson wrote, “climb onto the seals’ rocks with the knowledge that the sea before you stretches unbroken to America and know that for thousands of years people believed what you now feel – that you are at the uttermost edge of the earth – and when all is quiet except for waves and sea birds, you hear an old man gasp. You turn toward the sound. It's a seal that's broken the surface of the water to take a breath and, very often, seeing you it will raise its whole torso and stare back at you.”

The storms have been bad for us on land, but worse for the people of the sea. There was only the one seal pup on Sunday; I’ve seen as many as three in other years. The old stories Thomson recorded say that long ago there were sometimes as many as a hundred seals at the mouths of caves, where now “one or two is the most you will see for there is nothing now the way it was in the old times. The land hasn’t the people working on it, nor the hill the sheep, nor the cattle it had; nor the sea hasn’t the strong shoals of herring in it, nor the mackeral, nor none of the creatures that were.” Maybe that’s why winter feels so lonely. Maybe long ago, when the land and sea were peopled with many creatures, it felt different.

My local strand is vast and flat when the tide is out. On Sunday, there were only a few other creatures sharing it with the little seal pup and me: a sandy dog, a pair of brave hooded people walking arm-in-arm. “Now we’re getting winter!”, one of them remarked, shouting into the wind as he passed. Sand pelted my face. I squinted my eyes. There was the seal pup and a ribby seal carcass at the far end of the beach and not much else to see, not even kelp. It was beautiful, cold, empty. The seal pup and I looked at each other. For no reason I could think of, my heart ached.