The Shelbourne Hotel in Dublin, Ireland issued a further statement on July 27 saying it has removed the statues from its premises. 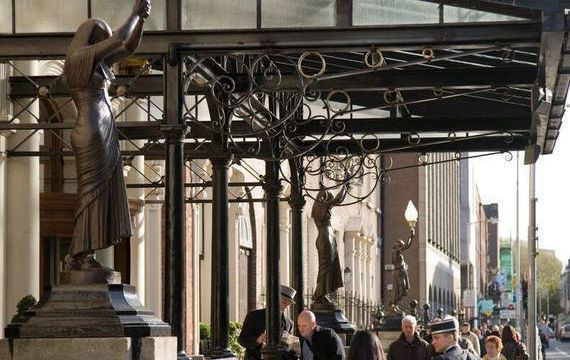 The Shelbourne Hotel in Dublin issued a statement on July 27.

Update 1:55 pm EST: A spokesperson confirmed with IrishCentral that the statues have been removed from The Shelbourne Hotel in Dublin.

Update 11:30 am EST: The Shelbourne Hotel has announced that it will be removing the statues of chained girls from its premises.

In a statement issued to IrishCentral, the hotel said: "In light of recent world events, The Shelbourne Hotel in Dublin has taken the decision to remove two statues at the front of the hotel.

The following was published earlier in the day on Monday, July 27:

Four statues of manacled slave girls outside the five-star Shelbourne Hotel in Dublin should come down argues Irish American, as images circulate among the community.

A Wiki Commons image of one of the four statues outside the Shelbourne Hotel in Dublin depicting manacled slave girls serving Nubian princesses has been circulating here in Irish American circles and causing significant anger in this era of Black Lives Matter.

This, after all, is the hotel where the Irish Constitution was drafted, in 1922.

The image, found on Wikipedia, is described as follows: 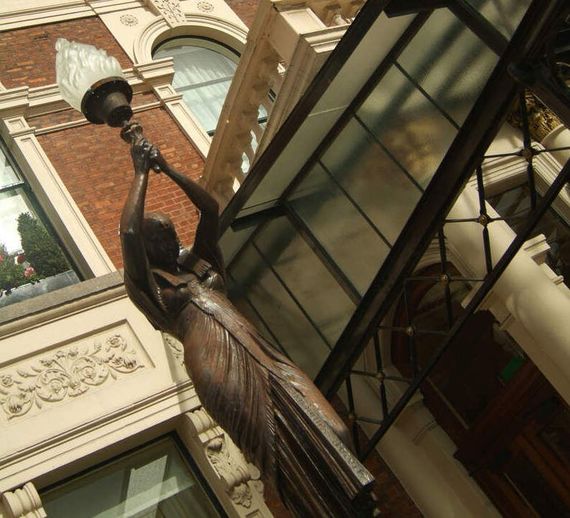 A statue of a manacled slave girl serving Nubian princesses, outside Shelbourne Hotel, in Dublin.

There are actually four statues, two at either side of the entrance to the hotel, depicting the Nubian queens and their manacled slave girls.

Obviously, at a time like this, they should be removed at once. Ireland has made much of their connection to the great anti-slavery crusader Frederick Douglass yet on one of their most traveled thoroughfares, outside one of their most prestigious hotels, opposite one of the most beloved parks in Europe, Saint Stephen’s Green, are four statues depicting slavery of young women in a positive light.

The Shelbourne and St. Stephen’s Green was also the location of some of the fiercest fighting in the fight for Irish freedom in 1916. To have a favorable representation of slavery where Irish freedom was fought for is cretinous. 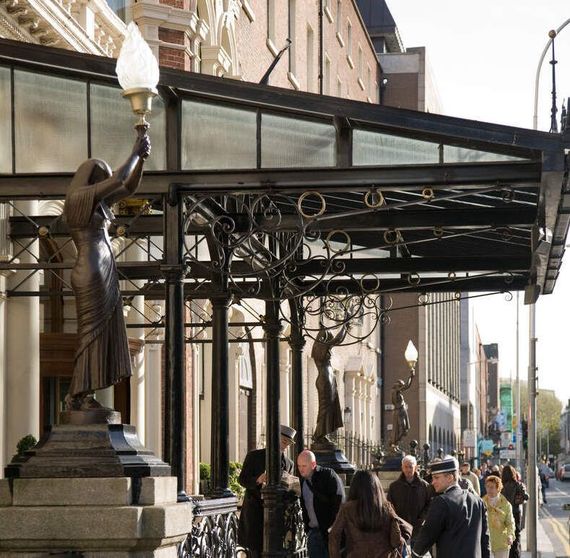 A statue of a manacled slave girl serving Nubian princesses, outside Shelbourne Hotel, in Dublin.

In 1922 after the War of Independence the committee appointed to draft a new Irish Constitution (Bunreacht na hÉireann) met in a sitting-room in number 122 of Shelbourne hotel. The room, now known as Constitution Suite, overlooks St Stephen’s Green and is the hotel’s most famous banqueting room. Hereunder the chairmanship of Michael Collins, the Irish Constitution was drafted.

The wiki common caption states “Statue of slave girl outside the Shelbourne Hotel in Dublin. There are four external statues at the entrance to the hotel on St Stephen's green - two Nubian princesses and their slave girls, in shackles.”

For shame. They must be replaced with true Irish anti-slave heroines.