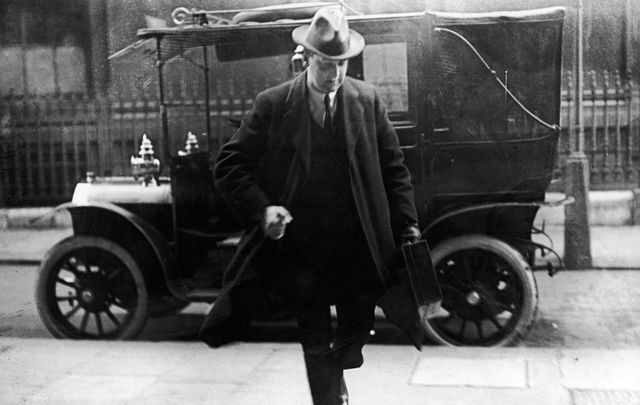 During the War of Independence, Michael Collins was forced to hide his gun from the Black and Tans while riding the trams but which unusual place acted as his hiding place.

I was sitting in the Oval Bar on Middle Abbey Street a few years ago with my cousin Brendan Bartley and his wife Geraldine when a Luas tram went by outside with its bell ringing. I said to them, “Boy, this could be 1920s Dublin.”

Since then, the Luas system in Dublin has been expanded dramatically into the northside of the city, using abandoned railroad lines and it has become a weapon to combat global warming, reducing Ireland’s carbon imprint from fossil fuels.

The new tram system brought back memories of the Dublin of yore when trams heading for Nelson’s Pillar crisscrossed the Fair City. Trams even played an important role in the War of Independence as they were one of the main modes of transportation to get around the city, the bicycle being the other.

One of the most spectacular shootings by Michael Collins’ Squad, AKA the Twelve Apostles, was on a tram in Ballsbridge. British magistrate Alan Bell, a man who had been playing with Fenians since the time of the Land League, was sent to Dublin in 1920 to unearth funds from Collins’ National Loan.

Some of Michael Collins' Squad.

When £18,000 was confiscated from a Dublin bank, Collins decided it was time for Bell to cease breathing.

He was pulled off a tram on his way to work at Dublin Castle and shot dead in April 1920. Thereafter the British had trouble getting bank examiners to come to Dublin to look at the books.

London was alarmed and the Secretary of State for War, one Winston Churchill, signed off and soon the Auxiliaries and the Black and Tans would hit Irish soil. Churchill also put a £5,000 (sometimes embellished to £10,000) bounty on the head of the man responsible for the death of Bell and another spy named Jameson—that man, of course, being Michael Collins.

Read more: Did a search for buried gold lead Michael Collins to his death?

Where did Collins hide his gun?

Trams were often stopped by British patrols and each man and woman searched. In the event that a tram was stopped by a Black and Tan patrol, where could a rebel ditch his weapon? There’s a wonderful book about the history of the Dublin tram system by Michael Corcoran called “Through Streets Broad & Narrow: A History of Dublin Trams” where that secret is revealed.

“The late [conductor] Joe Greally,” wrote Corcoran in his history, “recalled that he was collecting fares on the top deck of a crowded tram in South Great George’s Street on a summer day in 1920 when they were stopped by a patrol. Making his way towards the stairs to get to the platform as quickly as possible, he was horrified to see a pistol suddenly land in his cash bag. Thinking fast, he managed to hide it in the destination box as he started down the stairs. Trying to appear normal, he was petrified while he accompanied the raiders through the tram. After getting the Black and Tans off the car without further incident, Joe returned to the destination box, intending to retrieve the pistol and address some strong words to the inconsiderate coward who had put him in such danger. As he opened the box two pistols fell out. The passengers stared at him impassively so he turned both weapons in as lost property and heard no more about them. Subsequently, he learned that the gun in the destination box trick was a specialty of Michael Collins, who often travelled on the Dalkey line. On these occasions, Collins usually rode on the front balcony, thus having a good view of the road ahead and close to the destination box in the event of a raid.”

If you’d like to see a circa-1920 Dublin tram you can visit the National Transport Museum of Ireland, which is within walking distance of the Howth stop on the DART.

The Museum not only has trams but many of the double-decker buses that replaced the trams.

The thing you’ll notice about the trams is how small they are. On the open-decked ones, you’ll be shocked at how narrow the stairs are. Irishmen and women of the early 20th century were obviously much smaller than their 21st-century counterparts.

So if you visit the Museum, just seek out that destination box to see if, maybe, General Collins left one of his Colt revolvers there!

Dermot McEvoy is the author of “The 13th Apostle: A Novel of Michael Collins and the Irish Uprising” and “Our Lady of Greenwich Village,” both now available in paperback, Kindle and Audio from Skyhorse Publishing. He may be reached at dermotmcevoy50@gmail.com. Follow him at www.dermotmcevoy.com. Follow The 13th Apostle on Facebook.