If you enjoyed 'The Many Saints of Newark,' you might want to check out the Italian Mass at St. Lucy's in Newark - said by Fr Paul Donohue. 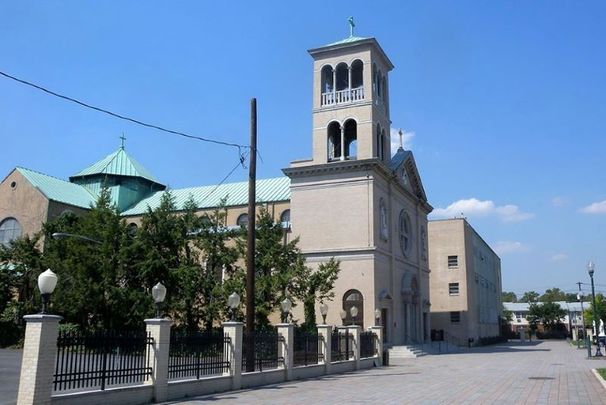 The long-awaited Sopranos movie The Many Saints of Newark was finally released last week, giving fans of that beloved show a brief but glorious trip back in time, back to Satriale’s pork store, and Holsten’s diner and ice cream shop, where the onion rings are amazing, as long as you don’t spend too much time parallel parking outside.

Anyhow, if Many Saints really put you in a nostalgic mood, you may want to visit St. Lucy’s parish in Newark from October 15-17, for its annual festival in celebration of St. Gerard.

The festival, now in its 122nd year, inspired the season six Sopranos episode “The Ride,” equal parts hilarious and horrifying, mainly because Tony Sirico’s Paulie Walnuts is at the center of the story.

For decades, St. Lucy’s was the hub of Italian immigrant life in Newark. Even now, every Sunday at 8 a.m., a Mass in Italian is celebrated -- by Irish American pastor Father Paul Donohue.

Like many priests in the U.S., Father Paul’s roots may be in Ireland but he spent lots of time in Rome, and elsewhere in Italy.

“The Donohue brothers were the ones that came over,” Donohue says, referring to his grandfather, known as Flory. “He was the older one. He came over with his brother Timothy.”

The Donohues came to the states from Tralee, Co. Kerry and worked as carpenters, mainly on the railroads.

“They worked for what became the Penn Central. Because (train) cars were made of wood, and you needed carpenters,” Donohue says.

Donohue’s mother’s family came from Ireland around 1901, first to Boston before settling around New England.

Donohue recalls his mother’s stories about neighbors falling ill from the deadly disease which, of course, has taken on a new relevance in the last 18 months.

Donohue and St. Lucy’s have faced numerous unique struggles because of Covid.

Last year’s feast of St. Gerard was basically cancelled. Not only did this disappoint thousands of current and past parishioners, it also cut deeply into parish fundraising efforts.

Then, of course, there was the challenge of trying to celebrate Mass every week while also keeping attendees safe. As if that were not enough, a fire damaged St. Lucy’s rectory about five months ago.

All of this adversity should make this year’s St. Gerard fest all the more special. Which brings us back to Father Paul’s 8 a.m. Mass in Italian.

What about those who worry an Irishman can’t actually preside over such a Mass?

“I got that down,” says Donohue with confidence.

He studied and worked in Italy for a total of seven years, and attributes his appreciation for the deep history at St. Lucy’s to the years he spent in Italy, often serving as a bilingual tour guide of sorts for visitors.

A native of Larain, Ohio, west of Cleveland, Donohue also spent time in Ireland with the Comboni missionaries. He has been at St. Lucy’s in various capacities for over a decade and is the parish’s first non-Italian pastor.

The original St. Lucy’s church was built in 1891, and for decades the streets were almost exclusively Italian. As Many Saints indicates, that began to change in the 1960s when police brutality led to racial unrest and the notorious 1967 riots.

These days, with the St. Gerard feast back, and Many Saints just out, Father Paul and the parish are ready for a close-up.

Many Saints star Alesandro Nivola recently paid a visit, along with The New Yorker magazine.

“To prepare for (his) role...a mafioso whose charisma conceals a jumble of violent and tender urges, Nivola…immersed himself in the culture, reading books about Newark and exploring local landmarks. Now he wanted to revisit one, the Museum of the Old First Ward, a modest space housed on the grounds of St. Lucy’s Church,” the magazine noted.

Once this year’s feast is over, and the rectory repaired, Father Paul and the rest of St. Lucy’s parishioners will try to get some kind of normalcy back. That includes an Irishman’s weekly Masses in Italian.