IrishCentral Contributor Katherine Simmons reminiscences about waitressing as a teen at Irish bar and restaurant Rosie O'Grady's in NYC in the 80s. 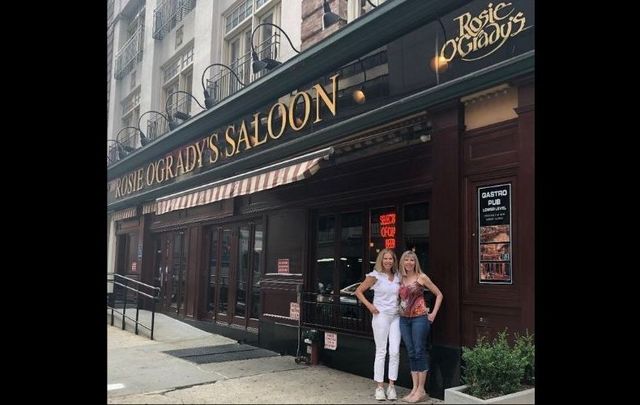 In the summer of 1982, my sister Sheila and I worked as waitresses at Rosie O’Grady’s in midtown Manhattan. Rosie’s was a haven for all those Irish and all those who wished to be.

Co-owners Mike Carty and Austin Delaney, both Irish-born, could always be counted on to find work for a new arrival, fresh off the plane from their homeland sometimes holding nothing more than a few dollars in their pocket and hope in their heart. Everyone sooner or later found their way to Rosie’s. It was that sort of place. 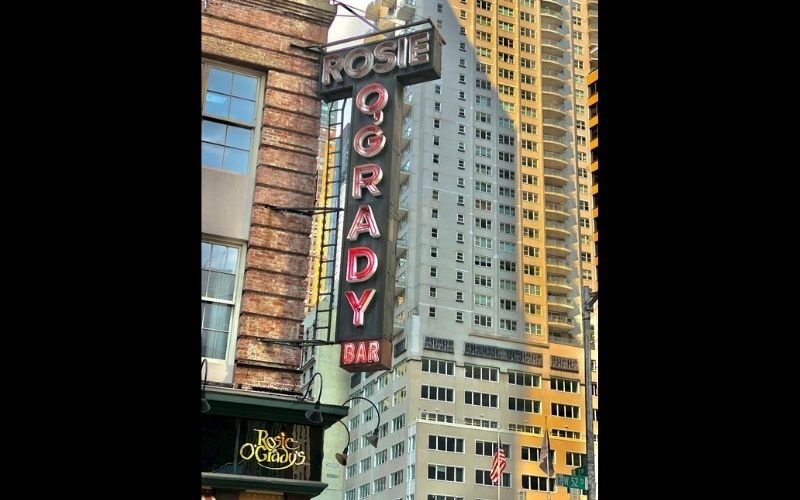 My father Bill Dickinson was General Manager and suggested that a stint learning the restaurant business would be a summer well spent for my sister and me. So on a hot afternoon, clad in white blouse, black skirt, and comfortable shoes, we left our Long Island home headed to W 52nd Street, NYC.

That summer almost forty years ago, remains one of my fondest and most cherished. I remember those days. When the lights of Broadway still shone brightly and the theme of each and every night at Rosie’s was laughter and merriment. And the band played on…

Glancing at the clock above the waitress station whose hands that night seemed to be moving counter clock-wise, I pondered which song the band would play to wrap up the evening. It was without fail one of two ballads - “Good Night Irene” or “Show Me the Way to Go Home.” I made a silent bet with myself on the latter and smiled as the bandleader struck up the tune to prove me right.

“Show me the way to go home. I’m tired and I want to go to bed. I had a little drink about an hour ago and it’s gone right to my head…”

I knew every word by heart to those Irish songs and on certain days, when life seems to be going at a speed I cannot control, return to sweet Rosie O’Grady’s and a time where my father is alive once again. Young and handsome, he stands tall at the front door welcoming patrons. We can’t go back again, but we can remember.

Dabbing my finger to my lips to reapply my gloss, I tapped my foot merrily to one of my favorite tunes, “Lovey Leitrim,” the county of my mother’s birth and a song especially dear to my heart. Smoothing my apron as I hummed along, I glanced at the kitchen door which at that very moment swung open with a bang. I spotted my sister Sheila with whom I partnered as a waitress. As her eyes met mine I could have sworn for a moment they narrowed. It had always been a source of friction between us, our roles in the waitress hierarchy. Waiters and waitresses were comprised of a team of two -one working outside on the floor and the other inside the kitchen.

Sheila felt her job, (the inside) which consisted of standing in the kitchen under the hot lamps of the steam table and then bringing the food to the awaiting customer was the more laborious and unglamorous. I, (the outside partner,) took cocktail and dinner orders. How these roles were initially decided upon remains a mystery though I believe it was reasoned that she was the more physically stronger and better suited to toting the often back-breaking trays.

I watched her approach a corner table as she balanced two plates of prime rib like a seasoned juggler, a glint of perspiration on her brow. Maneuvering the steaming platters her arm shaking under the weight, she appeared to lose her grip allowing a stream of gravy to spill evenly onto the stunned diner’s lap. Casting the unpleasant scene from my mind, I made my way to the bar. I would no doubt hear all about it on our car ride back to LI that night. After all, she had the harder job.

It was the people I met while working at Rosie’s who remain with me. The charming, charismatic bartender John Carroll whose twinkling blue eyes could transfer a teetotaler into a seasoned drinker and whose life ended in a tragic auto accident far too soon.

In contrast was his fellow bartender Miles, who had a smile and wink for every customer but with his quick wit and razor tongue an insult for the rest of us, all in good fun but scathing nonetheless.

There was Mary “O,” the vivacious, carefree, fun-loving blonde waitress who was rumored to later become an NYC sergeant and her dark-haired and sweet smiling Irish partner Kathleen.

Who could forget the middle-aged team of Anne and Paula who bickered constantly yet worked together like a finely oiled machine and on more than one occasion held their own during late nights at the Blarney Stone, throwing back shots with the younger crew no worse for the wear the next morning.

I remember the beautiful, ethereal Laura who waited tables to earn money for acting school like so many other young dreamers and the gregarious and big-hearted chef Mohammad whose brilliant smile radiated over the heat of the steam table and whose quick temper terrified those who had not yet discovered his kindly nature.

I recall the retired detective Brendan who, as host during the day, charmed the ladies with his lilting Irish brogue, and at dusk, magically transformed into intimidating bouncer ready to escort the occasional unruly patron to the door.

The night would officially end around 2 am. With tables cleared and tips counted, we headed to our home away from home, the Blarney Stone, for an after-work drink or two. And in those late-night hours, we spoke of life and the occasional difficult customer while Bob Seeger sang soulfully on the jukebox.

But summer days are short. In what seemed the blink of an eye, we bid farewell to Rosie’s, retired our aprons, and headed back to Long Island to return to school. With us we took fistfuls of cash, a new trade learned, friends we vowed to meet again, and memories to last a lifetime.

I am older now with a family of my own. My parents have dearly departed. Sheila and I remain as close as ever. Each Christmas we gather at her house in gratitude.

During our last celebration, while sipping a glass of wine in her family room, I glanced into the kitchen. Sheila, clad in a tidy white apron, was removing with some difficulty the steaming turkey from the oven. Her arm was shaking under the weight of the tray as she balanced the bird. Looking up suddenly as if sensing my stare, her eyes met mine and in that moment, I could have sworn, narrowed.

The history they say, has a way of repeating itself. I promised myself I would clear the table for her that very night as both a penance and memento to our days at Rosie O’ Grady’s.