Mick the Miller: The most successful greyhound of all time

Born the runt of the pack in Co Offaly, the Irish greyhound Mick the Miller went on to become a star. 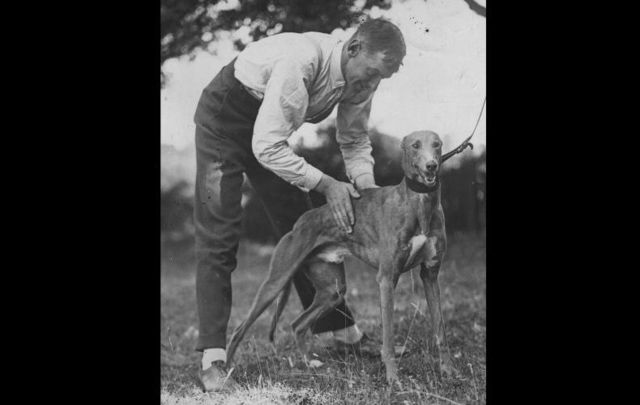 Circa 1930: Greyhound 'Mick The Miller ' receiving a massage at kennels at Walton on Thames. Getty Images

In most towns and villages across Ireland stands monuments or statues to local heroes from the past.

In Straide and Foxford stands Michael Davitt and Admiral Brown. In Ballyheigue and Cahirsiveen stands Sir Roger Casement and the Liberator Daniel O'Connell. In Mullingar stands Joe Dolan, and in Killeigh, Co. Offaly proudly stands Mick the Miller, the greyhound who became a movie star.

Mick was a direct descendant of "Master McGrath" (1866-1873), a famous Irish greyhound that won the Waterloo Cup three times in 1868, 1869, and 1871, and the first greyhound to do so. Master McGrath was such a celebrity that his owner was asked to take him to be seen by queen victoria & the royal family. A bronze statue of Master McGrath stands in Lurgan in Armagh today.

Mick was bred by local Killeigh priest Fr Martin Brophy, originally expected to be used for hare coursing until a man from St. Louis, Missouri named Moses Rebenschied came looking to bring him back to St. Louis to compete in the greyhound circuit.

Before the deal was complete, a tornado hit St. Louis, killing 27 of Moses greyhounds after the roof came off the kennel. A further four greyhounds were killed in a van driven by his son when it overturned due to the storm. Rebenschied took it as a warning from god to stay away from greyhounds and called off the deal for Mick the Miller.

In April 1928, he made his debut at Shelbourne Park winning the Punchestown stakes. He raced a further five times in 1928 winning four times and equaled the 500m world record.

Mick was diagnosed with distemper (a highly contagious viral disease) the day after competing in the Abercorn Cup final and nearly died. Fr Brophy, who had reared Mick through thick and thin, refused to accept defeat and brought him to veterinary surgeon Arthur 'doc' Callanan who slowly managed to nurse Mick back to full health against all odds.

On advice from leading greyhound trainer (Mick Horan), Fr Brophy decided to enter Mick into the English Derby. Before his trial, Mick was a 25-1 no-hoper. After he broke the stadium record, he thundered into 4-7 odds on favourite for the English Derby. After the trial, Fr Brophy was overwhelmed with offers and sold Mick to Albert Williams for £800. A fortune in 1929!

Mick went on to win the 1929 English Derby by eight lengths setting a new world record for 525 yards. Over the course of his English career, he won 36 of his 48 races including the Derby twice, the St Leger, the Cesarewitch, and the Welsh Derby. He set six world records and two track records and the first greyhound to win 19 races in a row.

The first superstar of greyhound racing, Mick the miller was guaranteed to fill stadiums such was his celebrity. In 1934, after two years of stud, Mick starred in his own movie called 'Wildboy' alongside 'Flanagan & Allen.'

Mick the Miller died on May 6, 1939, having amassed £20,000 in stud fees, prize money, and his appearances in movies. In 2007, a list of top 100 sportsmen was completed by journalist Jon Henderson; Mick the Miller and famous racehorse Red Rum were the only two animals named.

Mick the Miller was named after Mick the miller, who was an odd job man at the vicarage where the greyhound was born and raised, part of his duties was looking after the greyhounds as pubs. Little did he realise he was in the midst of a future sporting and movie superstar that would have a statue in the middle of the parish that was opened by a Taoiseach nearly 80 years after his death. It's a dog's life!