President of Ireland Michael D. Higgins' pups Bród and Misneach were on hand for an interview on Sunday. 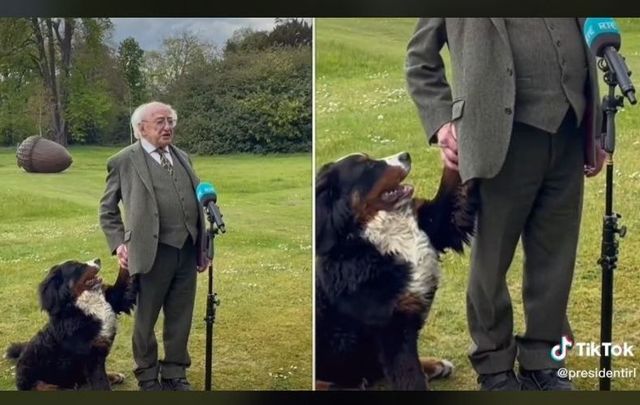 President Higgins had a special visitor during an RTÉ interview on Sunday. @presidentirl, TikTok

President of Ireland Michael D. Higgins' beloved Bernese Mountain Dogs Bród and Misneach were at his side as he delivered an interview for RTÉ on Sunday.

While President Higgins paid tribute to Irish actor Tom Hickey upon his passing, it was a clip of Higgins and his pup that has gone viral thanks to a "behind the scenes" tweet from Sinéad Crowley, an arts and media correspondent with RTÉ News.

The heartwarming video that shows President Higgins unbothered by his playful pup was also shared on the President of Ireland's official TikTok page, gaining more than 31k likes since it was first posted.

More than 400 comments poured in on the TikTok video, some of which said:

“Ladies and gentlemen, our president. I love living in Ireland.”

“So cute and a great character.”

“An absolute gentleman. Watch him with the dog’s paw - he kept holding it never once pushed him away. A true dog lover and great president”

“Those that show love to their animals have all of my respect. Obviously, there is a lot of love between these two.”

The beloved Bernese Mountain Dog stayed by his trusty owner’s side as the President offered remarks on the passing of Irish actor Tom Hickey on Sunday:

President Higgins and his wife Sabina are frequently spotted in Phoenix Park, where the Irish Presidential residence is located, with their two Bernese Mountain Dogs at their side, Bród (meaning pride) and Misneach (meaning courage).

Following the passing of Síoda last year, Misneach was warmly welcomed into the crew in March.