Bród and Síoda have achieved celebrity status in Ireland due to their endearing behavior during state visits. 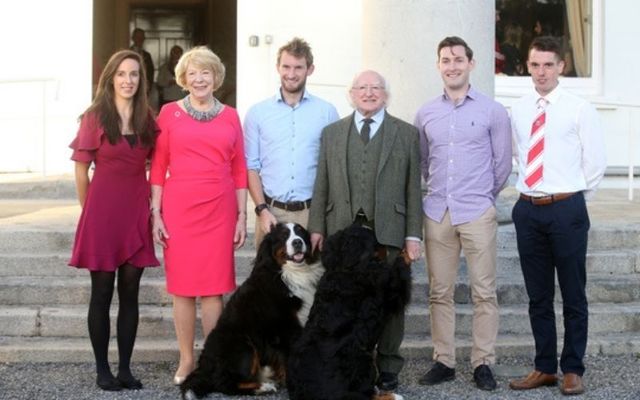 A spokesperson confirmed on Saturday that Síoda, one of Higgins's two well-known and well-loved dogs, had "passed away after a short illness."

Síoda and her companion Bród had been a popular double-act welcoming visiting foreign dignitaries and members of the public to Áras an Uactharáin.

The news was confirmed in Áras an Uactharáin's newsletter on Saturday.

"Sadly we must report that Síoda has passed away after a short illness," the notice said, appearing alongside an image of Higgins and Síoda.

Síoda and Bród achieved celebrity status in Ireland during Higgins's presidency and have been a regular fixture at official state visits and garden parties.

The dogs were pictured alongside Prince Harry and Meghan Markle during their royal visit in 2018 and have often stolen the limelight at presidential functions.

Both dogs would often stroll up to President Higgins while he entertained important foreign dignitaries in a desperate bid for belly rubs or scratches behind the ears.

Higgins once said that his dogs were not just ice-breakers during important visits, but sources of wisdom and knowledge as well.

The dogs gained a cult following among Irish people and there is even an unofficial Twitter account established in their name.

The account, named Bród and Síoda, has attracted more than 18,000 followers since it was established in October 2018.

The news of Síoda's passing was met with widespread dismay.

"Ah Richard could you not have told us he went to a farm down the country, cant deal with this right now," a Twitter user said in response to a reporter breaking the news.

"Sometimes I wish you were a less trustworthy journalist so I could cod myself into thinking you lying," another said in response to Richard Chambers.