Ireland should not welcome Trump, over 70% of readers vote against President’s visit

In a poll of IrishCentral readers asking “Should Ireland welcome President Trump on his first official visit?” 71% responded, “No, he shouldn’t visit.” 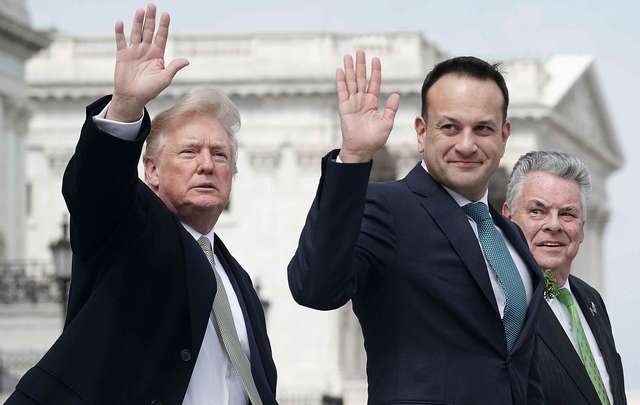 With protests already in the planning stages for President Trump’s November trip, IrishCentral readers believe that 45 should not visit the Emerald Isle.

By an almost 3 to 1 majority, IrishCentral readers stated that President Donald Trump should not visit Ireland this coming November. It was confirmed last weekend that the 45th US President is to spend several days in the Emerald Isle after participating in the armistice commemorations in Paris on November 11.

A statement from the White House confirmed last Friday that the visit to Ireland is to "renew the deep and historic ties between our two nations."

This will be Trump's first visit to Ireland since becoming President. He last visited in 2014 when he called at his golf course in Doonbeg, Co Clare.

In a poll taken of IrishCentral readers between Sunday, September 2, and Tuesday, September 4, however, almost three-quarters of those who responded believed that Donald Trump should not visit.

At the time of writing, 2,512 people had answered the question “Should Ireland welcome President Trump on his first official visit?”

Read more: Trump visit has Irish all charged up, some welcome, others despise him

“Of course Ireland should welcome President Trump as would the US welcome the Taoiseach,” one voter stated.

“The Donald is the head of State of one of the most important countries in the World. It will not matter one jot to him if a small country like Ireland snub him. It will, however, matter if the US snubs Ireland,” added another.

“Ireland has always been welcoming and open to everyone who wants to visit, even when they disagree with his or her politics or opinions. Why change that now?” said a third of welcoming Trump.

“The Irish should welcome Don the Con the same way they would welcome Cromwell on a visit to Ireland,” another voter argued in reply.

“Points for creativity and leaving some kind of mark. He should leave Ireland determined never to return under any circumstances. It should be humorous and clever.”

President Trump will visit Ireland in November. The US President is always welcome in Ireland. Our two countries have such strong historic, economic, cultural and family ties. Maintaining those connections is always a top priority 🇺🇸🇮🇪🇪🇺

The news of Donald Trump’s trip to Ireland announced by the White House for mid-November has been greeted with anger by opposition groups but warmly welcomed around the area in Clare where his Doonbeg golf resort and the hotel gives massive local employment.

Plans for protests are already underway, with the Trump blimp baby from the London visit even expected to make an appearance.

“These policies do not reflect the Irish people’s values - we need to show him and the world that this is not normal.”

We could hold a candle light protest on the evening of Donald Trump's visit to Ireland. I told @NPR earlier today why we are protesting and about the Irish tradition of large peaceful public rallies. You can listen here https://t.co/tXTVFaaFjS #TrumpInIreland #StandUp4HumanRights pic.twitter.com/eXWl4dAhnX

Clare Co Councillor Bill Chambers, however, has said it would be “a great boost for the West of Ireland” if the US President came to visit.

“They’d be mad about him coming there. There was up to 300 people working there over the summer and it is a great boost for the people of Doonbeg. If he comes to Ireland I’d say he’ll come to Doonbeg as well, but of course, we don’t know anything about his arrangements yet.”

“A great boost for the West of Ireland,” says Clare county councillor who represents area where Trump’s golf resort is located, if US president’s visit includes stop at Doonbeg #TrumpIrishVisit - @IrishTimes https://t.co/qu499pzkbU