Trump visit has Irish all charged up, some welcome, others despise him

The announcement of Donald Trump’s November trip to Ireland has been greeted with anger by opposition groups; however, local politicians and public around Trump’s International hotel and golfing location had a very different view. 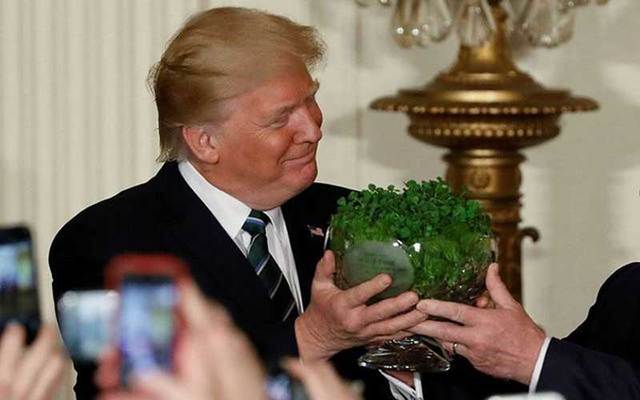 President Donald Trump being presented with a bowl of shamrocks on St. Patrick's Day. Rollingnews.ie

The news of Donald Trump’s trip to Ireland announced by the White House for mid-November has been greeted with anger by opposition groups but warmly welcomed around the area in Clare where his Doonbeg golf resort and hotel gives massive local employment.

Senator Aodhan O Riordan who has spearheaded opposition to Trump both in Ireland and the US where he had held an annual protest in New York every St.Patricks period, lashed out at the government for accepting Trump’s visit calling it “completely and utterly disappointing.”

Trump will be met by “huge protests,” he told The Irish Times. The Irish people he said wanted to send “a strong message to the Trump administration that we reject absolutely and entirely his kind of politics.”

He said they needed to reject what Trump has stood for, the rhetoric that he is propagating, the lies he is telling, the hate that he is trading and to stand for something a bit more decent and a bit more in keeping with the Irish experience,” M O Ríordáin said.

“If we are just going to go along and accept that this person will travel to Ireland then I think the Irish people will have something to say about that.”

Left-wing People Before Profit TD Richard Boyd Barrett said that it was “shameful that Leo Varadkar would welcome the odious Donald Trump into this country.”

“His poisonous, hate-filled and dangerous politics are not welcome in Ireland and I would urge everybody who opposes war and racism and who cares about equality and the planet to join the protests that we will certainly organize against Trump when he comes,” he said.

Green party leader Eamon Ryan said “Donald Trump’s administration champions policies that are destroying our planet, destabilizing international order, and reaching new political depths by appealing to racism, misogyny, xenophobia and hatred. These policies do not reflect the Irish people’s values - we need to show him and the world that this is not normal.

Fianna Fáil’s spokesman on foreign affairs Niall Collins said the visit was “an opportunity for the Government to state Ireland’s position that the need for decency, compassion, respect for international diplomacy and integrity has never been as important and as necessary as it is today.”

However local politicians and public around Trump’s International hotel and golfing location had a very different view.

Clare Co Councillor Bill Chambers, said it would be “a great boost for the West of Ireland” if the US President came to visit.

“They’d be mad about him coming there. There was up to 300 people working there over the summer and it is a great boost for the people of Doonbeg.”“If he comes to Ireland I’d say he’ll come to Doonbeg as well, but of course we don’t know anything about his arrangements yet.”

Read More: Despite Trump's best efforts John McCain will long be remembered as a hero

Michael Begley, the independent Mayor of Clare, said the staff in Doonbeg, who are “exceptionally well treated”, would love a visit from President Trump.

Hugh McNally, a cousin of US vice president Mike Pence and owner of Morrissey’s pub in Doonbeg, said he and the customers were “all extremely excited” and “optimistic that the visit will be great for the area and put Doonbeg on the map,” he said.

“He will be welcomed back to this area with open arms. He has been great for the village,” said Mr McNally.

“He promised two things back in 2014 when he bought Doonbeg: he would invest in the property and sustain the employment. He has done both of those things. He is very much in favour in the Doonbeg area.”