"Trump and his allies proudly passed a new health care bill which is blatantly un-Christian." 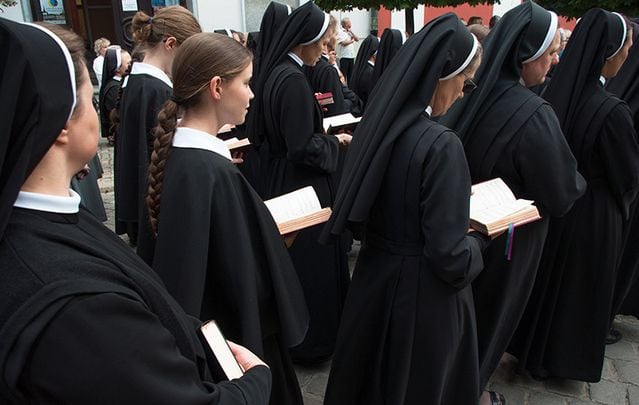 It so happens that on the same week our president was standing at a lectern surrounded by priests and nuns, I was finishing up J. Courtney Sullivan’s excellent new novel Saints for All Occasions.  The book chronicles a sprawling Boston Irish clan and spans the decades, from the immigrant journey two young sisters take from Ireland right up to the 2000s, when tragedy strikes.

One key character in the story becomes a nun, joining an order dedicated to a life of solitude and easing the suffering of others.  One nun even employs an ancient Japanese healing method known as Reiki.

“She performs this therapy on the homeless.  On women who are going through chemo and poor people from the community,” a fellow nun notes.

One day, however, the nuns find out “the bishops had issued a statement saying that Reiki was incompatible with the church’s teachings.”

Now, I get that authors have to contrive things from time to time to make certain characters sympathetic or unsympathetic.  But of all the ways Sullivan could have made the bishops look like bumbling bureaucrats this seemed a tad far-fetched, even for fiction.

But, lo and behold, this was actually a thing!  In the past, nuns and others have been warned to cease and desist with any healing therapies that don’t involve stepping into a dark box, whispering and being made to feel massive guilt.

Back in 2010, a correspondent on the PBS show Religion & Ethics Newsweekly noted that “the U.S. Catholic bishops say Reiki is superstition, and they’ve urged Catholics not to provide or support it.”

Which is sort of funny given that some folks might call the central tenets of Catholicism -- water into wine, bread into flesh, the dead rising -- a little superstitious.

None of which changes the fact that the nuns in Sullivan’s book, like so many nuns in America and across the world, do amazing, anonymous work.  Which made it all the more sad to see the Little Sisters of the Poor joining other religious leaders in a Rose Garden signing ceremony last week.  President Trump signed an executive order which he touted as a beacon of religious liberty, which would stop the federal government from "bullying and even punishing Americans for following their religious beliefs."

Forget for a moment that a bunch of folks -- religious conservatives and secular liberals -- said that the executive order was essentially meaningless.  The American Civil Liberties Union, which never met a lawsuit it didn’t like, decided it was not even worth their while to sue.

Read more: 50 ways to lose your healthcare now thanks to Trump and the GOP

Still, it is true that the Little Sisters had a problem with Obamacare, arguing that it compelled them to provide contraception against their beliefs.  There were easy ways they could have navigated this, balancing their own beliefs with the rights and needs of their employees.

But it is fair to say that striking that balance is never going to be easy.  It is also fair to say that there is quite a bit of humor in the fact that some in the Republican Party are crying over religious liberty one minute, while screaming about creeping Sharia the next.

Anyhow, the really sad thing about the nuns, priests and other Christians who joined the president at the Rose Garden is that they did so the same week Trump and his allies proudly passed a new health care bill which is blatantly un-Christian.

The U.S. Conference of Catholic Bishops has already blasted Trumpcare while Pope Francis has said, “Health is not a consumer good but a universal right, so access to health care cannot be a privilege.”

Pope Francis siad “Health is not a consumer good."

Perhaps Trump can talk about this (rather than beautiful slices of chocolate cake) when he meets with Pope Francis later this year.

It’s sad the Little Sisters of the Poor were rolled out for a photo op with the president.  But at least we know they will get back to work alleviating suffering in the world.

Trump and his un-Christian minions -- including Irish Americans like Paul Ryan and Mike Pence -- may want to try and give that a try next time they blather on about “religious liberty.”

Read more: Anne Biggs was banished by Catholic Church to US at the age of four