Why now is not the time for an Irish Unity poll

"If they can't come together and produce a harmonious society in the North, how can anyone think they can make reunification work?" 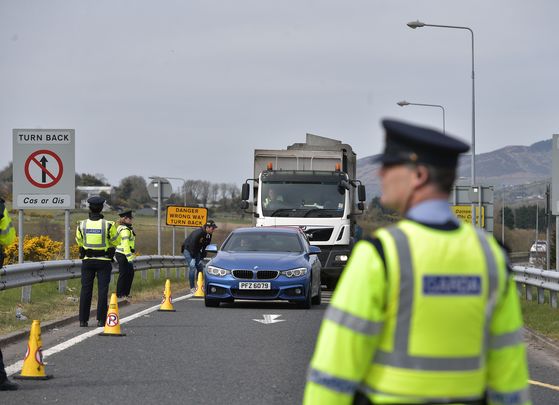 Calling for a border poll and suggesting that a united Ireland is now inevitable has become the thing to do recently among some people who should know better.  One expects it from Mary Lou McDonald and Sinn Fein since it's their policy.  But even some conservative grandees have been at it recently.

A few weeks ago it was George Osborne, the former chancellor of the U.K. Exchequer, who likes to see himself as a plain-speaking visionary as well as a financial whizz.  Last week it was Max Hastings, a former editor of The Daily Telegraph, the bible of the Tory Party, who regards himself as an expert on military history.  But such calls are clueless.

Osborne is now editor-in-chief of the London Evening Standard where he wrote a piece saying that Northern Ireland was “heading for the exit door.”  The Northern Ireland protocol, which keeps the North in the EU single market, means that it was now "slowly becoming part of a united Ireland.  Its prosperity now depends on its relationship with Dublin and Brussels, not London. The politics will follow,” Osborne wrote.

Hastings made similar remarks, writing for Bloomberg that "such an outcome would serve the best interests of Irish people, save a rump of alienated Protestants, historically out of their time.”  He predicted that Irish unification will take place within a generation, “righting a historical wrong.”  He said most British people “did not care a fig" about Ireland, echoing Osborne's belief that “few people (in the U.K.) will care.”

They may well be right.  For several reasons -- economics and demographics being the primary two --the reunification of Ireland makes sense. Its time has come, it can be argued because Brexit has changed everything and the unity of the United Kingdom is under severe strain as a result.

But even if unity seems like the obvious solution, all that does nothing to solve the problem we have been left by history.

Hastings referred to this history in his piece.  He said the partition of Ireland in 1921 was a “monstrous injustice” which was done to satisfy the million Protestants in the North whose “forebears were planted in Ulster by Oliver Cromwell’s followers in the 17th century.”

In the decades following partition, the unionists wielded power in the North by discriminating against Catholics/nationalists.  He accused them of treating the Catholic minority “almost as harshly as U.S. white segregationists in the old South treated African Americans."

The sole rationale of the unionists, Hastings wrote, was "the negative one of staying out of the Irish Republic by remaining attached to Britain.”  All true, of course, but where does it leave us now?

Partition in 1921 was implemented to avoid a catastrophic conflict and bloodshed.  It was far from perfect, but what was the alternative?  History had left Ireland with a problem for which there was no easy solution, either then or now.

Hastings' reference to the Ulster plantations -- Protestants from Scotland and the north of England transplanted into Ulster -- that began in the early 1600s should ring bells with Americans. The pilgrims arrived in New England in 1620, around the same time.  Is anyone over there suggesting their descendants and all those who came after them are not American?

The fact is that the "Proddies" have been in Ulster that long, getting on for 400 years.  They are Irish, even if they also regard themselves as British.

Finding a way of accommodating them is the challenge, just as it has been since partition.  The time may be coming when a united Ireland makes sense, but it will only be possible if we can find a way to do that.

What we have learned over recent decades is that violence will never do it. You cannot bomb a million unionists into changing their minds and joining the Republic.

Coercion by continued calls for a border poll will not do it either.  Even if a poll in the next few years were to produce a slim majority in the North for reunification, we cannot then force a million unionists to accept a united Ireland.

The answer lies in persuasion.  What we have to do is persuade them the new Ireland would be a better option for them.  That means engaging with them.

It means exploring the things that make them so opposed to reunification.  And then making the changes here that would meet their concerns and convince them that their allegiances, traditions, and beliefs would have an equal status in a shared united Ireland.

We need to get to the stage where unionists actively want to join us.  Some of what might be involved in this could be very difficult for people here to swallow.

If we are to show respect for their allegiance to the crown, for example, should we rejoin the Commonwealth? Would we need a new national anthem? A new flag?  Should the Twelfth of July be a national holiday like St. Patrick's Day?  Gestures like these would be just the start of it.

Sinn Fein's call for a border poll as soon as possible has been criticized as premature and dangerous.  Instead of persuasion, it sounds like compulsion.

It's saying to unionists that we want to welcome you into a new Ireland...but you are going to have to accept it whether you like it or not, once the numbers stack up.

To be fair to Sinn Fein leader McDonald, she says that what she wants is for the Irish government to start preparing now for the unity she sees as inevitable.   She wants people in the south to start thinking seriously about it.  She wants the conversation with unionists to be ramped up over the coming few years.

But to unionist ears, the tone coming from Sinn Fein still has a compulsory edge to it.  That is where Taoiseach Micheal Martin differs from McDonald. He has said he will not support a border poll during the five-year term of this government because he thinks it would be premature and would do more harm than good.

But for him, it's about far more than that. It's about listening to the unionists, about accommodation and persuasion.

Like John Hume and Seamus Mallon, Martin believes it's about uniting people rather than the two pieces of land on the island.  He set this out recently in his shared island policy which is essential reading for anyone interested in our future.

He believes the element of compulsion implicit in calls for an early border poll must be taken out of the conversation.   There must not be a limited time frame. We are still a long way from when the conditions would be right to hold a border poll.

Before that can happen we must all know in detail what unity would mean, in terms of political structures, economic costs, the changes to our society, etc. And that will be just as important in the south as in the north.

Sinn Fein has produced a paper on the cost of unity which claims that the £10 billion annual subvention to the North from the British government is overstated.  It suggests that the real figure is about half that when the North's share of the cost of running the British state (British embassies around the world, the British Army, etc.) is removed.

But costs like this won't vanish after reunification -- instead, they will be related to the Irish state.

The general feeling is that even if there is considerable support for Irish unity internationally, any financial support would be partial and temporary.  That means taxpayers here will have to pick up much of the bill.

Before any border poll is held -- and it has to be held in the south as well as the North -- there will have to be clarity for voters here on what they will be taking on board.  Everyone is in favor of the idea of unity.  Paying for the reality is a different matter.

Sinn Fein claims there will be a substantial dividend from unification due to rationalization and other savings. They also believe the North's economy will be reinvigorated along the lines of the south.

Again, there is some skepticism here about this since the Northern economy and society have been so dependent on state supports and handouts for so long. It could take years to turn that around, just as it is taking in former East Germany.

Indeed the experience of reunification in Germany often held up as an example, is interesting.  It's now 30 years since it happened but the east is still lagging far behind.  And German taxpayers on middle and higher earnings are still paying an extra five percent solidarity tax on top of their income tax to try to level up the unified country.

The extent of the challenge in the North will not just be financial, of course.  The biggest challenge by far will be to achieve mutual respect and understanding between the two communities there.

We are still far from that.  Yet those who have failed to close the divide are the very ones now pushing for an early border poll.

From a southern perspective that prompts an obvious question.  If they can't come together and produce a harmonious society in the North, how can anyone think they can make reunification work?

Concerns in the south will not just be financial when a real debate gets going here in advance of a border poll.  If there is no sign of the two sides being able to live in harmony in the North, people here will be worried that unionists will not accept a united Ireland even if a border poll produces a slim majority up there for reunification.

The backlash from unionists could be considerable. We have seen in the last few weeks how loyalists have reacted to checks on goods from Britain coming into ports in the North under the Northern Ireland protocol.

If these heavies are forced into a United Ireland, violence could return.  And this time it might be centered on Dublin rather than Belfast.

For all these reasons, it is far from certain that a border poll would produce a majority for reunification in the south. Much will depend on the debate and on how convincing the arguments are.   Hard facts rather than romantic notions about reuniting the four green fields will be decisive in the end.