Paul Redmond and Clodagh Malone of the Coalition of Mother And Baby Home Survivors (CMABS) are calling for further action in the wake of the Final Report. 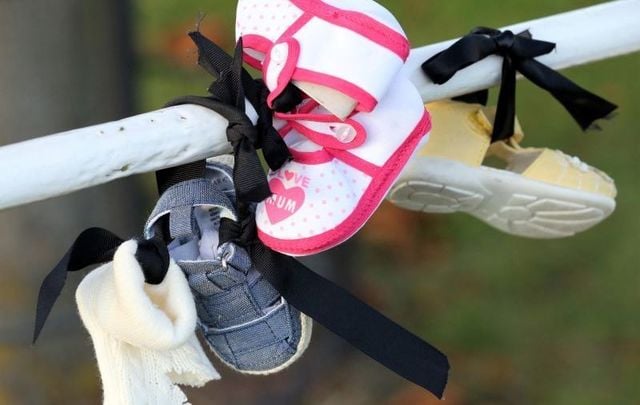 October 2020: Baby shoes hang from a railing at Aras an Uachtarain as part of a protest against calling on President Michael D.Higgins not to uphold the controversial Mother and Baby Homes legislation. RollingNews.ie

The Final Report of the Commission of Investigation into Mother and Baby Homes was published on January 12, nearly six years after the Commission was launched.

Editor's Note: Paul Redmond and Clodagh Malone submitted the following letter to IrishCentral in the wake of the publication of The Final Report of the Commission of Investigation into Mother and Baby Homes and the Taoiseach and Tanaiste's subsequent response in the Dail Eireann.

Now that the Commission of Inquiry has issued its long-overdue final report and the Taoiseach has formally apologised in the Dáil, it seems an opportune moment to draw a deep breath and step back and reflect on the wider issues surrounding these historic events.

The State are already trying to exclude as many survivors as possible from redress by arbitrarily setting a deadline of a "six-month" stay. The sad fact is that losing a baby to forced adoption is a traumatic event in a mother's life causing a form of post-traumatic stress disorder and it makes zero difference how soon after birth this trauma is inflicted. The horror remains, the depression, anxiety, nightmares, flashbacks, and secondary infertility, etc. etc.

Sadly, the Commission's Final Report is deeply flawed, although it could never have been any other way since its narrow terms of reference effectively excluded important sections of our wider community.

Up to 15,000 people in Ireland and abroad were illegally adopted during the timeframe under investigation and they were excluded from the Report despite the fact that our campaign for truth and justice emphasised that many of these people were unaware they were adopted and, consequently, they have spent their entire lives giving false, misleading, and potentially lethal family medical histories to doctors and hospital staff.

Equally, many of the religious run adoption agencies who were an integral part of the overall 'system' were known hotbeds of criminality and little more than baby traffickers.

Neither of these vital issues was addressed and are thus outstanding matters still to be dealt with.

Furthermore, the rest of the county homes were ignored by this Commission - more than two dozen escaped investigation. These institutions were simply the renamed Victorian workhouses that newly-independent Ireland inherited from our former colonial oppressors. During the early days of free Ireland, most of them had no electricity or basic sanitary facilities; babies died by the thousands in these hellholes directly as a result of the early state's policy of semi-official discrimination against single mothers and their babies.

Where is their truth and justice? It appears that despite our age, we will have to dust off our placards and Zimmer frames and head for the Dáil again.

We listened to both Taoiseach Martin and Tánaiste Varadkar apologise in the Dáil against a backdrop of empty seats. It seems the vast majority of our so-called public representatives didn't feel that it was worthy enough to attend the House.

I noted one thing in common with both their speeches. Neither mentioned their own political parties, nor their culpability in what is essentially Ireland's own little holocaust (9,000 babies dead and many thousands more deaths ignored) - insult headed upon injury and salt thrown in the wounds by the empty seats.

It appears both Taoiseach Martin and Tánaiste Varadkar have been reading the Catholic Church's bumper book of excuses as both tried desperately to deflect the blame from the state and their respective political parties.

The State making war on women and children was an all-party pursuit - but no! Apparently, it was "society's fault." As one TD noted, "when everyone is to blame, no one is to blame."

How convenient, but, then again, they are merely following the disingenuous lead of the Inquiry's report which laughingly says in the executive summary: "There is no evidence that women were forced to enter mother and baby homes by the church or state authorities," while the following sentence says, "Most women had no alternative"!

We, the taxpayers of Ireland, paid over 20 million euros for this contradictory mess?

Many of the statements in the Report mention certain issues but then claim they can neither be proved nor disproved. Is the Commission saying they don't accept the testimonies of the 500+ Survivors who testified to the Inquiry? It certainly looks like it. What was the point in our testifying if our word was to be doubted? Our testimonies ARE the proof.

Neither of those in this sickening double-act in the Dáil bothered to talk about real and immediate action for living survivors. My esteemed Protestant crib mate and seasoned campaigner Derek Leinster of the Bethany Home Group '98 has consistently maintained that the living survivor community must take priority over exhuming dead bodies or yet another talking shop.

This simple message has clearly escaped the double-act who, of course, did not commit to the second recommendation of the Inquiry that a referendum be held to overcome the complex legal quagmire that currently hampers all attempts to open the sealed adoption record so that aging mothers who lost their children to adoption, and adoptees, may finally reunite.

But not to worry, "it will be examined," they proclaim. Oh, joy, yet another faceless committee to deal with. Be still my beating heart...

Survivors have heard enough political waffle to last a lifetime, we need action while some of us are alive. Now, where's my Zimmer frame and bus pass?