The Irish government's response to the Final Report of the Commission of Investigation into Mother and Baby Homes is being criticized by survivors. 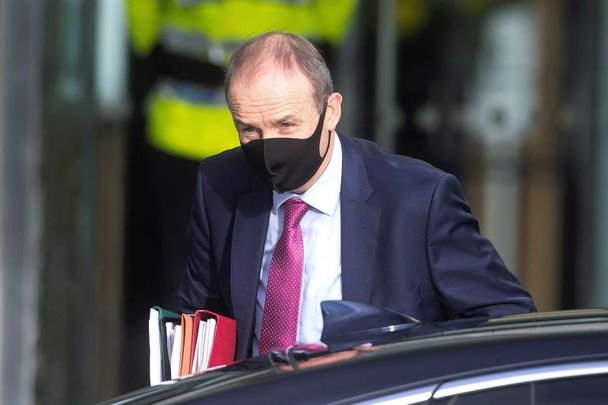 January 13, 2021: Taoiseach Micheal Martin arriving at the Convention Center in Dublin for the start of the Dail where he presented a state apology to the survivors of Ireland's Mother and Baby Homes. RollingNews.ie

Taoiseach Micheál Martin and Tanaiste Leo Varadkar responded today to yesterday's long-awaited publication of the Final Report of the Commission of Investigation into Mother and Baby Homes.

The final report was published on January 12, nearly six years after the Mother and Baby Homes Commission of Investigation was first launched.

The Coalition of Mother and Baby Home Survivors (CMABS) slammed the final report as "fundamentally incomplete."

On Wednesday, Taoiseach Micheál Martin, in a nearly-20 minute address during the Leaders’ Statements session in the Dáil Éireann, said in part: “On behalf of the Government, the State, and its citizens, I apologise for the profound generational wrong visited upon Irish mothers and their children who ended up in a Mother and Baby Home or a County Home.

“As the Commission says plainly - 'they should not have been there.'

“I apologise for the shame and stigma which they were subjected to and which, for some, remains a burden to this day.

“In apologising, I want to emphasise that each of you were in an institution because of the wrongs of others. Each of you is blameless, each of you did nothing wrong and has nothing to be ashamed of.

“Each of you deserved so much better.

“The lack of respect for your fundamental dignity and rights as mothers and children who spent time in these institutions is humbly acknowledged and deeply regretted.

“The Irish State, as the main funding authority for the majority of these institutions, had the ultimate ability to exert control over these institutions, in addition to its duty of care to protect citizens with a robust regulatory and inspection regime.

“This authority was not exerted and the State’s duty of care was not upheld.

“The State failed you, the mothers and children in these homes.”

He adds: “Overall, the Commission concludes that Ireland was a cold and harsh environment for the majority of its residents during the earlier half of the period under investigation.

It was especially cold and harsh for women. All women suffered serious discrimination. Women who gave birth outside marriage were subject to particularly harsh treatment.

Closing his address, the Taoiseach said: “Throughout this report, former residents talk of a feeling of shame for the situation they found themselves in.

“The shame was not theirs – it was ours.

“It was our shame that we did not show them the respect and compassion which we as a country owed them.

“It remains our shame.

“I want to reassure survivors, their families, and the country, that this Government is determined to act on all the recommendations of the Report and to deliver the legislative change necessary to at least start to heal the wounds that endure.”

You can watch the Taoiseach Micheál Martin's entire address here:

Speaking not long after the Taoiseach, Tanaiste Leo Varadkar said: “As Tanáiste, as a former Taoiseach, and as a member of the Government that established this Commission, I want to offer my own apology to the children who were hidden away, treated as a commodity, or as second-class citizens and to the mothers who for whom there was no other option but to give up their child.

“They may have consented but it was not free and informal consent in the way we understand that concept today.”

The Tanaiste does, however, go on to point out the “hopeful” nature of the Report and how it tells “a story of enormous change,” including sex education, legal adoption, legalised contraception, free secondary school education, among others.

“We should not be afraid or embarrassed to reflect on how much we have changed as a society, how far we have come. Doing so does not belittle in any way the maltreatment and experiences of women and children in the Mother and Baby institutions. Rather, it re-inforces them.

“The fact that today’s standards are better is not an excuse for the standards of the past nor should we think that our standards should not be raised further.”

Later, People Before Profit TD Richard Boyd Barrett, who was born in a mother and baby home and later adopted, slammed the report and the government's subsequent response.

Speaking in the Dáil after Martin's and Varadkar's addresses, TD Boyd Barrett said: "At this point, my feeling is that the Report and the official political commentary coming from government are being to look like a sham, an insult, and a whitewash of the gross crimes that were committed against thousands of women and infants.

"The Report and some of your comments yesterday seem to very consciously seek to diminish the culpability of the institutions of the Church and the State and disperse responsibility for the crimes that were committed onto society as a whole.

"Now, I think there should be apologies for that, immediately.

"I think some of the passages in this Report are offensive, quite honestly, in trying to shift the blame away from the institutions of the Church and State,  of trying to create a hierarchy of the severity of abuse between one institution and another.

"The constant refrain, which is offensive, of there being no evidence of abuse - is 9,000 children dying, in proportions way beyond the number of infants that were dying at that time in society as a whole, not in itself evidence of abuse?

"Was it not, in fact, an imprisonment sentence for every single woman who was forced to go in there? No evidence, as they say, of illegal adoptions, when in fact we have evidence?

"There seems to be a systematic attempt to not treat as evidence the testimonies of the actual survivors."

He added: "What is the apology for? Is it going to be a sincere apology and is it going to be an apology that actually results in actions that give justice and redress to the survivors of the mother and baby homes?"