The numbers of women and children incarcerated and mistreated in these institutions "probably the highest in the world.” 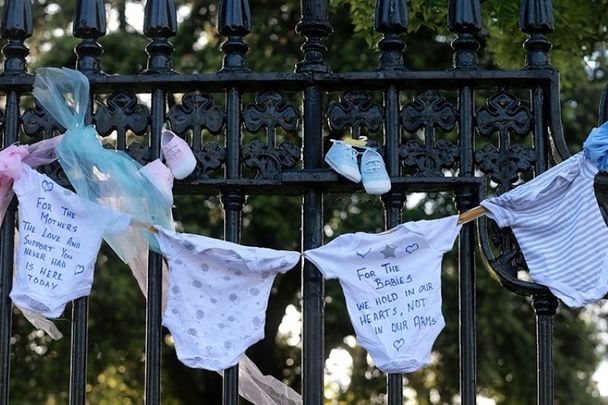 Mother and Baby Homes: A moving protest hung outside government buildings in 2014. RollingNews

Around 1,638 children, residents in Ireland's Mother and Baby Homes and County Homes were placed for foreign adoption, the report finds that the "vast majority" went to America.

A nearly 3,000-page report released by the Mother and Baby Homes Commission revealed that the "vast majority" of babies put up for illegal adoption from these religious institutions were sent to the United States. The report details the experiences of women and children who lived in 14 mother and baby homes and four county homes, just a sample of the existing homes, between 1922 and 1998.

The lengthy report, outlining the cruel treatment of unmarried women and their babies in Ireland found that 9,000 children died in these institutions, which is about 15% of all children recorded.

On Wednesday, Ireland's Taoiseach (Prime Minister) Michaél Martin made an apology to the survivors in the Dáil (Parliament). Other members of Cabinet also spoke including Ireland's Minister for Children, Roderic O'Gorman, who said "The events described in the Report took place over a wide span of time. Some occurred decades ago, others happened very much within living memory. Irrespective of when the events happened, the trauma that they caused, is very much alive. They form a scar for many of our citizens in Ireland today.

"Equally, the events form a scar for many who were sent abroad to be adopted, or who themselves fled our country, following the manner in which they had been treated. I know that this diaspora, abroad through no choice of their own, will be listening closely today."

The report states: “In the years before 1960 mother and baby homes did not save the lives of ‘illegitimate’ children; in fact, they appear to have significantly reduced their prospects of survival. The very high mortality rates were known to local and national authorities at the time and were recorded in official publications.”

The report shows that 56,000 unmarried mothers and about 57,000 children were residents in the homes investigated, with the greatest number of admissions was in the 1960s and early 1970s.

The Commission's report shows that between 1922 and 1998, 1,638 children were placed for foreign adoption. The vast majority, 1,427, were placed for adoption out to the United States.

While private adoptions were not illegal until the late 1990s these arrangements inside the homes "facilitated illegal registrations of birth”. Often in these cases, the adopted parents were listed on the baby's birth certificates as birth parents.

The new report stated that those adopted should have access to their birth certificates and associated birth information. It also adds that if needed, a referendum to change Ireland's constitution should take place.

“There should be such a right even though it is acutely conscious of the concerns expressed by some birth mothers about this," the report states.

“If, as seems likely, a referendum is required to allow for the necessary legislation, then one should be held.”

It continues “The Commission also considers that there should be a central repository of the records of institutions and adoption societies so that information can be obtained from one place.

“The Commission’s database of individuals compiled from the institutional records of the various institutions could be expanded by adding further records to it – see below for further recommendations on records.”

Following the release of the report, the Coalition of Mother And Baby home Survivors released a statement revealing they "have mixed feelings about the long-overdue final report,"

The umbrella group consisting of Adoption Rights Now, The Bethany Home Survivors, Beyond Adoption Ireland, Adopted Illegally Ireland, and The Castlepollard Mother & Baby home group said the report "ignores the larger issue of the forced separation of single mothers and their babies since the foundation of the state as a matter of official state policy.

While much of this policy was implemented in Mother and Baby homes, tens of thousands who were born outside the institutions investigated by this inquiry, have been excluded; particularly those who were illegally adopted. The numbers here are staggering as up to 15,000 people may have been illegally adopted by rogue adoption agencies who were allowed free reign back in the day and now have been given a free pass to escape their criminal behavior."

Paul Jude Redmond of the Catlepollard Mother and Baby home group said; "Illegally adopted people must have their basic human rights vindicated by the state immediately. They are entitled to the truth without further delay. The Coalition of Mother and Baby home Survivors (CMABS) will leave none of our adopted brothers and sisters behind and will continue to campaign until ALL survivors of forced adoption receive justice."

"All adoptions were forced"

Mari Steed was born at the Bessborough Mother and Baby Home, in 1960, she was adopted to parents in Philadelphia.

Steed spoke to Newstalk following the release of the report. Speaking about adoptions from these homes she said "All adoptions were forced, let's be honest, none of these women, none of our mothers had any kinds of supports... to raise a child on their own.

"That doesn't mean that they didn't want to.

"To say that you can't prove that they weren't forced [adoptions] - if you don't have any other options, what else do you call that?

"You're forced into a decision, and that's not even a decision, this is just what you have to do".

Steed went on to comment on how a lot of her life in the United States mirrored that of her mother's life in Ireland.

She said "I am a natural mother myself; I was forced by my adoptive mother to give up a daughter at 17 through adoption in Philadelphia.

"I did reunite with her, as well as with my mother, later in 2002 - so I'm very fortunate with regard to both scenarios that we've been able to reconnect and tie those threads back together.

"So there was that aspect of it: repeating history and that same shame and stigma, albeit in 1978 you would have thought in the United States, but not if you lived in a Catholic community in the Philadelphia area".

"My adopted mother was first-generation Irish, so I think she carried a lot of that".

During the months again the Irish Government has said it "will give very careful and detailed consideration to the report”. It will do so with a view to developing a comprehensive Government Action Plan spanning eight themes, including a survivor-centered approach, apology, access to personal Information, archiving and databases, education, and research, memorialization, restorative recognition, and dignified burial. Counseling supports have also been put in place for survivors.