Childhood memories of Twelfth of July in Belfast

Whether you march in the parades or not "Northern Ireland is unique and special. We need to embrace it". 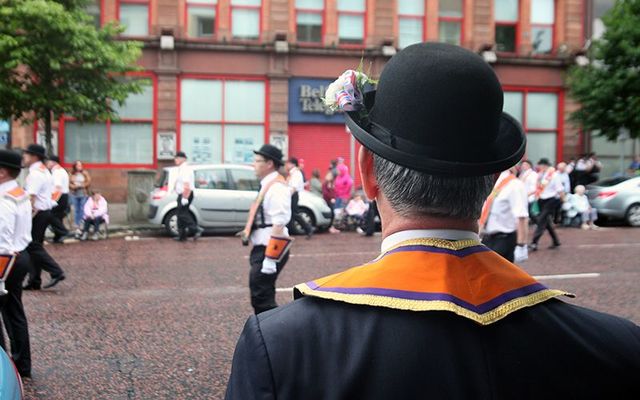 An Orange Order parade, around the Twelfth of July, in Northern Ireland. RollingNews

In the past 60 years, Northern Ireland and its people have been on a long journey, one which now, hopefully, is on its way to one of peace and harmony. A road to a unified community, which our writer remembers well and cherishes.

I spent my childhood in one of the more deprived districts of inner-city Belfast, where most of the neighbors were Catholic, until, by some miracle, Mum and Dad secured a mortgage on a newly built semi-detached house in a quiet suburb.  Suddenly I was surrounded by trees, fields, hedges, and Protestant neighbors who couldn’t have been nicer to us.

On our first July 12,  Dad walked us to the Antrim Road to see the Orange Order parade with its colorful banners and the sounds of drums, bagpipes, and flutes.  Mum didn’t come with us. She didn’t like Dad taking us to see the parade that, she thought, we’d be better off without.   If Mum was a hawk, Dad was a dove, a man of tolerance -  taking us to see the 12th of July parade was his way of saying that if we knew each other better we'd get along better.

We'd only been in our new house for five years when the butcher’s shop where Dad had worked all his life was expropriated and bulldozed and with seven kids to clothe and feed, a mortgage, and many other bills to pay, Dad was bulldozed too.  He slipped into a depression that anti-depressants and electroshock couldn’t cure.

Soon after Dad came home from the hospital, a neighbor that we hardly knew knocked at our front door. Mum let him in and made tea while the neighbor sat with Dad at the kitchen table and helped him fill in an application for a job at the newly opened factory, where he was a foreman.

A week later dad started a job that, without this neighbor's help, he'd never have found at 50 years of age. Our Good Samaritan neighbor, whose name was Tommy, was a Protestant and he saved our family from potential disaster. I've never forgotten his kindness. I never will.

Thanks to Tommy we were able to stay in the house in the suburbs which meant that most of my early teen friends were Protestant, my first mid-teen crushes were with Protestant girls and in my early 20s the young females who edged me towards the facts of life were Protestant and if weren’t for the violence, chances are I'd have settled down with one of them.

However, what happened, happened, and the mixing of the communities that was well underway in the 60s came to a crashing halt. Now though, half a century later, although Northern Ireland, especially in the low-income enclaves in Belfast is deeply divided, there are signs that people are coming together once more.

Some protestant citizens are studying Irish, which they see as part of a Celtic rainbow (nice image, that) of Scottish Gaelic, and Welsh all woven into the notion of Britishness. Many have applied for and obtained an Irish passport, ostensibly to maintain a link with the EU, following Brexit.

East Belfast, which is a Loyalist-Protestant-Unionist stronghold is playing host to an Irish language pre-school, Naíscoil na Seolta,  located in a purpose-built mobile classroom on the grounds of Braniel Primary School.

Then there is, amazingly, the East Belfast GAA (Gaelic Athletic Association) club founded by friends Dave McGreevy and Richard Maguire, apparently to break their COVID-19 lockdown boredom. Today the club has more than 1,000 members who come from a mix of backgrounds and identities; many have never played Gaelic football before.

Actor Jimmy Nesbitt who holds both British and Irish passports self-identifies in this way: “I would describe myself as an Irishman, from the north of Ireland, who in no way refutes nor shies away from my Protestant culture."

At an event in the New Gate Fringe Festival, held in the largely unionist Waterside district of Derry, Northern Irelands second and majority Catholic city, Georgina Campbell, Highland dancer said this: “My three best friends are nationalist girls who are self-employed artists. Highland dancers and Irish dancers work together on a regular basis...”

Then she added, ”Northern Ireland is unique and special. We need to embrace it and we need to market it. It is just this big mad eclectic place. I love it so much – I’ll never move away.”

Georgina's words, I think, express how many Northern Ireland people feel about their native place, their wee country - whether they are marching in a 12th July, parade, or not.