From Lord of the Rings to Churchill: Leo Varadkar's most noteworthy speech references

From Irish poets to Hollywood blockbusters, Leo Varadkar's speeches have them all. 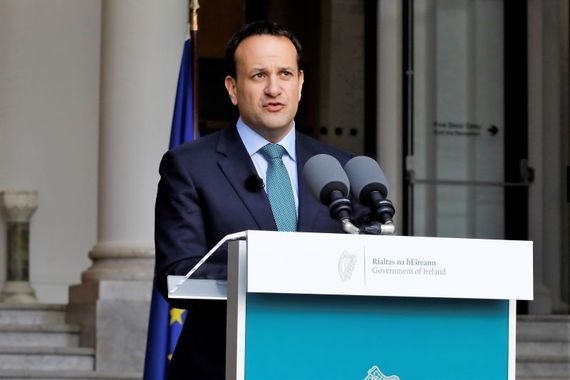 Leo Varadkar includes references to historical or cultural figures in a number of his most high-profile speeches. Rolling News

When Peter Jackson filmed an emotional scene at the end of the Lord of the Rings: The Two Towers, it is doubtful whether he ever envisaged an Irish Taoiseach (Prime Minister) Leo Varadkar quoting the scene verbatim in the midst of a pandemic some 18 years later.

Yet that is exactly what happened - a telling sign of the strange times we live in.

Taoiseach Leo Varadkar may have divided opinion over his handling of the COVID-19 pandemic, but absolutely everyone can agree that he loves to reference anything from Irish poets to Hollywood blockbusters in his many speeches during the pandemic.

With that in mind, we looked at some of his more noteworthy references.

The Lord of the Rings

Varadkar unleashed his inner hobbit during his speech last Friday as he announced Ireland was ready to commence Phase 2 of the roadmap to exiting lockdown.

The Taoiseach delivered a seemingly inspirational message of hope when he promised better days ahead and said: "In the end, it's only a passing thing, this shadow, even darkness must pass. A new day will come, and when the sun shines, it'll shine out the clearer."

If those words sound familiar, then you've probably watched the Lord of the Rings at least once in your lifetime because Samwise Gamgee said the exact same thing when trying to inspire Frodo at the end of the second installment of the famous franchise.

Varadkar's first and most controversial reference came during his St. Patrick's Day address when COVID-19 in Ireland was still in its infancy.

The Taoiseach paraphrased Winston Churchill's famous wartime speech "Never was so much owed by so many to so few" during the address, causing indignation among some nationalists that Varadkar would choose to quote the controversial Churchill on Ireland's national holiday.

Varadkar reworked the quote to reflect current events and used it to honor healthcare staff rather than the British Air Force.

"Never will so many owe so much to so few," he said on St. Patrick's Day.

Read more: “We are in this together” - Irish leader delivers historic State of the Nation

The Taoiseach appeared to jump on the Dermot Kennedy bandwagon just days after the singer gave a memorable performance on the Late Late Show.

Varadkar addressed the nation shortly after that performance as Ireland prepared to ease lockdown restrictions and his speech appeared to include lyrics from a song Kennedy performed on the talk show.

"Not long from now some summer night, we will see our friends again," Varadkar said, appearing to reference Kennedy's "All My Friends."

The singer took to social media to proclaim that he was delighted that his song featured in a national address.

This was a moment that made me extremely proud. Proud to be Irish, and proud of how we’re looking out for each other through this time. Grá Mór. We’ll be good soon 🇮🇪 X pic.twitter.com/f5Yn7AL1Cd

Without a doubt, the most bizarre reference of the whole lot, Varadkar really did reference the second installment of the Terminator franchise when he announced the lockdown on March 27.

In an apparent attempt to stir the Irish nation to follow the lockdown restrictions and beat back the virus, Varadkar delivered an uplifting message.

"There is no fate but what we make for ourselves," he said, copying a line from "Terminator 2: Judgement Day" to the letter.

Varadkar referenced the famous Irish poet in his national address just before Easter, but he did at least credit Seamus Heaney during the speech.

The Fine Gael leader used a quote from Heaney talking about the Troubles to bring a message of hope ahead of Easter weekend.

"If we can winter this one out, we can summer anywhere," Varadkar said, directly quoting Heaney.

So, it seems as though the Taoiseach has a penchant for referencing famous historical and cultural figures in his many speeches during the COVID-19 pandemic, and only one question remains; who is he going to reference next when he announces Phase 3 at the end of June?