Katie Taylor: Croke Park rematch with 80,000 fans showing up next on her list?

Irish boxer Katie Taylor made history on Saturday night as she and Amanda Serrano became the first females to headline a boxing match at Madison Square Garden in NYC. 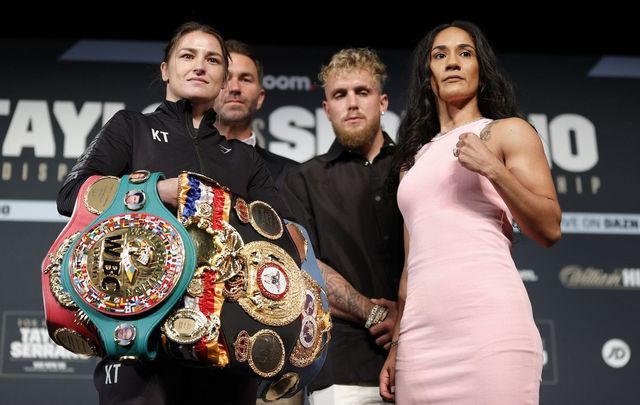 April 28, 2022: Katie Taylor of Ireland (L) and Amanda Serrano of Puerto Rico (R) face off during a press conference prior to their World Lightweight Title fight at The Hulu Theater at Madison Square Garden in New York City. Getty Images

Irish boxing champ Katie Taylor made history with a split decision against Amanda Serrano in the main event at Madison Square Garden on Saturday night, the first time a women’s boxing match was center stage at the storied venue.

Predictions that 80,000 would show up for a rematch in Dublin's Croke Park proved how Taylor has transformed the sport at age 35, unbeaten and an Olympic champion.

It was a remarkable fight with both boxers giving it everything in the final round as they stood toe to toe and let fly.

Two judges gave Taylor the victory while the third scored for Serrano, a Puerto Rican native.

MSG was awash in green as the New York Irish came out in huge numbers to support Taylor in what proved an epic fight. Taylor looked out on her feet during the fifth round when hit with a series of heavy blows, but she weathered the storm and staged a comeback in the second half of the fight.

The long-awaited duel between two of the best female professional boxers around lived up to the hype. Taylor, from Co Wicklow, and Serrano fought in front of a sell-out attendance of 19,187.

“This is just a special occasion for me, to headline a huge fight like this at Madison Square Garden. It’s being billed as the biggest fight in female boxing history. This is just incredible and a real privilege for me,” said Taylor.

“I love being involved in these kinds of fights. These are the challenges that I’ve always wanted. I don’t think I’ve ever backed down from any challenge. I’ve wanted to face the very best.”

And make no mistake, Serrano is one of the very best. The 33-year-old Brooklyn-based fighter has been a champion in seven different weight classes and possesses powerful hands, with 71.43 percent of her wins coming via way of knockout.

Serrano is confident that she will emerge as the winner of this super fight.

“My plan is to fight smart, to be smart on April 30. I know I have all the tools to beat Katie Taylor, I just have to go out there and be smart – victory will be mine,” she said in the build-up to the fight.

“I have everything. There’s no questioning my heart, my skills, my power, and my chin. There’s nothing I think Katie Taylor has that will answer the questions that need to be answered.”

Serrano’s profile has risen considerably since she signed with Jake Paul’s Most Valuable Promotions company. She has fought on two undercards of Paul fights (the social media personality has fashioned a lucrative career as a professional boxer, taking on other social media celebrities and former MMA fighters). Serrano fought last in December 12 in Tampa when she defeated Miriam Gutierrez by unanimous decision.

Taylor was last in action on December 11 when she defended her titles with a UD win over Firuza Sharipova (14-2). Taylor didn’t look as sharp as usual on that night, and the dip in performance raised a few questions about whether the miles on the clock might be catching up with the Wicklow woman. Taylor allayed some of those concerns last month when she told The DAZN Boxing Show that she fought her last two assignments with a torn calf.

That said, Taylor will have to be 100 percent healthy for this challenge. When she lets her boxing skills flow and sticks to whatever game plan that she and trainer Ross Enamait conjure for their opponent, she usually cruises to victory.

However, when her heart overrules her head and she stops moving and decides to brawl instead of box, she can leave herself vulnerable. Case in point was her two fights against Delfine Persoon.

The first fight took place at MSG on June 1, 2019, and was all-out war, with both women tearing into each other from start to finish. Taylor was almost out on her feet at the final bell but eked out a somewhat controversial majority decision win.

In the rematch on August 22, 2020, Taylor boxed clever instead of cavalier and won in a far clearer fashion via unanimous decision.

Whether Taylor the brawler or Taylor the boxer turns up this weekend might be a key factor in the outcome, as Serrano has the power to punish any mistakes.  Taylor defeated Serrano’s sister Cindy, herself a former world champion, in October 2018 and is very familiar with her foe, who is trained by Jordan Maldonado.

The significance of this fight for women’s boxing cannot be underestimated. Paul revealed to TMZ Sports recently that both women would each get a “seven-figure payday” for this fight.

Interest in the fight has been strong and Matchroom Sport chairman Eddie Hearn confirmed that the ticket pre-sale for this fight was the second biggest in the 140-year history of the Garden.

It’s a long way from Taylor’s start in boxing when she had to pretend to be a boy to compete in the early days of her fighting career. From amateur to professional, Taylor has blazed a trail for women’s boxing and points out that Serrano too has been instrumental in raising the profile of their sport.

“Amanda Serrano is a fantastic fighter, she’s a great champion and she’s not here for no reason,” Taylor said.

The fight is being streamed on DAZN and is scheduled for 10 two-minute rounds. Any remaining tickets can be found at ticketmaster.com.