The Louisville Lip, who was incredibly proud of his County Clare roots, used the "rope-a-dope" tactic to defeat Foreman in a thrilling upset following an eighth-round stoppage. 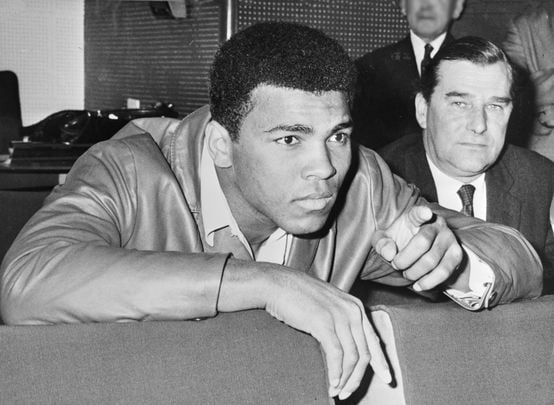 Boxing legend Muhammad Ali became World Heavyweight champion for the second time on this day in 1974 after defeating George Foreman in the "Rumble in the Jungle" in Zaire, modern-day Democratic Republic of Congo. To mark the anniversary, we take a look at Ali's proud Irish roots.

The Louisville Lip, who was incredibly proud of his County Clare roots, used the "rope-a-dope" tactic to defeat Foreman in a thrilling upset following an eighth-round stoppage. At the height of his career, Ali was the most graceful, talented, and brilliant heavyweight boxer who ever stepped inside the ropes.

Though incapacitated by Parkinson's in later life, he always managed to retain the star power and unique presence that always distinguishes the greatest.

I remember seeing him enter the room at the American Ireland Fund dinner in 2011 and grown men, including the Irish leader Enda Kenny, were simply awestruck that they were in the presence of the greatest living legend.

Ali was more than a boxer, of course, he was a fighter who refused to become cannon fodder in the Vietnam War, the greatest mistaken war America entered until the invasion of Iraq. He was also a poet, a showman, a lover of many women, a devout Muslim, and simply a legend.

Ali's stance to end the Vietnam War when he refused to be drafted cost us the best years of his sporting life. He came back still a brilliant boxer, but the man who could float like a butterfly could never quite recover that greatness.

Still, the fights with Joe Frazier, the rope-a-dope that saw him defeat George Foreman in Zaire in the "Rumble in the Jungle" will forever enshrine his name in history.

The astonishing fact that he had Irish roots, being descended from Abe Grady, an Irishman from Ennis, County Clare, only became known later in life.

He returned to Ireland where he had fought and defeated Al “Blue” Lewis in Croke Park in 1972 almost seven years ago in 2009 to help raise money for his non–profit Muhammad Ali Center, a cultural and educational center in Louisville, Kentucky, and other hospices.

He was also there to become the first Freeman of the town.

The boxing great is no stranger to Irish shores and previously made a famous trip to Ireland in 1972 when he sat down with Cathal O’Shannon of RTE for a fascinating television interview.

In the 1860s, Abe Grady left Ennis in County Clare to start a new life in America.  He would make his home in Kentucky and marry a free African-American woman.

The couple started a family, and one of their daughters was Odessa Lee Grady. Odessa met and married Cassius Clay, Sr. and on January 17, 1942, Cassius junior was born.

Ali, an Olympic gold medalist at the 1960 games in Rome, has been suffering from Parkinson's for some years but was committed to raising funds for his center

During his visit to Clare, he was mobbed by tens of thousands of locals who turned out to meet him and show him the area where his great-grandfather came from.

Historian Dick Eastman had traced Ali’s roots back to Abe Grady the Clare emigrant to Kentucky and the freed slave he married.

Eastman wrote: “An 1855 land survey of Ennis, a town in County Clare, Ireland, contains a reference to John Grady, who was renting a house in Turnpike Road in the center of the town. His rent payment was fifteen shillings a month. A few years later, his son Abe Grady immigrated to the United States. He settled in Kentucky."

Also, around the year 1855, a man and a woman who were both freed slaves, originally from Liberia, purchased land in or around Duck Lick Creek, Logan, Kentucky. The two married, raised a family and farmed the land. These free blacks went by the name, Morehead, the name of white slave owners of the area.

Odessa Grady Clay, Cassius Clay's mother, was the great-granddaughter of the freed slave Tom Morehead and of John Grady of Ennis, whose son  Abe had emigrated from Ireland to the United States. She named her son Cassius in honor of a famous Kentucky abolitionist of that time.

When he changed his name to Muhammad Ali in 1964, the famous boxer remarked, "Why should I keep my white slavemaster name visible and my black ancestors invisible, unknown, unhonored?"

Ali was not only the greatest sporting figure, but he was also the best-known person in the world at his height, revered from Africa to Asia and all over the world.

To the end, he was a battler, shown rare courage fighting Parkinson’s Disease, and surviving far longer than most sufferers from the disease.