On this day Jeremiah O'Donovan Rossa, the Irish Fenian leader and member of the Irish Republican Brotherhood, died in Staten Island, NY. 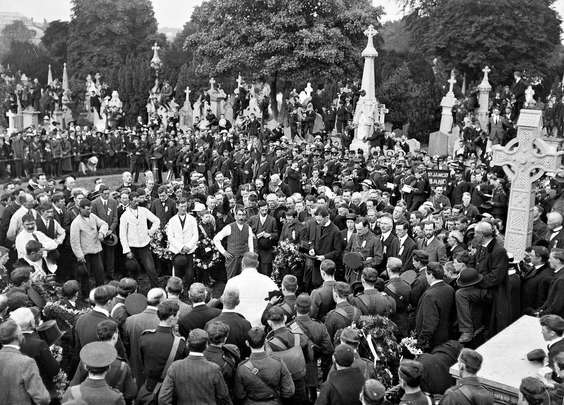 Like a lot of the Fenians, Rossa was a very tough character. His family in West Cork was fairly comfortable until the time of the famine, which destroyed it. It was the trigger that set him afire with nationalism. The odd thing about Rossa is that he never got to fight in any of Ireland’s battles. As plans were being made for a rising in 1865—it was postponed until 1867—he was arrested in Dublin and sent to British prisons where, under brutal conditions, he would live for the next five years. He was freed in an amnesty and sailed for America, arriving in 1871 as a member of the Cuba Five, which included John Devoy who he had met in prison.

Rossa's personal life was as complicated as his political one. He was married three times with his first two wives dying at a young age. In all, he fathered 18 children. In America, he was famous for the dynamite campaign he waged in Britain during the 1880s. Ironically, one of his bombers was Tom Clarke who would be a central character in his final sendoff. During his time in New York, he challenged the Fenian John Daly to a duel which never took place. He was also shot by a deranged British woman named Dudley because of his dynamite campaign but survived to live another 30 years.

When Rossa died, Clarke said, “if Rossa had planned to die at the most opportune time for serving his country, he could not have done better.”

In one of the great shows of nationalistic theatre (Devoy once said: “No matter how the Irish treat a leader when living—and the treatment is often very bad—they never fail to give him decent burial”) Clarke paraded the body around Dublin as if he had found the Fenian Lazarus. (This idea of using the honored dead as props might have led the British to bury the executed 1916 leaders in a quicklime mass grave to avoid this kind of propaganda.)

Rossa laid in-state at the City Hall and was given a funeral mass at the Pro-Cathedral. Thousands followed his coffin to Glasnevin Cemetery on August 1st where Patrick Pearse gave his famous speech: “…the fools, the fools, the fools! — They have left us our Fenian dead, and while Ireland holds these graves, Ireland unfree shall never be at peace.”

Rossa’s funeral was the unofficial launch of what would become the Easter Rising eight months later.

For the full story, read more about it in Real Irish New York which is available in hardcover and Kindle from Amazon.com.

* Dermot McEvoy is the author of the recently published Real Irish New York: A Rogue’s Gallery of Fenians, Tough Women, Holy Men, Blasphemers, Jesters, and a Gang of Other Colorful Characters. He is also the author of The 13th Apostle: A Novel of Michael Collins and the Irish Uprising and Our Lady of Greenwich Village, both now available in paperback, Kindle and Audio from Skyhorse Publishing. He may be reached at dermotmcevoy50@gmail.com. Follow him at www.dermotmcevoy.com. Follow The 13th Apostle on Facebook at www.facebook.com/13thApostleMcEvoy.

Trading places: Ireland moves forward while Supreme Court hurtles US back to the Stone Age