On This Day: Jeremiah Mee leads the Listowel Mutiny

Jeremiah Mee stood up in defiance to Lieutenant Colonel Smyth of the Royal Irish Constabulary in June 1920. 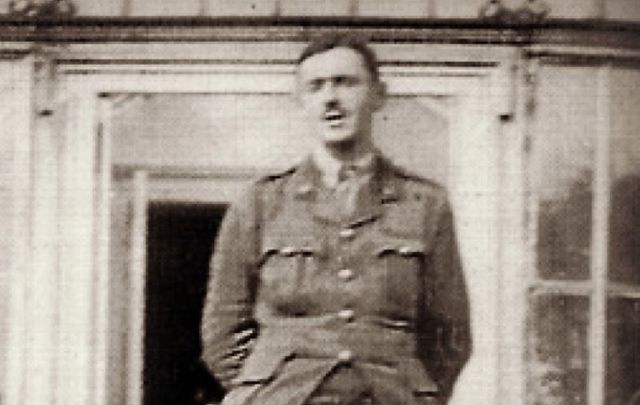 One hundred years ago today, June 19, (some sources give June 17 as the date. Others name 19 June. All refer to the same incident), Royal Irish Constables in Listowel, County Kerry, were shoved over the edge of blind obedience when they listened to the following speech delivered by Lieutenant Colonel Smyth, recently appointed Divisional Police Commissioner for Munster:

“Well men, I have something of interest to tell you, something that I am sure you would not wish your wives to hear. I am going to lay all my cards on the table; I may reserve one card for myself.

"Now, men, Sinn Féin have had all the sport up to the present, and we are going to have the sport now. The police are not in sufficient strength to do anything to hold their barracks. This is not enough for as long as we remain on the defensive, so long will Sinn Féin have the whip hand. We must take the offensive and beat Sinn Féin at its own tactics. Martial law, applying to all Ireland is to come into operation immediately, as a matter of fact we are to have our scheme of amalgamation complete on June 21st. I am promised as many troops from England as I require, thousands are coming daily. I am getting seven thousand police from England.

"Now men what I wish to explain to you is that we are to strengthen your comrades in the country stations. The military must be quartered in the large towns for the following reasons:

"First, they must be convenient to railway stations to enable them to move rapidly from place to place as occasion demands.

"Second, unlike police, soldiers cannot act individually and independently but only in large numbers under a good officer, and he must be a good officer, otherwise I shall break him for inefficiency.

"Third, if a police barracks is burned or if the barracks already occupied is not suitable, then the best house in the locality is to be commandeered, the occupants thrown into the gutter. Let them die there — the more the merrier.

"Fourth, police and military will patrol the country at least five nights a week. They are not to confine themselves to main roads, but to make across the country, lie in ambush and when civilians are seen approaching shout ‘Hands up.’

"Fifth, should the order ‘Hands Up’ not be immediately obeyed, shoot and shoot with effect. If the persons approaching a patrol carry their hands in their pockets, or are in any way suspicious looking, shoot them down. You may make mistakes occasionally and innocent persons may be shot, but that cannot be helped, and you are bound to get the right parties some time. The more you shoot, the better I will like you, and I assure you no policeman will get into trouble for shooting any man.

"Sixth, hunger-strikers will be allowed to die in jail, the more the merrier. Some of them have died already and a damn bad job they were not all allowed to die. As a matter of fact some of them have already been dealt with in a manner their friends will never hear about. An emigrant ship left an Irish port for a foreign port lately with lots of Sinn Feiners on board, I assure you men it will never land

"That is nearly all I have to say to you. General Tudor and myself, want your assistance in carrying out this scheme and wiping out Sinn Féin. Any man who is prepared to be a hindrance rather than a help to us, had better leave the job at once.”

The content of this talk was delivered to Michael Collins by one of the R.I.C. men who was present. “Now Men" justice should be swift and ruthless. (signed) ____________. (illegible scribble).

Quoted from the Pat Purcell Papers:

Read More: What goes around, comes around during Ireland's War of Independence

Constable Jeremiah Mee took a stand! After the particularly inciting speech (see above) to go after the Volunteers and have no qualms about killing them, Constable Mee put his gun on the table and refused to have anything more to do with the force. Other policemen present followed his example, and the affair became known as the “Listowel Mutiny.” This episode finally hit print in the Irish Bulletin on 9 July, raising some ire and some questions in the British parliament.

What of the leading actors in this drama?

Constable Jeremiah Mee, a native of Glenamaddy, Co. Galway, had been transferred to Kerry from Grange, Co. Sligo, in July 1919. After his refusal, he and his cohort, John O’Donovan, who had served in County Sligo from 1914 to 1919 in Skreen, Keash, Mullaghroe, and Ballymote, returned to Sligo and joined the IRA. Another constable, Thomas Doherty from Carrowmacbrine, Rathlee, Sligo, resigned from the force soon after. Two of his brothers, Bartly and Patrick, who were serving in Mayo and Offaly, also bid farewell to the RIC within ten days (Sligo 1914−1921 A Chronicle of Conflict by Michael Farry, pp. 236−237) and (“Listowel Mutiny Leader Honoured,” The Kerryman, 25 August 1989, p. 2)

British Col. Gerald Bryce Ferguson Smyth, the man who delivered this speech in Listowel, was assassinated by the IRA on 17 July 1920.