Irish Tears, a new book, is a bold indictment of all the powers that be in Ireland whose actions left thousands of families homeless and living in fear. 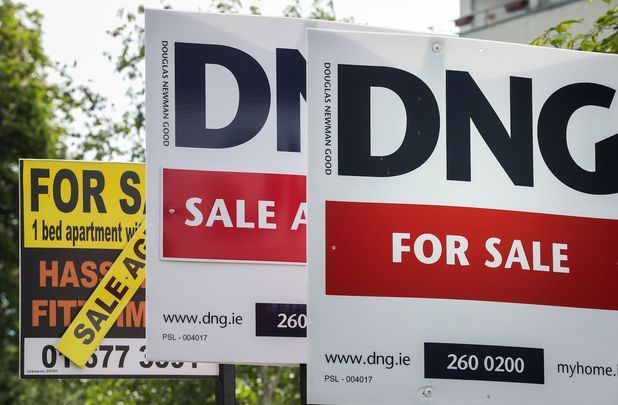 For sale and for rent signs in Dublin. Rolling News

“She parked her car at an Aldi shopping center in East Wall, in Dublin’s North inner city, for a couple of safe hours. She had no hotel room or emergency accommodation, no petrol to waste. Just a Ford Focus to hold her entire family.”

These are the words of an Irish mother who lost her home to one of Ireland’s pillar banks through a  forced eviction for falling behind on her mortgage payments.

Anne and her children ended up living in their old family car with little or no help from the State as she did not have a permanent address to claim a social welfare payment. Exposed to dangers and situations that she never knew existed;  Anne was condemned to a life that even animal rights groups would condemn.

One man's struggle against the system

This is the opening chapter in a new book about one man’s struggle against Irish banks, International vulture funds, and the Irish State itself. Often targeted because he is outspoken and a willing voice for those who are fighting, not just to save their homes, but often their livelihoods and careers as well.

Tom Darcy’s stinging new book called “Irish Tears” is a book of life experiences and hard lessons. The book lays out his ongoing battle against “the system” and how that same system joined forces to not just destroy his and his family’s life, but also to teach the rest of us a salutary lesson in why you shouldn’t take on the establishment.

Tom Darcy hails from a comfortable middle-class background and grew up in the beautiful fishing village of Howth on Dublin’s northside. Darcy, like many others, saw an opportunity to make money during the Celtic Tiger days and became a property developer, and like many developers of the time,  he borrowed heavily. Then came the great crash and subsequent recession of 2008 and there was nothing that he or his fellow property developers could do to save their businesses.

In his book, Darcy devotes a section called “who is to blame” in which he points the finger at what  he calls “the real criminals.” He squarely points that index finger at the banks themselves because they [as he says] were insolvent just before 2008 but yet carried on trading. He goes on to say that

“They declared themselves bankrupt in February 2008, together with every other corrupt Irish  banking institution, and once again, in the obvious absence of impartial investigative journalism,  these glaringly scandalous black holes of Irish banking corruption remain silenced.”

In essence, Darcy is claiming that banks were guilty of “interest manipulation, mortgage misselling,  banking fraud, and financial criminality,” which demonstrates the illicit behavior of bankers, but yet no Irish banker has been jailed for this criminality. Darcy claims that corruption and collusion are at the heart of the failure to hold banks and their directors responsible for the greatest criminal act ever seen in the country.

According to his book, Tom Darcy himself has been in and out of the Irish Courts for the last thirteen years trying to obtain justice but, in reality, fighting a system that has joined forces and conspired against not just him, but thousands of people who are being channeled through the legal system,  day in and day out while trying to keep a roof over their heads. Darcy, in his book, clearly explains how the State itself, the entire legal system, and the Gardai have protected the banking system to the detriment of the Irish economy and the citizens who are still feeling the fallout from the bank bailouts of 2008.

Darcy makes no bones about it when he puts the blame on the judiciary for its complicity in protecting the financial system. Darcy puts his reputation on the line where defamation is concerned when he accuses members of the Irish Bench of protectionism towards the banks and vulture funds simply because they are in debt themselves to the very same banks and vulture funds that the defendants before them are. Perhaps, this claim keeps certain judges in line for fear of their debts to the financial institution being publicly exposed. To date, Darcy has not been sued!

Darcy’s first book “Waiting for the Sheriff” was a sensational exposé of the wrongdoings of the Irish state and how the state assisted the banks and vulture funds in forced evictions of people who couldn’t pay their mortgages. Darcy noted that new laws were being introduced by the legislature in favor of banks and vulture funds, but none were drawn up to help mortgage holders who were being dispossessed in their thousands every year.

Perhaps one of the most interesting sections of the book is where Darcy believes that there is a  simple way of forcing vulture funds to negotiate with people. In 2018, Europe introduced new legislation that forces companies to be more than careful with their private information but also to be obliged to provide what information and data they keep on you as a private citizen. This legislation, according to Darcy, is the Achilles heel for the vulture funds.

He goes on to say: “The GDPR legislation puts vulture funds under pressure to answer many questions that they do not or will not answer when it comes to how they purchased your mortgage and all the intricacies and secrets that they don’t want you to know about.

For those who are in trouble with their bank or vulture fund, the GDPR document can be downloaded from Tom Darcy’s website “https://waitingforthesheriff.com. Darcy states that this document can be the difference between losing your home in the courts or being able to force a  negotiated settlement with the vulture funds and keeping your home. In essence, this book exposes the dark side of the Irish State, the banking cabal, and the legal fraternity’s protection of the one percent.

You can buy the book for £9.99 using the publisher’s link:

https://olympiapublishers.com/books/irish-tears-a-nation-betrayed or in any good bookstore.

You can also look up Tom’s Facebook page which gives you more information on the subject.