IrishCentral contributor Dan Haverty argues that the realignment of Irish politics since the general election in February actually marks the return of Civil War politics. 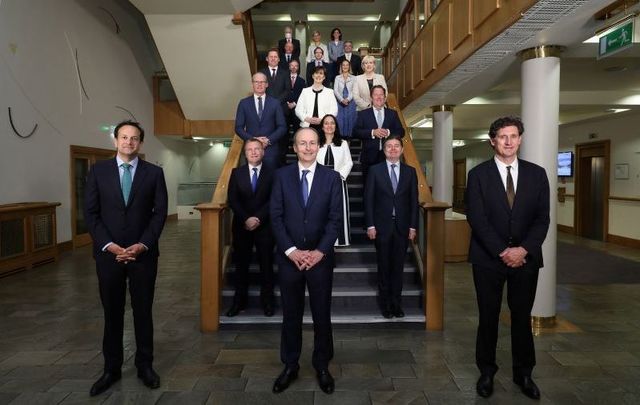 History has an odd habit of repeating itself.

Broadly speaking, the peculiar phenomenon known as Civil War politics is defined as the instinctive disagreement between Fianna Fáil and Fine Gael on most issues, despite both parties sharing almost identical political outlooks. But this characterization misses the fundamental cause of their dispute: the actual politics of the Civil War and the competing conceptions of the Irish state that drove the conflict.

That struggle had already threatened to split the movement as early as 1917, but the leaders of both factions ultimately agreed that their shared ambition of an independent Ireland gave them unity of purpose against British rule, and Arthur Griffith’s acquiescence to Eamon De Valera as Sinn Féin president in October 1917 effectively passed the leadership of the movement to the republicans. But the continued presence of the more moderate constitutional nationalists in positions of power ensured that a clash for the soul of the movement—and of Ireland—awaited.

Although neither side ever claimed exclusive ownership to any of Irish nationalism’s myriad of aims and ideals, constitutional nationalists generally preferred a form of independence that preserved the core aspects of the status quo, including strong political, economic, and cultural ties to Britain. Republicans, on the other hand, not only believed in severing all links to Britain, they also prioritized the cultivation of Ireland’s cultural and religious heritage in order to assert the distinctiveness of the Irish nation.

Fine Gael and Fianna Fáil trace their origins to these traditions, respectively. The signing of the Anglo-Irish Treaty—which, among other provisions, stipulated that Ireland would continue to recognize the authority of the British Crown as a dominion—at the conclusion of the War of Independence brought these differences to the fore. As a consequence, a sizeable faction of republicans opposed to the Treaty split from Sinn Féin and the IRA, taking up arms against the new Free State.

Near the end of the Civil War, when victory for the Free State was all but assured, the pro-Treaty faction formed Cumann na nGaedheal—Fine Gael’s predecessor—and turned its focus to constructing and legitimizing the infrastructure of the new state. The direction of Irish politics thus turned to this process of state-building, and the national question became the priority only for an increasingly marginal group of dedicated republicans.

Moderate elements within the anti-Treaty faction eventually realized they could not achieve their aims outside the new institutions, resolving to form Fianna Fáil with the stated aim of dismantling the Free State and republicanizing it from within.

Fianna Fáil’s formal entrance into constitutional politics in 1927 thrust the national question back into the spotlight. The party took power for the first time in 1932, and the rest of the decade was shaped by its aggressive campaign of tearing down the last remnants of British rule. That process was completed in the south with the ratification of a new constitution in 1937 which essentially turned the country’s southern 26 counties into a republic.

The politics of the Civil War lost much of its relevance with the passage of the new constitution, but it lingered on in a more subtle way due to the controversial existence of Northern Ireland—the only unresolved issue leftover from the Treaty. Fianna Fáil found it convenient to deploy the language of anti-partition when it was politically advantageous, but it did little to actually effect the unification of the country.

This approach paid off for the party during the three decades between 1937 and 1969, but as the Civil War faded into history and Fianna Fáil spent more time maturing, it became more deeply enmeshed in the mainstream, marking itself out as an indistinguishable part of the political establishment. By the end of the 1960s, Fianna Fáil was still credibly republican but no longer revolutionary, putting it in an awkward position when the Provisional IRA launched its armed campaign at the beginning of the next decade.

A faction within the party wanted to actively support the beleaguered northern nationalist community, and some high-ranking members even arranged to send money for arms to the nascent Provisional IRA. But that element was outmaneuvered by party leader Jack Lynch, who staved off a possible split in the party and brought it mostly in line with the anti-republican approach then being pursued by the British government and the other major Irish parties, including Fine Gael. Fianna Fáil, it seemed, was satisfied with the republic as it was.

It was this fusion of Fianna Fáil and Fine Gael’s different visions for Ireland in the early 1970s that really brought Civil War politics to an end: The transformation of the state in the 1930s meant that Fianna Fáil had won an acceptable portion of its republic, and the reconciliation of anti-Treaty republicans with the state meant that Fine Gael had tempered the excesses of republicanism.

This nationalist consensus operated in Dublin largely unimpeded until 2016, when Brexit disrupted the usual state of affairs by making Irish unification a relevant policy position again, before being fully upended after Sinn Féin’s stunning electoral performance at the general election in February.

Like Fianna Fáil, Sinn Féin traces its ideological heritage to the anti-Treaty republican tradition. But unlike Fianna Fáil, Sinn Féin only became reconciled with the state in the recent past. For that reason, many of its members still view the state with extreme skepticism, and the party’s highest objective remains the undoing and remaking of that state. Fianna Fáil and Fine Gael’s abdication of the opposition benches in June opened space for Sinn Féin to reinject a staunchly republican voice into the political debate and push the national question back to the forefront of Irish politics.

One recent example is illustrative of this shift. Speaking to the Dáil on July 7, Sinn Féin President Mary Lou McDonald urged the government to make Irish unification a priority, saying “a united Ireland is the best idea for the future of our country.” Referring implicitly to the impact of the coronavirus pandemic, she said “protecting our health service requires an all-Ireland approach.”

But the government pushed back. Fianna Fáil leader and Taoiseach Micheal Martin told McDonald that the newly established Shared Island Unit was working to address those issues but dismissed the idea of a border poll as “too divisive, too partisan and would only run counter to what you wanted to achieve.” Since the outbreak of the Troubles in 1969—and especially since the signing of the Good Friday Agreement in 1998—both the party in government and that in opposition have been in virtual lockstep on Northern Ireland. As this exchange demonstrates, that is no longer the case.

In broad terms, it also shows that Ireland’s main political poles have taken opposing views on the future of the state itself, occupying positions that parallel those taken by Fine Gael and Fianna Fáil in the first decades after the Civil War. Republicans (now represented by Sinn Féin) want outright unification and the Gaelicization of Northern Ireland, whereas constitutional nationalists (now represented by both Fianna Fáil and Fine Gael) would prefer to maintain some version of the status quo. The composition of the state is now up for debate, meaning the politics of the Civil War will once again form a key part of the national political conversation into the foreseeable future.