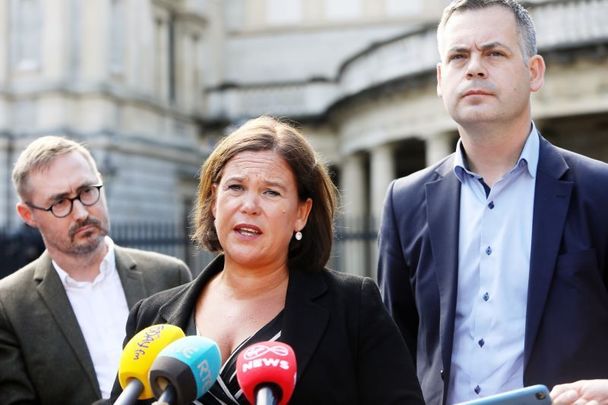 Sinn Féin in the North was the model for the Republic renaissance.  In the North they built an incredible political machine that moved the party into the Northern Ireland mainstream and natural partner in government after decades of isolation.

The working model was clear. After The Troubles, take the logical step into politics. Create a progressive agenda, train young, smart potential politicians, put them forward for elections, and once elected simply outwork everyone else to help build a coherent movement.

Because of The Troubles, Sinn Fein was able to rely on men and women seasoned in political debate and thought.  The hard years resulted in extreme political awareness and a supply line of talented young men and women forged by experience.

There was always a plan and a long term view taken of the project.  Sinn Féin thinks in terms of decades, not months or years.

They were soon in government in the North. But that talent pool wasn't so obvious in the south, and the disparity in talent was plain to see for many years.

The Troubles had been a more distant phenomenon and the political awareness left a lot to be desired. But the pattern in the North slowly began to take hold in the Republic.

Hard-charging political naturals like Mary Lou McDonald, Pearse Doherty, and Eoin O Broin came to define the party in the south -- young, professional and extremely talented with a strong left-of-center program aimed at the young and the have-nots, classic European-style socialism with Irish nationalism thrown in.

The party had been growing its support base for several elections, but outside events conspired to create the perfect storm for their ambitions this year.

The united Ireland issue was hardly on the public agenda during the election, but it was a powerful sub rosa theme.

Those who say Brexit had no impact on the Irish election miss the point that the Irish public was incensed by the British attitude to Brexit, all of which fed into the Sinn Fein narrative that the response to English nationalism was non-violent Irish republicanism.

In McDonald Sinn Fein had the ideal mix for leadership -- female, confrontational when necessary, quick on her feet. Her ability to debate and win over critics was a defining factor.

Even when the anti-Sinn Fein establishment threw everything but the kitchen sink at the party in the closing days of the election, portraying them as barbarians at the gate, McDonald kept her cool and her eye on the prize.

She successfully painted her rivals, Fianna Fail leader Michael Martin and Taoiseach Leo Varadkar, as “Tweedledum and Tweedledee.” The electorate appeared to agree.

McDonald stuck to an overall positive message solution-oriented on issues such as housing and health and not the endless carping and complaining that can bedevil the left.

The message from the beginning was disciplined, visionary, upbeat, all about listening to people, conciliatory not confrontational, the future, not the past.
A great opportunity had arisen because of the Brexit fiasco and a deep well of dissatisfaction among the electorate. Sinn Fein is the future was the subtext.
It worked beyond the party’s wildest dreams.