Francis X. Murphy, the son of Irish immigrants who grew up in the Bronx parish of St. Angela Merici, later joined the Redemptorists and became a theology professor, as well as a Navy chaplain. 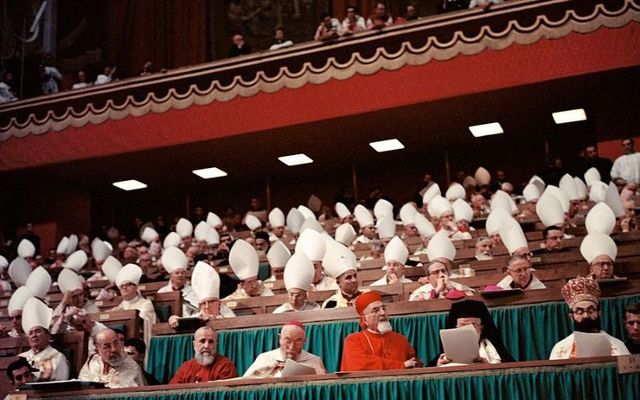 To be an American Catholic is to be many things – but, most of all, confused.

One day, I’m angry and outraged about some bishop or priest who has obviously chosen sides in the culture wars, not just about abortion, but Hunter Biden’s laptop.

Then the next day – hell, the next minute – I’m all defensive because yet another well-paid, well-raised professor from Harvard or NYU seems to feel they are a natural ally to the downtrodden.

And they rant and rave in defense of (say) immigrants, even if their supposed enemy – Sean Hannity or maybe Florida Governor Ron DeSantis – wouldn’t be in this country if not for, you know, downtrodden immigrants.

Last week was an angry one. I finally got around to reading a long, stunning article in The New York Times Magazine about a generation of “stolen babies” in Spain – parents who were lied to, and told their babies had died at birth. When in fact they were snatched, usually with the approval of priests, nuns, or other local Catholic officials, and taken to more wealthy families.

Needless to say, the Irish have had their own cruel run-ins with Catholic authorities.  This is the stuff of horror movies.

And this stuff didn't happen in the 16th century.

We’re talking about the damn 1980s and 1990s here. Following a brief moment of hope that this centuries-old church would look honestly at its past, at its collaborations with brutal regimes.

And at least try to atone. Try to get back to, as Pope John XXIII put it, “The simple, pure lines that the face of the church of Jesus had at its start.”

That was 60 years ago now, a brief moment of hope commonly called Vatican II.

“The second Vatican Council…was the most important Catholic event in half a millennium,” longtime Vatican watcher George Weigel wrote in The Wall Street Journal last week, in an essay based on a new book called To Sanctify the World: The Vital Legacy of Vatican II.

Weigel adds that the “achievements (of Vatican II) were many and notable” and that it was “followed by ecclesiastical upheavals that continue to roil the church today.”

But our understanding of what happened at Vatican II, a “meeting” that ultimately lasted three years, would be far worse if not for a Bronx Irishman.  His name was Xavier Rynne.

“No one knows just what will be accomplished by the Second Vatican Council,” wrote Rynne on October 20, 1962, in the Jesuit magazine America.

And with a flourish of optimism, he added, “It may be that in an age of increasing complexity, the Holy Spirit is urging the church to insist on the fundamental facts of divine revelation, leaving the intricacies of disputed theories to some future, calmer generation and putting a cloak of charity over the disagreements of the present day. Should such be its function, the Second Vatican Council will prove to be the incredible blessing that Pope John intends it to be.”

But it was at another magazine where Rynne became famous – even if that was not his real name.

Rynne was actually Francis X. Murphy, the son of Irish immigrants who grew up in the Bronx parish of St. Angela Merici.  Murphy later joined the Redemptorists and became a theology professor, as well as Navy chaplain.

When Vatican II got underway, there was a frantic search for any decent writers who could also mingle inconspicuously amongst the Catholic cardinals and other power brokers.

Murphy agreed to write reports from Rome for The New Yorker, a bastion of (let’s be honest) anti-Catholicism.

(Two months ago the magazine’s website posted about the “sins of the high court’s supreme Catholics.”)

To hide his identity, Murphy used his own middle name and his mother’s maiden name.

“Especially in the United States, the left/right decision of all things Catholic…was quickly set in reportorial and editorial concrete by” Rynne’s reports.

Which had their critics. Many charged that Murphy oversimplified complicated matters.