The IRA models behind Sean Keating's famous painting, Men of the South 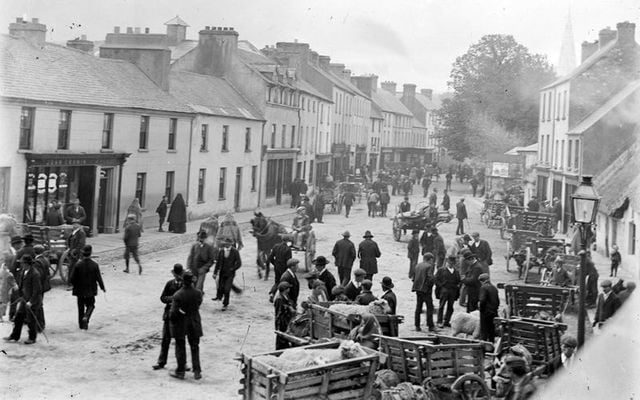 College Street, in Killarney, during Ireland's War of Independence. NLI

Sean Keating's famous War of Independence painting Men of the South has its roots in the spring of 1921 when Commandant of the North Cork IRA, Sean Moylan, was on trial for treason against the crown.

Albert Wood K.C represented Sean Moylan who was destined to be found guilty but was saved when the truce was announced that summer and the IRA Commandant walked free.

Wood was a patron of the arts and became great friends with Moylan. He was also good friends with the Limerick artist, Sean Keating.

In August 1921, Moylan was in Dublin and met up with his friend Albert Wood. They visited the National Gallery where Wood suggested to Moylan that he should sit for a portrait for Sean Keating. Moylan reluctantly agreed.

During the sitting, Moylan grew comfortable with the Limerick artist. He spoke to Keating about the exploits of the North Cork IRA and those tales of daring freedom fighters gave Keating an idea. He formed a picture in his mind of men in the hills wearing trench coats with weapons ready. He pictured in his mind the Men of the South.

Keating asked Moylan to bring some of his men from the North Cork Flying Column to Dublin for a group portrait. Moylan picked men from the Duhallow area of North Cork and they arrived with their weapons at the door of the Metropolitan School of Art, in Dublin, on a bright August day, in 1921.

The porter answered the loud banging on the door and when he opened it he saw men in trenchcoats standing there with rifles at their side. Moylan stepped forward and said, "We are here for Keating."

The stunned porter rushed upstairs to Keating's studio in a panicked state. He told Keating to make a run for it as there were armed men in trench coats looking for him downstairs. Keating laughed and told the porter to let them up.

The Men of the South was not an easy creation. Keating and his armed subjects had to vacate the studio midway through the painting. They relocated to the Mansion House but they were not long there when Keating had to pack up his paints and canvas and relocate to another studio.

The painting was not to Keating's satisfaction. He put the first painting to one side and decided to create another one. The first painting of Men of the South which was abandoned by Keating now hangs in Aras an Uachtarain. It was purchased during the tenure of Douglas Hyde. It includes Sean Moylan unlike the second, more familiar and famous painting.

When Keating was starting work on the second draft of the painting Moylan excluded himself from the sitting. He feared the truce was becoming too fragile and he wanted to head back to Cork to prepare for another conflict. His men on the other hand had no problem staying in Dublin to sit for the second painting!

It took Keating 11 months to finish Men of the South and it was exhibited for the first time at the Royal Hibernian Academy. In 1924 it was bought for £250 by the Gibson Bequest Committee for the Crawford Art Gallery in Cork. It still hangs there to this day, appropriately in the Rebel County!

Men of the South depicts the steely determination of the IRA Flying Column. They were young men from rural backgrounds who found themselves taking on the might of the British empire.

Jim Riordan from Kiskeam was one of those rural youngsters. In the painting, he is seen on the left with one hand resting on his weapon, the other resting on his leg. He was quartermaster of the Newmarket battalion and narrowly escaped the clutches of the enemy during a roundup in North Cork in 1921. In 1922 Riordan fought against the Free State at the Battle of Kilmallock. He was captured and imprisoned in Tin Town Internment camp until his release in Christmas 1923. He later married Sean Moylan's sister-in-law.

The central figure in the painting dressed in black with his hand resting on his hat is Roger Kiely. He was Intelligence Officer with the Millstreet Battalion, he was also a National School teacher. Kiely would later become principal of Cullen National School from the 1930s until his retirement in 1961.

Kiely made an impression on Keating who wrote in later years: "Roger Kiely was about the best and finest man I ever knew.....I went to look for him in County Cork and found him a poor school teacher in a poor little school near Kanturk...."

Danny Mullane stands on the left with both hands firmly holding his rifle. From Freemount, Mullane came from a long line of Irish freedom fighters. He grew up listening to tales of past Fenians in his family and he needed no encouragement when the call to arms came in 1920. Mullane saw action in the Clonbanin Ambush and the Rathcoole Ambush. He also fought at Abbeyfeale and recounted such events in the 1950s for the Bureau of Military History.

Dan Browne sits at the far bottom right of the painting with his rifle in hand. Browne was from Meelin and a clerical student destined for the priesthood when the War of Independence broke out. He abandoned his vocation and joined the fight for freedom, taking part in actions such as the Ballydrochane Ambush and the Millstreet Ambush. Browne was adjutant in the 6th battalion Cork No. 2 Brigade and was well known for his rifle marksmanship.

Jim Cashman stands at the back with his rifle raised. A cousin of Sean Moylan's wife, he was Lieutenant in H Company Kiskeam and saw action at the Turengarriv Glen Ambush, along with the Rathcoole and Clonbanin ambushes.

Cashman was a notable athlete. He was wounded fighting against Free State forces during the Civil War and was taken prisoner to Limerick Jail. He escaped from there in 1923 but was recaptured until his release a year later.

John Jones sits in the middle of the painting with his flat cap on. Jones was just 17 years old when he joined the IRA in Ballydesmond. He was involved in many ambushes and in 1920 was accidentally shot by a comrade who was cleaning his gun. He quickly recovered to continue the fight against the British and after that, the fight against the Free State.

Jones left Ireland after all the conflict ended and went to America. He returned to his native soil after a few decades and in the 1950s told his story to the Bureau of Military History. He began his witness statement with "I was born in Kingwilliamstown in 1902, my people were farmers." That simple statement sums those Men of the South - ordinary farmers' sons living in extraordinary times forever remembered in oil on canvas.