No green light for US tourists in Ireland

The United States excluded from Ireland's government's "green list" of the safe zone to travel to and from. 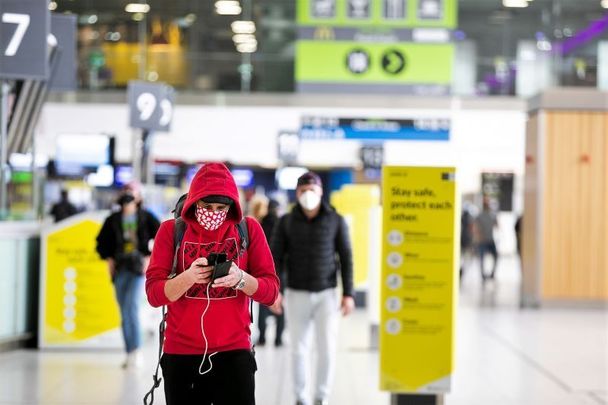 A passenger at Dublin Airport, which now has COVID guidance signs throughout. RollingNews

This week Ireland published its so-called "green list" of countries that are relatively safe for travel. It was supposed to happen on Monday, but that was postponed because Taoiseach Micheál Martin was delayed in Brussels at a critical meeting on the economic rescue plan for Europe.  The list has to be approved by the cabinet and that's not going to be done in Martin’s absence.

*Editor's Note: This article was published in the July 22 edition of the Irish Voice newspaper, sister publication to IrishCentral. The Irish government has since published its "green list," which you can read more about here.

By the time you read this, he will probably be home again and the green list may well have been announced. But I would not bet on it because there is growing unease here on the wisdom of having a list at all, given how uncertain the disease status is in various European countries. Barcelona in Spain is back on virtual lockdown, for example.

One thing that was clear at the weekend, however, was that the U.S. is not going to be on Ireland's green travel list. It's hardly a surprise given what we have seen happening there in recent weeks. But it's still disappointing since our natural expectation here is that in most things America will always be one of the best, not one of the worst.

The green list names the countries that are considered by Ireland to be relatively safe for people to travel to and from. Up to now, although our ports and airports have remained open since the pandemic began, the government position has been that all non-essential travel into and out of the country should be avoided (Confusingly, that remains the advice despite the green list, and we will come back to that.)

In the last two weeks, the situation has become increasingly frustrating for people here who want to go on their usual summer sunshine holiday in Europe. It became even more irritating as most of Europe opened up to tourists and our mailboxes were bombarded with offers of cheap flights from Ryanair. We seemed to be an outlier in wanting to keep such a tight rein on travel.

And it's not just a matter of the Irish people who want to go and soak up the sun in Europe. There are also all the tourists who might want to come here.

The tourism industry here has been demanding some relaxation before the summer slips by and their businesses are ruined.  So after putting it off as long as possible, the last government under Taoiseach Leo Varadkar agreed to produce the promised green list.

The new government under Martin has taken this on board. But after leaks last weekend we know that it is going to be a very short list indeed.

Likely to be excluded is not just the U.S. but also the U.K., the two most important sources for tourists coming here. And also unlikely to make the list are the most popular destinations for Irish tourists, France, Spain, and Portugal.

The basis for the green list is relatively simple. It's a list of countries that have the same (or a lower) number of COVID cases per 100,000 people in the population as we do.

The countries on the green list are chosen by looking at their COVID incidence rates over the previous 14 days and comparing them with ours.  The figures keep shifting, of course, so a green list will change over time. But it's the best guide there is and the only certain way of allowing some travel to get going again in a way that is relatively safe.

At the moment Ireland's incidence rate is quite low, although there have been some signs in recent days that it's starting to creep up again as we emerge from lockdown.  But in comparison with the rest of Europe, we're doing well, around mid-table.

Read more: Ireland should not do away with citizenship for Irish Diaspora

And in comparison with the U.S., the difference is stark. Figures for the last two weeks show that the incidence per 100,000 population In Ireland is less than 10 but in the U.S. it's over 100.

So who will be on the green list? By the time you read this, that may be decided and announced but it's not difficult to predict in advance.

Last week's figures from the European Centre for Disease Prevention and Control (our version of the CDC) show 11 countries in Europe that currently have lower COVID-positive rates than the 4.9 per 100,000 in Ireland. Italy, Greece, Cyprus, Malta (all of which would be destinations for Irish tourists looking for the sun), Latvia, Lithuania, Estonia, Norway, Finland, Slovakia, and Hungary (also a popular destination for the Irish) are the 11 on the potential list.

If those countries that are only slightly above us in incidence rates are included, that would bring in places like Germany, the Netherlands, and Denmark (good sources for inbound tourism here) but not France, Spain, and Portugal (by far the most popular destinations for Irish tourists).

At a stretch, the list could even include the U.K. Even though the latest figures from there are not encouraging, the cumulative number of cases per 100,000 in the U.K. since the pandemic began is still much lower than in Ireland. It all depends on what time frame is chosen.

And there will be huge pressure to include the U.K. because the reality is that stopping travel to and from there is impossible for us unless we close the border in Ireland. And that's not going to happen.

At present, anyone arriving in Ireland is required to quarantine for 14 days, and that includes Irish people coming back from holidays and foreign tourists. The only exception is people coming from Northern Ireland. That means it's possible to fly into Belfast Airport and then come down here without doing quarantine.

There are over 50 countries on the U.K.'s version of a green list which is already operating. People from these countries can land in Belfast and travel south and no one is there to stop them.

In addition, we know that many people from the North use Dublin Airport as the departure point for their sun holidays, and if they are going to one of the 50 countries on the U.K. list they can return home without quarantining.

Adding to this confusing situation is the common travel area with the U.K. which makes it even harder to monitor travel. All of this means that it would be much easier for the authorities here if the U.K. did make the green list.  But whether it would be safe is a very different matter.

There is a growing level of concern among the medical experts here that a green list is premature and even dangerous. For a start, green means go, so it's sending out a misleading message when the official advice here remains that all non-essential travel (and that certainly includes holidays) should be avoided.

That brings us to the clear contradiction between having a green list and the do not travel advice from the government based on the advice they are getting from the health experts. Despite their attempts to explain, the government is on very shaky ground.

They are now saying that the green list is simply to allow "essential travel" with some other countries without the need for a 14-day quarantine and has nothing to do with sunshine holidays. But that is not how most people are going to see it.  As we said, green will mean go.

The strength of the opposition from the health experts could yet mean that a green list will be postponed again or that it will be severely limited by restrictions to the point where it is not going to satisfy anyone. The health experts are worried that allowing travel even with countries at similar risk level does increase the danger here. It's difficult to monitor what's going on elsewhere and things can change very quickly.

Some of these experts would prefer us to follow the New Zealand model (another island) and close our ports and airports. Some travel can be allowed, they believe, but it must be accompanied by quarantining at designated locations that are strictly enforced. Anything less does not work, they say, and will jeopardize our reopening of the economy and progress towards eliminating the virus.

The problem for us is that the New Zealand approach is virtually impossible here because of the border and the common travel area with the U.K. So we have to find some middle way of dealing with the travel conundrum. Whether the government's attempt at a green list will do that remains to be seen.

Whatever happens, one thing is certain: the U.S. is off the list. People here are very aware of the evolving situation over there because it gets extensive coverage on the TV news here, on RTE, the BBC, CNN, etc.

Just how sensitive this has become here was illustrated last week by the concern over continuing flights from the U.S., with several arriving every day. Whatever about departures from New York and Boston, there was outrage that flights were coming in from Dallas because Texas is a recent COVID hotspot.

This caused so much comment here that the Minister for Foreign Affairs Simon Coveney pointed out that there were only 16 passengers on one flight from Dallas and that most of those traveling on flights from the U.S. were on business or were Irish people coming home.

But there is ongoing concern here about this. There were reports on RTE last week about one group of U.S. tourists who were refused admission to a pub and another group who had rental bike bookings canceled.

In both cases, the business owners involved were interviewed and said that the Americans had admitted they had not quarantined. It got to the stage where there was an appeal that people should stop jumping to the conclusion that everyone with an American accent here has to be a tourist.