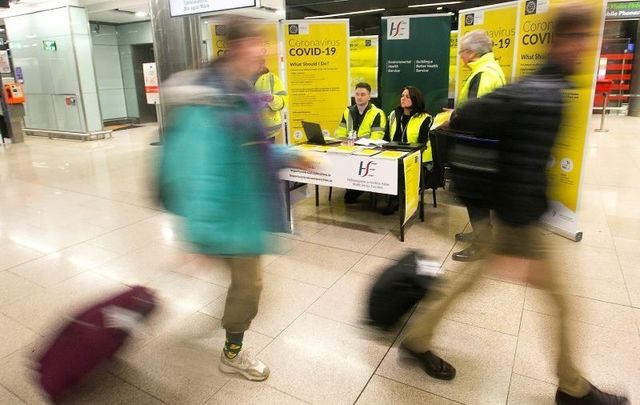 Self-isolation will not be required for passengers arriving into Ireland from the 15 'green list' countries. RollingNews.ie

The Irish government has published its "green list," but the official advice remains to avoid non-essential travel abroad.

The Irish government has published its "green list" of 15 European countries that have similar or lower incidences of COVID-19 than Ireland. Passengers traveling to Ireland from these 15 countries will not be made to restrict their movements upon arrival.

The green list, which will be reviewed every two weeks, was decided upon during a Cabinet meeting late in the day on Tuesday, July 21.

While the travel advisory for the15 countries on the list has been changed to ‘normal precautions’ (“green”) rating, the official advice for people in Ireland remains to avoid all non-essential travel abroad.

The United States, the worst-hit country in the world in terms of coronavirus, is not included on Ireland’s green list. However, travel from the US to Ireland is still permitted, but arriving passengers will have to fill out Passenger Locator Forms and self-isolate for 14 days. Only American citizens and legal residents, with some exceptions, are permitted to enter the US from abroad at present.

A statement from the Irish government published on July 22 said: “Following a meeting of the Cabinet this evening, the Government has agreed that the following locations be included as Normal Precautions on the Department of Foreign Affairs Travel Advice:

“The list will be reviewed on a fortnightly basis, based on advice from officials including public health experts.

“There is no change to the current policy in respect of travel from Northern Ireland.

“The Government will continue with plans to strengthen the existing measures for monitoring passengers who arrive into Ireland, including the introduction of an Electronic Passenger Locator Form, enhanced follow-up procedures, a call centre operated by the DAA, and a proposed testing regime for symptomatic passengers at airports and ports.

“Processes to restrict flight or passenger travel in certain circumstances will also be explored.

“In conjunction with these preventative measures, there will be a renewed communications campaign across all platforms to ensure maximum public awareness of the latest advice.

“The Pandemic is not over and the public health advice remains the same. The safest thing to do is not to travel.”

On Wednesday, Ireland's Minister for Foreign Affairs Simon Coveney told The Independent that the green list was determined by the "benchmark" criteria, presented by the European Center for Disease Control, of each country's number of positive tests for COVID-19 per 100,000 people over the past 14 days.

Coveney said: “We’re using that essentially as the test of risk level in different countries, and we‘ve used Ireland as the starting point. Any country that represents less of a risk than Ireland on the basis of that criteria is on the so-called green list, any other country is not."

“If you go to one of these countries on the green list, when you come back again, you are not required to restrict your movement for 14 days. For any other country, you are."

Coveney reiterated that the "safest course of action" is to holiday at home in Ireland, but acknowledged that the Irish government has an "obligation" to provide "accurate information" to those who want to travel abroad. He noted that anyone traveling abroad should inform themselves about their destination country and its coronavirus protocols.

Coveney said that it’s a “possibility” that travelers may be required to be tested for COVID-19 in their home country before traveling to Ireland. He said the government has asked the Department of Transport to explore “international best practice."

Coveney added: "What we are doing in the meantime, is putting in place random testing capacity in our airports, putting in place testing facilities who may be showing symptoms while they are in the airport.

"What I would like us to be able to do is to move to a point in time where people want to come to Ireland, but want to avoid restrictions. Where they may be able to get tested in a credible way 48 hours before coming and effectively have a certification that shows that they have tested negative before coming to Ireland. I certainly think that would be very helpful to put a system like that in place."