Indoor dining in Ireland is set to finally reopen sometime next week, pending the passage of new legislation. 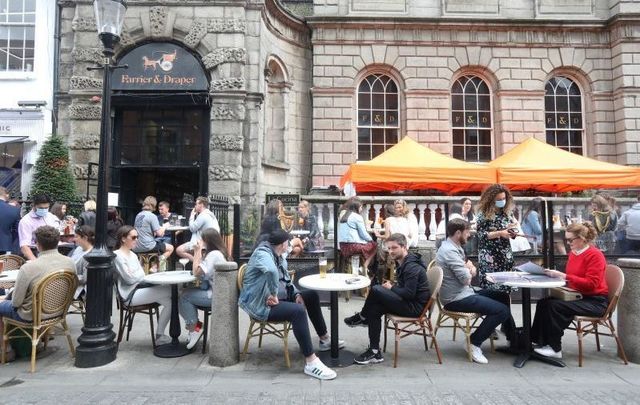 More than two million people who are fully vaccinated against Covid are set to be able to drink and dine indoors in Ireland.

It will be the first time thousands of pubs will open after more than 16 months. Last summer, some pubs serving food were allowed to reopen alongside restaurants with a rule that a customer had to have a “substantial meal” to go with their pint, but many so-called “wet” pubs never reopened during the pandemic.

All hospitality sectors closed at the end of last December and restaurants only reopened for outdoor meals in late May.

Finally, after pressure from the industry, indoor eating and drinking is due to return within a matter of days.

The Dublin coalition government has yet to set a reopening date, but it said it will not be later than July 26. Many in the industry hope they can reopen by July 23 – that’s Friday of next week – after covering legislation has passed through the Dail and Senate and is signed by President Michael D. Higgins.

Jubilant pub owners and restaurant proprietors, frustrated when the anticipated July 5 reopening date was deferred, welcomed Tanaiste Leo Varadkar’s assurance there will be no “excessive enforcement” of the new system, with gardai standing back from ensuring only vaccinated or immune people will dine indoors.

Instead, there will be spot checks by Health and Safety Authority officials and the public will be mostly trusted to comply with the new regulations.

However, there is political opposition to the reopening of the hospitality sector. People Before Profit TD Paul Murphy described the reopening as a mistake that risks hundreds of unnecessary deaths.

He told RTE on Tuesday, “It’s a reckless mistake that’s being made, yet again, after many, many reckless mistakes made at the behest of private business lobbying and ignoring public health.”

Murphy said the move will endanger the health of hospitality workers, the majority of whom will not be vaccinated, and risks a fourth wave of Covid-19 in the country.

The Cabinet decision on Monday night will allow fully vaccinated people to dine indoors, with unvaccinated staff also allowed to eat or drink in their place of employment.

The new measures for indoor hospitality will operate until October 9, but can be extended under plans approved by ministers.

Hotels, which have for a number of weeks been allowed to serve only resident guests indoors, will also be able to cater for non-residents under the new plans.

The government’s new Digital Covid Certificates (DCC), which Ireland and other EU countries are implementing, can be used by members of the public as evidence of being fully vaccinated.

Children under the age of 18 who are accompanied by a vaccinated or recovered adult guardian can also be admitted for indoor services.

Tourism Minister Catherine Martin said offenders could be fined up to €2,500 or serve a month in jail if they forge a document that they were vaccinated or immune.  Pubs that do not comply could be forced to close and also be liable for a fine.

The Restaurants Association of Ireland said reopening for indoor eating was “a giant leap towards reopening hospitality businesses safely, viably and sustainably.”

Taoiseach Micheál Martin said compliance with new rules around indoor dining is something that public will have to “buy into.” He said concerns remain about the Delta variant of Covid.

He added, “We want to get the balance right between managing to suppress the virus, and getting jobs in the economy going again.”