WATCH: Co Kerry's restaurateur's '"divine inspiration" to get back to indoor dining

Paul Treyvaud has discovered a loophole in Ireland's prohibition of indoor dining - he is now ordained in order to host weddings indoors at his restaurant in Killarney, Co Kerry. 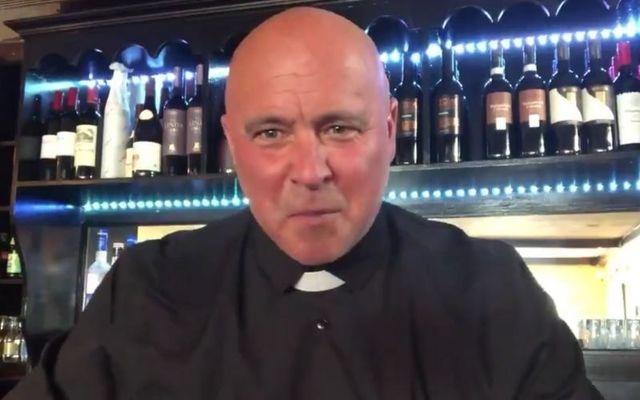 Paul Treyvaud, the owner of Treyvaud's Restaurant in Killarney, Co Kerry, has found an "inspired" way to bring customers back indoors.

Treyvaud initially planned to defy Irish health regulations and re-open his restaurant for indoor dining on July 5 but backed down after he was warned that both he and his customers would be made an example of and fined heavily.

After some "divine inspiration," however, Treyvaud announced his new plan in a video on social media on July 5.

"I've gone through all the statutory instruments and legislation," Treyvaud says in his video, "and in nowhere does it say that if you were married throughout the pandemic and didn't get a chance to celebrate, that you must celebrate on the day you get married.

"So anybody's who's been married within this pandemic in the last 16 months or so is more than welcome to come into restaurants.

On June 29, the Irish government confirmed that the reutnr to indoor hospitality would be delayed from July 5 with a potential return on July 19. However, "as an exception, weddings already planned will be permitted to proceed on the basis of the expected changes, with 50 guests permitted to attend wedding receptions with protective measures."

After quickly explaining how we would cater to newlyweds, Treyvaud continued: "Hang on a second - there must be a little bit more we can do.

"Guess what! I've gone one step further, that's right. I'd like to introduce you to Minister Paul Treyvaud from the Christian Global Outreach Ministries."

He concluded his post by saying: "By the powers invested in me, I'd like to pronounce Treyvaud's Restaurant open, indoors."

Was asked to post earlier than 1pm in case it helped some businesses sooner rather than later.

Every single bar and restaurant in Ireland can use this and it might just save a few of us.

The last part of the vid is up to you!

In a subsequent post, Treyvaud clarified: "Like I said yesterday, it’s a pity some people only read the headline and not the whole story. I’m certainly no bottler. They can call me whatever they want, but all I’ve tried to do is highlight the insane situation this government has put almost 200k people in.

"You can eat and drink in a packed hotel but not in a controlled bar or restaurant. And for what it’s worth, I’m delighted for every packed hotel.

"You can do it five minutes across the border but not five minutes the other side and in two weeks' time, you can board a packed plane, go anywhere in Europe, eat indoors there only to fly home and not be allowed to do it here. It is absolutely insane how we’ve been treated.

"The day everyone in my industry was called nonessential was the day I knew they simply didn’t care about us.

"I’ve done as much as I can. I don’t care if people think I was doing it for personal attention as I know most people know what my intentions were. It doesn’t bother me in the slightest the negative comments as thankfully they are few and far between. They are also the same people that told me back in February that it was a huge publicity stunt as we’d be open well before July 1st anyway.

"The support I’ve gotten over the last six months has been huge and I am so grateful. So many people backed The Plan and it is now blatantly obvious everything I said would happen HAS happened. We just needed more people on board for it to have worked.

Certainly no bottler and definitely didn’t back down. The only cert I’ll ask for is a marriage one!!

And I can sort it out if you’re stuck😜 pic.twitter.com/GzHOVu3q0y