The daring IRA raid on Fastnet Lighthouse, 100 years ago this month 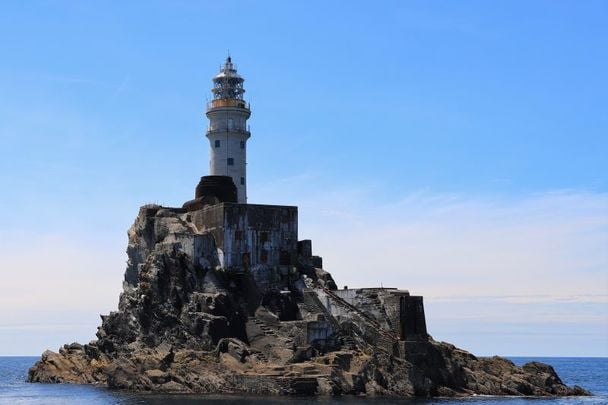 During the mid-summer of 1920, the West Cork IRA led a daring raid on Fastnet Lighthouse. The British authorities used to store ammunition and more at the famous West Cork landmark because they thought it was a safe place.

The Fastnet Lighthouse sits on a dangerous stretch of water and remains to this day a hard place to get to but, that did not stop the hardy few of the West Cork Brigade from going there on the night of June 28th, 1920 to liberate the lighthouse of its arms!

Captain Richard Collins of the Goleen Company came up with the idea of raiding the lighthouse. He had been a keeper there from 1912 to 1918 and provided the local IRA battalion with information about the inner workings of Fastnet. He was unable to take part in the raid because he was arrested just before it happend!

Sean Lehane and John Regan of the Schull Battalion led a raiding party of 12 to Fastnet Lighthouse onboard a fishing boat called The Maire Cait. They waited until the British Naval patrol ship HMS Truro sailed by on its nightly patrol and once it was out of sight they set off for Fastnet.

It was around midnight when the IRA Volunteers onboard The Maire Cait made their approach to the Fastnet Lighthouse. The notorious stretch of water played up to its deadly reputation and waves of up to eight feet crashed against the Fastnet Rock.

Regan tied a rope around his waist and jumped from the boat to the side of the rock. He tied the rope to an iron ring and pulled the boat in. The rest of the IRA Volunteers got off the boat and they made their way up the steep steps leading to the lighthouse. When they reached their target they were surprised to find the large steel door was unlocked and so, they simply let themselves in!

The 12 IRA Volunteers ran up the spiral staircase where they met the lighthouse keeper who gave no resistance. They found materials for bomb-making and quickly gathered them up. Using the lighthouse derrick they loaded three boxes of detonators and primers onto The Maire Cait along with 17 boxes of gun cotton.

Before leaving the lighthouse they dismantled the wireless. The raid on Fastnet Lighthouse was carried out in just under 1 hour.

The Maire Cait was met by IRA Volunteers from the Leamcon Company on a beach at Long Island Bay. They unloaded the boxes and stored them under large heaps of seaweed.

The following day, the area was flooded by British troops. They searched for the items taken from Fastnet Lighthouse but, they failed to detect them hidden under the seaweed on the beach! Once the threat was gone the IRA Volunteers retrieved their stashed items from the beach and distributed them to units across the Rebel County.