A history of the Great Hunger ballad "Skibbereen"

A brief look at the history behind one of Ireland's most haunting ballads that emerged from the Great Famine. 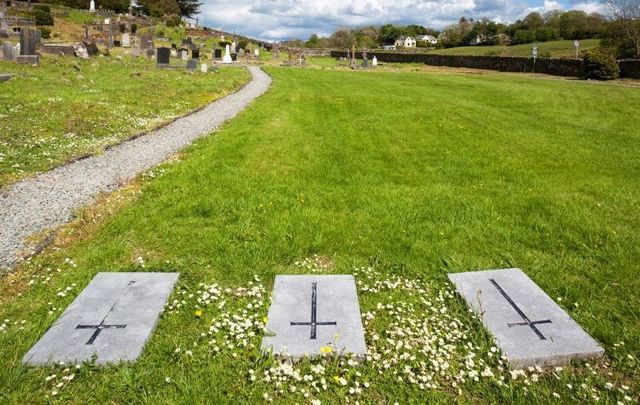 Skibbereen, Co Cork: Abbeystrowry Cemetery and the memorial to the 10,000 dead during the Irish Famine, 1845-1850 Getty Images

175 years ago, in September 1845, the first reports of potato blight in Ireland were recorded. It was the beginning of An Gorta Mor - the catastrophic famine.

Mass graves such as the one in Abbeystrewry in Skibbereen, West Cork overflowed with victims of hunger and disease. Those bleak years left physical and mental scars on Ireland, most notably in West Cork where the haunting ballad of "Skibbereen" emerged as an anthem of those dark times.

The ballad plays out as a dialogue between a father and son. The older man speaks of bitterness when asked by his son why he left his home in West Cork. By the end of the ballad the son vows revenge for Skibbereen.

Read more: Carrickfergus - the real truth about the lyrics to one of Ireland’s most haunting ballads

The ballad is known by a number of titles - "Dear Old Skibbereen" or "Farewell to Skibbereen" or just "Skibbereen." It can be performed in a rebel-rousing fashion or as a slow lament but, no matter the title or style of performance the content does not change, it tells the tale of oppression and loss.

The ballad came from the pen of Skibbereen native Patrick Carpenter. Unfortunately not much is known about this man except that he left West Cork on a coffin ship to America. He was known to contribute poems to The Boston Pilot newspaper and the Fenian newspaper The Irish World.

"Skibbereen" was first published in Boston by Patrick Donohue in 1869 as part of a book of collected songs called "The Wearing of the Green Songbook." In the publication, Donohue attributes "Skibbereen" to Patrick Carpenter of Cork.

"Skibbereen" next appeared on a broadside ballad sheet in Glasgow in 1875 but it states that the author is unknown. It seems as though the ballad had an author in America but by the time it travelled across the Atlantic Ocean to Scotland, its authorship had been lost!

Read more: The amazing origins of “Whiskey in the Jar” one of the best-loved Irish ballads

In 1889, English composer May Ostlere appropriated the ballad. In The Illustrated Sporting and Dramatic News of June 15 1889, a report states: "On Friday next, Charles Collette will perform Miss May Ostleres new song Skibbereen." It is unfortunate that the authorship of the anti-imperialist ballad was lost when it crossed the ocean from America but it is another thing entirely when the upper echelons of imperial British society claim it!

The ballad of Skibbereen first appeared in Ireland in 1915 as part of a songbook collection published by Belfast man Herbert Hughes. In 1938, famed American folklorist John Lomax recorded Irish immigrants singing it in Michigan. The ballad was also recorded by The Wolfe Tones and The Dubliners, among many others.

The ballad continues to be a popular one sung across Ireland and beyond while it's haunting sentiment can be felt in the graveyard at Abbeystrewry which holds the bones of those who vow revenge for Skibbereen.

You can listen to Skibbereen as performed by The Dubliners here:

Read more: Who are Celtic Thunder and what are their best songs?