Being a laughingstock during a time of international crisis is not something any sane leader would ever aspire to. 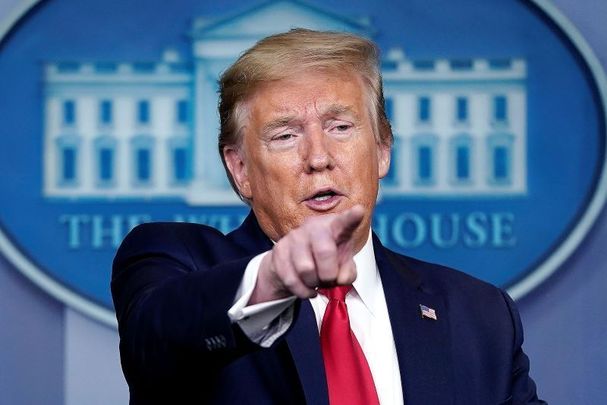 President Donald Trump during one of his now world-famous COVID-19 press briefing. Getty

Being a laughingstock during a time of international crisis, when a killer virus is sweeping the globe and causing intense damage, is not something any sane leader would ever aspire to.

What the world so desperately needs now is calm, focused, and disciplined leadership.  We need leaders who can clearly communicate facts based on science and data, tell us what we need to know and what we must do to escape the clutches of COVID-19.

What we definitely don’t need is the leader of the free world casually playing doctor and pushing preposterous coronavirus remedies – disinfectant!!! – staging daily fights with the media, and openly disagreeing with medical experts who have spent their lives saving lives.

But President Donald Trump’s MO, even during a pandemic, is crystal-clear: he’ll do ANYTHING for another four years in the White House.

It’s all about him.  It’s never about us – the farmers, the vets, the bikers and the military members who he claims to love so much but couldn’t have cared less about when he was wheeling and dealing back in the day in blue state New York, clubbing at Studio 54 and palling around with the Clintons and other Democrats.

Read more: Imbleach him! Tide’s going out for Donald Trump

We Americans have had to endure a whole bunch of crazy since Trump took office in 2017.   But honestly, during the past few days, the escalation of insanity emanating from his mouth and his fingertips is indicative of a dire problem that’s broken through a very thin surface, to begin with.

President Trump is always ragging on Sleepy Joe Biden.  But for now, we’re stuck with Demented Donald.  Heaven help us.

We’re not going to pretend to be a physician or scientist like he does.  But the president has clearly flipped his lid, and it’s fair to wonder what the heck is going on in that stable genius brain of his.

Has the pressure of dealing with a global pandemic that he once insisted would just “disappear” finally gotten to him?  No doubt, but all of us are feeling stress and strain, and economic pain that he’ll never have to contemplate.  However, our stress levels haven’t prompted us to chug a bottle of Lysol for a quick body cleanse, or douse ourselves with massive doses of sunlight.

Does Trump have a drug or alcohol issue that’s prompting him to act out so recklessly, as he did on Sunday afternoon when he went on a bumbling Twitter rant against the media, misspelling words like Nobel (Noble) and hamburger (hamberger), and sounding like a drunk uncle at Thanksgiving in the process?

Though it appears he could have been soused on Sunday – it was, after all, his beloved Melania’s 50th birthday – Trump’s history of being anti-booze and anti-drug is extensive.  His elder brother Fred died of alcoholism, and the president has often said that he would never experience the same fate.  So let’s rule out that he had one too many shots of Proper No. Twelve, the Irish whiskey founded by one of his biggest fans, UFC star Conor McGregor.

Could our president be bipolar?  Or have some sort of borderline personality disorder?  As many have opined in the past, a mental problem is almost certainly in play here.

Which would be fine, ordinarily, when the patient accepts the diagnosis, receives treatment and sticks to behavioral therapy assignments.  But Trump is anything but the model patient.  And, unfortunately, we are all paying the price.

There is no other explanation for his uncontrollable, utterly unhinged outbursts of late.  Who in their right frame of mind would recommend that household poisons could be the cure for COVID-19?

If the president is a real leader, he’d sip some Clorox and tell us how that worked out for him, or maybe have son-in-law Jared – so instrumental in securing Middle East peace and all his other endeavors -- be a test case so we could have a little peace of mind before swallowing.

We’re not trying to be divisive during these scary times, and not trying to inflame the president’s massive fan base – make no mistake, come November he’ll be a tough customer at the ballot box, especially as his Democratic opponent, Vice President Joe Biden, is having his own problems sounding coherent.

But President Trump’s behavior during this pandemic has for the most part been abysmal.  And he’s surrounded by a bunch of rear-end kissers – Vice President Mike Pence, anyone? – who can’t, or won’t, tell him that his buffoonery is way off the mark when our country, and indeed the world, is crying out for real leadership.