Paradise Square is set in 1863 Manhattan, as Irish Famine immigrants were streaming into a New York City in the grip of intense racial conflict as a result of centuries of slavery and the U.S. Civil War. 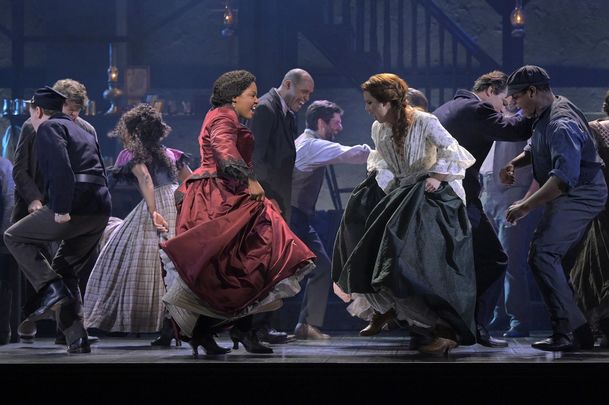 Say what you will about The Vatican, but it’s been around for a long time.  You can say its leaders don’t do much that is right. But you have to admit they do plenty that’s effective.

Consider when they take up a case for sainthood. One official is always given the coolest job and name ever – “advocatus diaboli.”

Basically, a “devil’s advocate.”  This person’s job is simply to make the strongest case possible against whatever argument happens to be on the floor at any given moment.

We could all use a whole lot more advocatus diabol-ing in our very opinionated lives these days.

I was thinking about this reading the reviews of the new Broadway musical Paradise Square, written by Black 47 frontman and overall Renaissance Hibernian Larry Kirwan.

Some of the reviews have been very good.  Charles Isherwood in The Wall Street Journal said as the show “reaches its climax, Joaquina Kalukango steps toward the front of the stage” and unleashes the “rousing anthem ‘Let It Burn,’” which “Ms. Kalukango delivers with a dramatic intensity and soaring vocalism that galvanizes the audience, and the show. It’s the kind of moment that sends electricity up and down your spine.”

Paradise Square is set in 1863 Manhattan, as Irish Famine immigrants were streaming into a New York City in the grip of intense racial conflict as a result of centuries of slavery and the U.S. Civil War.

Most infamously, there were the gruesome New York City Drafts Riots when white workers and immigrants, angry about fighting in a war they felt disconnected from, destroyed the property of the more affluent, while at the same time torturing African Americans.

Paradise Square attempts to uncover pockets of humanity amidst this terror, a few poor desperate folks who tried not to hate each other.

This is where the producers probably should have employed some kind of devil’s advocate.

Someone needed to look this show over and say, “Perhaps no one these days wants to hear a story rooted in…what’s that word again?”

“It’s true,” Jesse Green begrudgingly admits in The New York Times, “that in the impoverished, piano-shaped district of downtown Manhattan called Five Points, some black and Irish neighbors who had been living together in relative harmony joined forces to resist the mobs.”

As Green wrote, “In hammering these large-scale events into individual stories…racism becomes an individual character flaw instead of a systemic evil; resistance, the solitary moral genius of a hero.”

And, of course, people who go to see musicals expect to see a far more intricate analysis of socio-economic matters, right?

This is not to suggest there is some obviously more enlightened audience for Paradise Square out there. Because there is another faction – let’s call them “Donald’s advocates” – who might look at the singers and dancers in Paradise Square and see the ancestors of communism and woke ideology and race traiting. And some of those Irish immigrants on stage look awful gender-fluid, so they must have been successfully groomed by predators back in grade school.

A devil’s advocate might have pointed all of this out.

Obviously, America needs to face up to the ugliest aspects of its past.  For a long time, certain folks fought that because it was seen as somehow unpatriotic.

It should be just as obvious, though, that only looking at the most terrible aspects of the past is only marginally better.

Well, okay.  That’s certainly one way to look at things.