April 3rd was a momentous moment in the theatre history of New York - the musical “Paradise Square” opened. 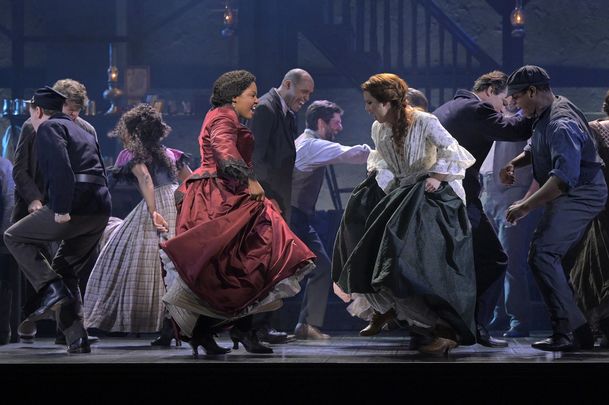 The Paradise Square of the title is a saloon and a brothel. It is owned by a Black woman named Nelly O’Brien (the spectacularly talented Joaquina Kalukango) and her Irish husband Willie (Matt Bogart, last seen as James Joyce in Jonathan Brielle’s “Himself and Nora”). It is located in the Five Points district of Manhattan, where Black people and immigrant Irish coexist and mingle seamlessly.

And the irony is delicious.

Today, the area around Paradise Square is called Foley Square, home to the Federal Courthouse and the New York State Supreme Court.

One hundred and sixty years ago it was called the Five Points. It was disgusting, very disgusting. It contained immigrants, most of them Irish escaping the Famine, and a lot of Black people, some of them escaped slaves. Their playground in the Five Points consisted of booze, whoring, drugs, gambling and all the things that today, in the United States of America, are mostly legal for plain, upstanding Americans. But back in the day, at the Five Points, it was sin—sin to the fine Protestants in charge. It was so sinful—and colorful—that Hollywood loved it. Many TV series were produced and, of course, the film “Gangs of New York,” starring Leonardo DiCaprio and Liam Neeson, became a fan favorite. Sin has come a long way.

Larry Kirwan takes us back to his Five Points

Larry Kirwan, famous for leading Irish rock band Black 47, has brought back to life the Four Points of 1863 in “Paradise Square.”

There are a lot of people responsible for this musical—there are over thirty producers, including Garth Drabinsky, known for, among other things, producing Tony-winning musicals, including “Ragtime,” “Kiss of the Spider Woman” and a revival of “Show Boat”—but Kirwan is front and center. He is one of the authors of the play’s book. The whole idea was conceived by Kirwan, and additional music, inspired in part by the songs of Stephen Foster, were also contributed by Kirwan. In fact, the whole play evolved out of Kirwan’s play about the subject, “Hard Times.”

The O’Briens are not the only interracial couple hanging around Paradise Square. There is Irish immigrant Annie Lewis (Chilina Kennedy) and her Black husband, the Reverend Samuel Jacob Lewis (Nathaniel Stampley), a man of God and commerce.

Things are swell in early 1863 and everyone is proud of Willie O’Brien and “Lucky” Mike Quinlan (Kevin Dennis), who are in the Union army and proud to fight for the Republic.

Then things begin to change. Annie’s nephew Owen Duignan (A.J. Shively) arrives from Ireland and Washington Henry (Sidney DuPont), an escaped slave wanted for murdering his master who raped his wife, arrive from the south. Owen and Washington are spectacular dueling dancers, easily outdoing each other as they compete not only against each other, but against each other’s race. The first sign of conflict has arrived and it does not bode well for either Paradise Square or the Five Points.

The draft and riot

In 1863 President Lincoln introduced the federal draft. It had many flaws. First, you could buy your way out of it for $300 or by getting someone to take your place. Also, Black people were exempt because they were considered chattel, not people. What this all means is that immigrant Owen Duignan is available for conscription, but Washington Henry, escaped slave, is not eligible. The schism between the Irish and the Black people has begun.

The war takes its toll. Willie O’Brien is killed and “Lucky” Mike Quinlan returns from battle maimed, less an arm. Lucky asks the Reverend Lewis for a job but that job has gone to a Black man. Resentment between Irish and Blacks begins to foment with Lucky Mike urging his fellow countrymen on.

In steps local politician Frederic Tiggens (John Dossett) to stir what by now has become a rancid stew. Tiggens, a perfect soulless villain, manipulates Lucky Mike to rile up the Irish. Tiggens is obsessed with capturing Washington Henry and will stop at nothing to apprehend his man. Tiggens achieves each of his goals as Washington is caught and the riot tears the city to shreds.

After the riot there are lamentations on both sides and a kind of rapprochement between the two groups. Crippled Lucky Mike still needs a job and asks Tiggens for help. Tiggens says that he’d love to help, but he can’t very well hire a man who helped instigate a riot! Politicians always manipulate—and their hapless stooges never figure it out. P.T. Barnum understood this phenomenon better than anyone.

Still, the irony and hypocrisy are delicious.

The play is rich in song (Joaquina Kalukango’s rendition of “Someone to Love” is especially inspirational) and the dancing, especially by A.J. Shivey and Sidney DuPont, is invigorating and joyful, easily rivaling anything that “Riverdance” has to offer.

As much as “Paradise Square” is entertaining and exhilarating, it is also disturbing. Leaving the theatre there is a feeling of fatigue in the knowledge that we haven’t made much progress in almost 160 years. In 1863 it was the Civil War riots. In 2021 it was the Capitol riot, both of which were based on perceived faults of one ethnic group or sect against another. Have we made any progress at all or are we stuck in a perpetual, permanent moral malaise that is unshakable?  “Paradise Square” searches for a solution…as does the rest of America.

“Paradise Square” is playing at the Ethel Barrymore Theatre.

* Dermot McEvoy is the author of the recently published Real Irish New York: A Rogue’s Gallery of Fenians, Tough Women, Holy Men, Blasphemers, Jesters, and  a Gang of Other Colorful Characters. He is also the author of The 13th Apostle: A Novel of Michael Collins and the Irish Uprising and Our Lady of Greenwich Village, both now available in paperback, Kindle and Audio from Skyhorse Publishing. He may be reached at dermotmcevoy50@gmail.com. Follow him at www.dermotmcevoy.com. Follow The 13th Apostle on Facebook here.