Through all of Ireland's hardships and battles, Irish women have been front and center. 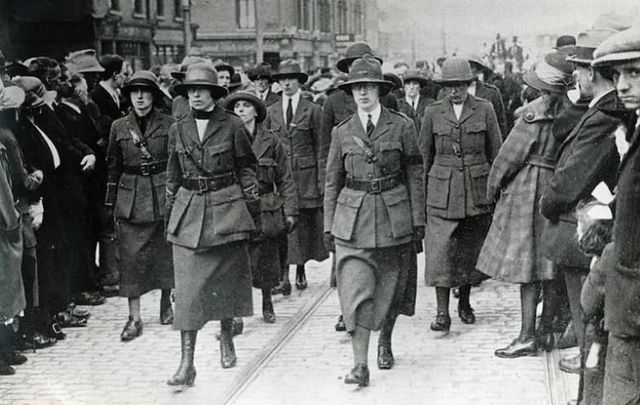 It’s March! Usually, this is one of my favorite and busiest months of the year.

Normally I would drive my kids to a multitude of Irish Dance performances and parades. There would Irish music, parties, family, and plenty of craic.

However, we are still in the midst of a global pandemic. Around the world, St. Patrick’s Day will be quieter. There are still many things to celebrate in March. It is both Irish American Heritage Month and Women’s History Month. There are so many women who have contributed to both Irish-American History and Irish History.

Irish history is filled with triumph and tragedy. In all the hardship and battles, Irish women have been front and center. During the Famine, Irish women used every resource available. When their husbands could no longer work or worse, women took overworking the same jobs that were killing their husbands. They did whatever they could to put a little food in the family’s stomach. This often meant starving themselves.

I recently read Rebel Sisters by Marita Conlon-McKenna. It is a great novel about the famous Grace Gifford and two of her sisters. I have always loved the story of Grace and her marriage to Joe Plunkett inside Kilmainham Gaol. The book discussed the Gifford sisters’ various roles during the 1916 Easter Rising. I found myself compelled to look more at the role of women in the struggle for Irish Freedom.

The early 20th century saw women emerging from their roles as wives and caregivers, and becoming involved in a large array of social issues including women’s education, women in the trade unions, and of course the women’s suffrage movement. Many also became involved in the Irish Nationalist Movement.

Cumann na mBan is an Irish republican women’s paramilitary organization, whose constitution made explicit references to the use of force by arms. The organization’s primary objectives were to advance the cause of Irish liberty and to organize Irishwomen in the furtherance of this objective, to assist in arming and equipping the Irish men for the defense of Ireland, and to form a fund for these purposes. They called it ‘The Defense of Ireland Fund’. Branches dedicated to the Cumann na mBan’s constitution quickly formed across Ireland.

The women who made up C n mB (short for Cumann na mBan) came from diverse backgrounds. While most members were white-collar workers and professional women, a considerable amount of recruits were working-class women. Over time, some members split off to join other Associations, but the ladies of the Cumann na mBan were not deterred.

In April 1916, C n mB integrated into the Army of the Irish Republic under the leadership of Pádraic Pearse and James Connolly. By nightfall on the day of the Rising, women insurgents from the C n mB had established themselves in all but two major rebel strongholds throughout Dublin.

Throughout the Easter Rising, women played many pivotal roles, although their roles are unfortunately largely forgotten. A majority of women worked as Red Cross workers, couriers, or secured rations for the men. Other women gathered intelligence on scouting missions, carried messages, and carried explosives and arms from one stronghold to another. In the chaos, it was easy for the women to navigate Dublin inconspicuously.

Some Cumann na mBan members also belonged to the Citizens Army, which led to them being combatants in the rising. They loaded weapons, and many were snipers. Even upon surrender, the woman had important roles. They organized the evacuation of buildings and destroyed incriminating documents. C n mB member Elizabeth O’Farrell acted as an intermediary between the two sides. Under escort by the British Military, she delivered Pearse’s surrender order to garrisons still fighting around Dublin. No women rebels were killed but a gunshot badly wound sniper Margaret Skinnider.

Elizabeth O'Farrell, who died on this date (25 June 1957) was an Irish nurse, republican, member of Cumann na mBan

She is also known for delivering the surrender in the 1916 Easter Rising and is visible in the well-known photo with Pearse taken at that time@nlireland #DeOldify pic.twitter.com/ZJaSbX6tmJ

When the Rising was over, seventy-seven women from the Cumann na mBan found themselves imprisoned in Kilmainham Gaol. They released most women within a few weeks because British authorities had little desire to intern a large cohort of women. One woman Constance Markievicz who claimed to have killed a police constable was sentenced to death. They later released her on amnesty in 1917.

The Rising had ended, but for the women of the Cumann na mBan there was still work to be done. Members continued to fight for Irish freedom and women’s rights. They took a leading role in keeping the memory of the 1916 leaders alive. The women organized prison relief and canvassed for Sinn Féin in the 1918 general election, in which Countess Markiewicz was elected Teachta Dála.

During the Anglo-Irish War, members hid weapons and provided safe houses for volunteers. In 1923, the government of the Irish Free State banned the organization and opened Kilmainham Gaol for women prisoners. Women’s involvement in the rising led to them taking bigger roles in Irish politics and the continued fight for a United Ireland. The boldness of the C n mB set the stage for women throughout Ireland. They no longer stood back while the men fought. They opened doors for women like politician Bernadette Devlin-McAliskey or more militant women like IRA member Mairéad Farrell. Whether they were members of Cumann na mBan, the IRA, or politicians, these women molded Ireland into what it is today.

The organization stayed active during the Troubles and through the present day. Today they are a proscribed organization in the United Kingdom under the Terrorism Act 2000 but are not currently listed as a Foreign Terrorist Organization in America.

Regardless if you agree with their tactics or not, the women of the Cumann na mBan were pivotal in securing Irish freedom. In a time where women were finding their voices, yet still took a back seat to men, they proved themselves to be worthy counterparts. Women fought alongside men. Their involvement was a fundamental reason the rebellion was truly revolutionary. These women were not only rebelling against British rule, they were also rebelling against the norms of women’s place in society.

It is reasonable to believe that without their support the leaders of the 1916 Easter Rising may have needed to surrender sooner. Like many women around the world, these Irish freedom fighters could no longer wait for the government to do what was right. They knew they had to help bring about the change they wanted. Their means might not have been the best, but at the time they believed they were necessary.

One of the most important lessons to learn from the ladies of the Cumann na mBan is that women are capable of anything we set our minds to, even if it seems impossible.