COVID and Brexit - a Christmas like no other for Ireland

There will be empty seats at the dinner table this year. 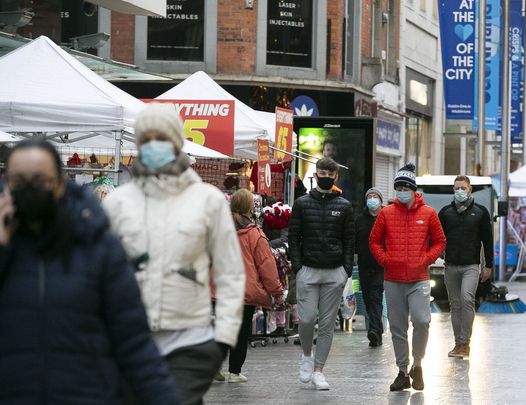 Christmas is a special time in Ireland.  It's special everywhere, of course, not least in America, but it has always had an extra resonance and significance here in the old country.

There are reasons for that.  With our history of emigration, the pull of family ties and the longing for home at Christmas time are more powerful here than in most other places.

There's the nostalgia for childhood haunts, whether it's country roads or city streets.  There are the few pints with old pals in the favorite pub, the meeting and greeting and catching up with old friends.

There's midnight Mass, a tradition even for those who don't see the inside of a church for the rest of the year.  And there's the turkey and ham on the day, the special bottle of red, the plum pudding, and the Irish coffees to keep you awake before the walk down the town, out the bog, or up the mountain before it gets dark.

That's what it's like in a normal year.  But it's not normal this year, of course.

It's been a strange year here, just like everywhere else.  And it's going to be a strange Christmas in Ireland, a Christmas like no other we have ever seen.

Our recent six-week Level Five lockdown which ended three weeks ago was aimed at allowing us to have a Christmas as normal as possible in spite of Covid.  And to a degree it worked.

Cases fell to below 200 a day.  We were able to go back to the less restrictive Level Three, with all shops, bars that serve food, and restaurants open again, and travel around the country allowed instead of having to stay in your own county.

With Christmas on the way, this was relaxed further from last Friday, with three households (your own and two others) now allowed to mix for family gatherings, making the Christmas dinner for extended family possible.

All seemed to be well early last week.  But in the last few days concern has grown about the fallout from the lower restrictions and the increasing Christmas activity.  Last week the daily case numbers were still down in the 200s but in the last few days they have climbed again to the 500s and at the weekend to the 700s.

The result -- even before the frightening news about the new Covid variant in the U.K. -- set alarm bells off here.  Our health experts and the government redoubled warnings, asking people to be extra careful and to limit contacts over the holiday, to maintain mask-wearing and social distancing, to open windows and wash hands regularly, to spread out settings at the Christmas dinner table.

Even if all that is followed, the authorities are now very worried about what may happen as people get together.  The expectation is that when Christmas is over the numbers will shoot up and a full lockdown will be back.

Restaurants and bars that serve food are likely to be closed again, possibly from December 28.  Non-essential shops will probably be closed a week or so later, allowing them to have the January sales before being shut.  Travel will be severely limited again.

Most people don't need warnings from the authorities.  There is a growing feeling here that the worst of the Covid crisis is still ahead of us, despite the vaccines that are on the way.

The new fast-spreading strain of the virus that is now rampant in London and the south of England has changed everything.  Many people here have already decided to limit their contacts, including the number of family members they see over Christmas.  It's just not worth it, they say, a phrase one hears all the time now.

In the U.K. the situation is so bad that Prime Minister Boris Johnson has come close to canceling Christmas altogether.  Instead of the five-day relaxation for the holiday that had been planned there, it will now be just one day -- Christmas Day itself -- and in London and much of England there will be no mixing between households.

Shops and bars are being closed.  People are being told not to travel, to stay at home.  It's close to a total lockdown.

In Northern Ireland, the rate of new Covid cases and deaths is double what it is here, yet there is no restriction on movement across the border.  That does not make sense, particularly since travel here from the rest of the U.K. was stopped on Sunday night, either by plane or ferry, because of the new strain of the virus in England.

This has been a huge blow to the thousands of Irish people who were about to come home for Christmas from Britain, as they do every year.  It will cause bitter disappointment, even despair.  But it was inevitable.    Scotland had already banned travel with the rest of the U.K. and they have been joined by Belgium, the Netherlands, Italy, France, and Germany, all imposing restrictions on travel, with other European countries likely to follow.

And it's all due to the serious concern there is about the new variant of the virus in England which is much more infectious, spreading up to 70 percent faster than the original Covid.

The closure of the airports in the Irish Republic to flights from the U.K. since Sunday night has made some of the Irish in Britain coming home for Christmas take alternative routes.  More than 40 flights arrived in Belfast and Derry from the U.K. on Monday.  These are likely to have brought in many people heading south for Christmas and avoiding the ban in Dublin Airport.

All of which makes the lack of any restrictions at the border here very questionable, particularly since there are reports that the new strain of the virus has arrived in the North already.  Completely closing the border here is next to impossible for various reasons, one of which is the number of back roads.  But some effort could be made, like restrictions and checks on the Dublin-Belfast motorway and the train service.

The ongoing official advice here is that all non-essential travel should be avoided.  Advice is one thing; taking action is something else.

Of course, it is difficult and emotional for us, since so many of the Irish who live in the U.K. and elsewhere come home for Christmas every year.  But in comparison with the Christmas lockdown now imposed on London what is being allowed in Dublin and elsewhere here seems risky, to say the least.  It seemed risky last week and it's even riskier this week with the new mutation of the virus so close to us.

Despite all this doom and gloom, however, people here have been doing their best to stay positive.  Stores saw a surge in Christmas shopping last week.

But it's not the same as usual.  The atmosphere in Dublin is subdued.  There are no buskers on Grafton Street, no choirs outside the GPO singing carols to raise money for the homeless.

On top of all this there is Brexit to worry about.  Given our wider worries, that may seem irrelevant or ridiculous at the moment.  But the brinkmanship in the negotiations has continued and we are now just days away from the end of the year when Britain will be out of the EU, with or without a deal.  No deal would be a disaster for everyone -- but particularly for Ireland.

It's almost inconceivable that this would happen since a trade deal is in everyone's interest.  But there are still outstanding issues separating the two sides.

The most difficult is the so-called level playing field -- the acceptance by the U.K. that they will have to accept the same standards and rules for food, manufacturing, business, labor, environment, medicines, electrical products etc., etc., as those in the EU if there is to be anything like free trade.  Without that, companies and workers in the EU would be at a serious disadvantage if the British lowered standards to cut costs and prices.

The other outstanding issue is fishing rights in the rich U.K. waters where EU boats (including Irish trawlers) now catch much of their fish. Given that fishing makes up just one-tenth of one percent of the U.K. economy, allowing it to cause a No Deal exit would be crazy.

But Johnson has built taking back control of British waters into a big sovereignty issue, probably to distract from other compromises he is going to have to make to get a free trade deal.  So anything is possible, even if Britannia no longer rules the waves.