Count Dante, "the world's deadliest man," was an Irish American 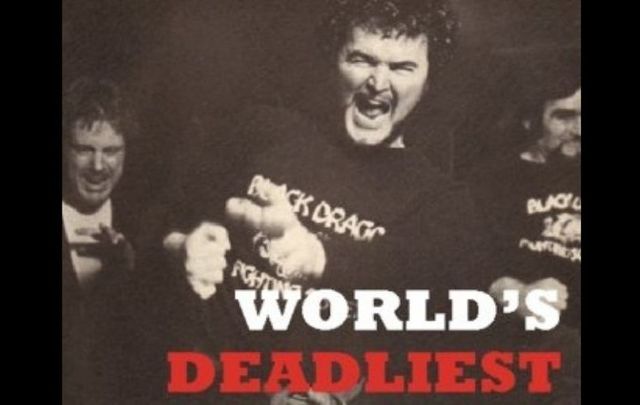 Count Dante was born John Timothy Keehan on the 2nd of February 1939 in Beverly, Chicago to a respectable Irish American family. His father, Jack Keehan was a highly respected physician and director of Ashland Bank. His mother Dorothy appeared on the Chicago Tribune's society pages occasionally.

Keehan was educated at Mount Carmel High School, he boxed at a decent level in his teens fighting out of Johnny Coulon's 63rd Street boxing club. Upon high school graduation, Keehan enlisted in the Marine reserves and subsequently the Army (1958-1961) where he learned hand-to-hand combat.

It was during Keehan's time in the Army that he met and trained under notable martial arts experts T.Y. Wong and Ed Parker. After he left the military, Keehan trained under legendary master Robert Trias, receiving his black belt and becoming a Sensei himself. He was appointed director of the United States Karate Association (USKA) until 1962.

(In the 1960/70s, martial arts really took hold of America. Bruce Lee was one the biggest movie stars in the world.)

Keehan was generally respected and renowned in martial arts. He was a big physical guy with a solid boxing background. People started to wonder about Keehan when he began making peculiar claims that he fought as a guerilla in the mountains during the Cuban Revolution.

In 1964, Keehan was expelled from the USKA at 25 after an argument with Robert Trias. Keehan claimed afterward he was expelled for insisting on being allowed to train black students. The USKA had a 40% Black membership at the time of his expulsion.

In July 1965, Keehan was apprehended by police attempting to dynamite a rival judo and karate school. Keehan and another instructor were observed planting a 40-inch dynamite fuse and blasting camp to the window of the rival school. Keehan subsequently claimed the incident was only a misconceived drunken prank. He received two years probation for the incident.

In 1967, Keehan legally changed his name to Count Juan Raphael Dante. He started telling people his family were of noble Spanish heritage, that his parents had fled Spain to America during the Spanish civil war, changing their surname as means of protection. It never dawned on Keehan that Dante was in fact an Italian surname.

Keehan grew disillusioned by orthodox martial arts. He decided to create his own deadlier version more applicable to street fighting. He called it the "The Dance of Death" or the Kata-Dante.

The ads read: "Yes, this is the DEADLIEST and most TERRIFYING fighting art known to man—and WITHOUT EQUAL. Its MAIMING, MUTILATING, DISFIGURING, PARALYZING and CRIPPLING techniques are known by only a few people in the world. An expert at DIM MAK could easily kill many Judo, Karate, Kung Fu, Aikido, and Gung Fu experts at one time with only finger-tip pressure using his murderous POISON HAND WEAPONS. Instructing you step by step thru each move in this manual is none other than COUNT DANTE — THE DEADLIEST MAN WHO EVER LIVED."

By mail order, the customer would receive Count Dantes instruction booklet titled "World's Deadliest Fighting Secrets" outlining "the dance of death" at each step as well as a free membership card to the Black Dragon Fighting Society. The following year, a new and improved far deadlier version would be advertised.

Count Dante would regale his followers of his secret "death matches" in Thailand and China, winning these encounters by killing his opponents in front of crowds of thousands of cheering spectators.

On the 28th of July 1968, it was reported on "the National" informer that Count Dante had shown up at Muhammad Ali's house on the south side challenging him to a duel.

On the 24th of April, 1970, Count Dante and six of his students carried out a Dojo storm on the Green Dragon Society's Black Cobra Hall. Allegedly they claimed to be police. Dante began the attack by striking a blow against the bewildered rival dojo instructor, prompting Dante's students to commence an attack on the rival students.

The attack was soon brought to a swift halt after Count Dante's great friend and fellow Sensei Jim Koncevic was slashed with a sword before being impaled by a spear resulting in death.

All parties were brought before the courts and subsequently acquitted. The damage to Count Dante was irreversible, fading into a life of alcoholism.

Count Dante died of internal hemorrhaging due to a bleeding ulcer on the 25th of May 1975 aged 36.

A criminal lawyer who represented Count Dante during the dojo trial claimed Dante was the mastermind behind the 1974 Chicago Purolator vault robbery resulting in 4.3 million dollars being stolen. Dante died before the trial which resulted in the conviction of all but one person involved.