Does anyone seriously think that our views on climate change carry much weight internationally? And should the Irish government be more worried about its finances? 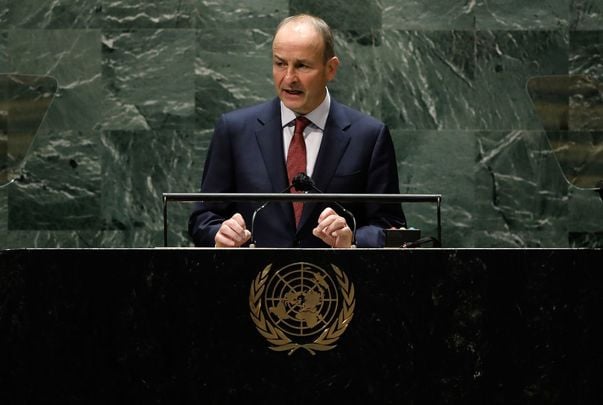 Ireland is one of the most indebted countries in the world, we're at risk of losing our beloved multinationals and we're slow to make sacrifices for climate change... dark clouds are on the horizon.

Last week as Taoiseach Micheal Martin lectured the world about climate change at the UN in New York, I have to admit I was ignoring his message here at home.

When we built our new house 20 years ago we put in advanced insulation, triple glazing, and natural gas central heating (which everyone was encouraged to do at the time because it was supposed to be more eco-friendly than oil).

But I also put in a glass-doored wood-burning stove in the lounge area because nothing beats the flickering flames of a real fire on a cold night.  So last week, like I do at this time every year, I ordered my logs for the winter from a forester in the Wicklow Mountains.  He supplies the best hardwood logs, usually beech, air-dried in an open shed for at least a year (€85 a ton).  They produce high heat, little ash and, with some turf added, a few of them will last an evening.

Of course, all of that is soon to be verboten.  Like all fossil fuels, gas and timber are to be avoided in the future if we want to stop global warming and climate change.

Heat pumps (drawing heat up from underground) are to replace oil or gas central heating boilers.  Turf is a complete no no because of the particulates it releases into the air and Bord na Mona -- the national turf board -- has now stopped harvesting it.

Even wood-burning stoves, once regarded as the cleanest way of heating your home, will not be acceptable in future.  So I felt a little guilty last week when I was ordering my logs.  But I went ahead anyway because I know that bone dry hardwood logs produce very low particulates, especially when used in a wood-burning stove.

At the back of my mind, however, I knew that this could be the last time.  Like everyone else, I need to move on.

Making the necessary changes is not going to be easy, however.  Even those of us who accept completely that climate change is at crisis point and fossil fuel use has to stop are delaying and talking rather than doing.  We're all caught in the Saint Augustine mindset -- Lord, Make Me Pure, But Not Yet!

Therein lies the problem.  Talk is cheap.   Taking action is very expensive -- and very complicated.  So in the meantime we all blather at each other about climate change and do very little, including world leaders.

And there was a fair amount of blather going on at the UN in New York last week, not least from the Taoiseach.   Of course, we want to make the most of our seat at the Security Council since we put so much effort into getting it.  And the Taoiseach's address to the General Assembly was an opportunity to put Ireland in the limelight on the global stage.

But does anyone seriously think that our views on climate change carry much weight internationally?  What the leaders of the U.S., Russia, China and India think does matter.

There was something faintly ridiculous in Martin attempting to lecture the world on the topic.  As was our attempt to push through an acceptance of the link between climate change and global security.  Correct and sincere though it was, it all seemed to be a bit above our pay grade.

In the Irish media last week the coverage of the Taoiseach's trip to New York was minimal.  The air of unreality that surrounded his UN appearance was largely due to the feeling that while he was basking in the New York limelight, dark clouds are gathering over us here at home.  And most of that has to do with the state of government finances.

As you will remember, even before Covid hit we were proportionally already one of the most heavily indebted countries in the developed world thanks to the crash here a decade ago.  We were just about getting to the stage of being able to run balanced budgets again and to start making small reductions in the national debt when Covid arrived and blew those good intentions away.

Now we are again running massive deficits and will continue to do so in the upcoming budget and probably for the next few years.  That's not our fault, but our management of the cost of the pandemic here has been less than perfect.

Basically, we threw money at the situation regardless of whether it was always justified.  Our attempts to rein this back in have been poor and slow.  One ongoing example is that we are still giving thousands of construction workers and hospitality workers the pandemic unemployment payment even though there are chronic staff shortages in both areas.

Now there is a debate going on about the need to give a bonus payment to reward all the frontline workers who got us through the pandemic. That is understandable.  Their efforts deserve recognition, particularly the nurses and doctors who worked so hard for months on end and at considerable risk to themselves.

One suggestion is that all public workers (those on the state payroll) should be included, even those who were working at home. If so, the cost may well be a billion or two.

There are also some unpredicted costs coming down the tracks.  The defective building blocks used in the construction of thousands of homes in the north east of the country -- the Mica scandal -- may well cost the state another billion or more if the families involved are to be fully compensated.  Campaigners raised this issue with the taoiseach even during his New York visit.

Then there is the wider housing crisis.  The Housing for All plan announced by the government recently will cost billions.

And there is the crisis in health, with a huge backlog of non-Covid patients waiting for treatment and procedures that could not be done during the pandemic.  Last weekend it was revealed that the Health Service Executive is planning to hire 6,000 extra permanent staff to tackle the waiting lists, in addition to the thousands already hired this year.  Necessary, yes, but that will be another billion or two.

Going back to our original topic, the actions already agreed by the government (which includes the Green Party) to tackle climate change will also be starting, in transport, home heating and much more.  A particular difficulty for us is the size of our agriculture sector and the carbon and methane emissions that it produces. Incentivizing people across the country to change will cost the state billions if it is to be effective.

As the saying goes among the politicians, a billion here, a few billion there, before you know it you're talking real money.  Our problem is that we don't have it, and borrowing on a massive scale to fund everything is dangerous for a country with such a huge debt.

Behind all this is the political imperative.  As Fianna Fail and Fine Gael battle against the rise of Sinn Fein in the polls, there will be an understandable determination to throw money at all our problems, no matter how many billions is involved and whether we can really afford to take on even more staggering levels of debt.  And they will want to do as much of this as they can before we get to the next election early in 2025, assuming they last that long.

This can be seen already in statements made by ministers in advance of the budget for 2022 to be unveiled in a couple of weeks.  There are promises of increases in pensions, welfare and other areas to keep up with inflation, and at the same time claims that taxes must be cut to give people a break.

This has prompted the Fiscal Advisory Council, the independent body here that monitors state spending and budgets, to issue a warning that we can't go on like this.  They say that a choice must be made between raising taxes or reducing planned extra spending so that debt can be kept under control.  That's putting it mildly!

And all of this is before we factor in the effect of the proposed OECD global minimum tax rate for multinationals which now has the backing of 130 countries. The big multinationals (mainly American) have enjoyed sweetheart deals on tax here for ages, even though of course we're NOT a tax haven!

So many are here that, even though they pay very low rates, they now provide a big chunk of our revenue every year.   Without them we would be in deep trouble.

Given the scale of the dark clouds gathering above, it must be tempting for the present administration to throw in the towel and accept that Sinn Fein will be leading the next government.  Since the Shinners have the easy answers to all our problems, let them at it!