Joe Kernen, the host of CNBC's Squawk Box, became increasingly shocked when he learned that Ireland uses the Euro and not the British pound during a live TV segment. 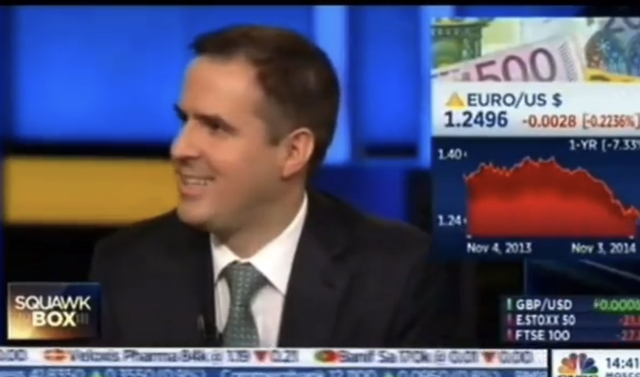 Michael Shanahan, a man with the patience of Job: "Why wouldn't we have Euros?... We're very happy with it." CNBC / Twitter

A clip of a US financial show's anchor who simply can not fathom that Ireland's currency is Euros and not the British Pound has gone viral, even after seven years. It has to be seen to be believed.

Back in 2014, the head of Ireland's foreign development agency, the IDA, was interviewed on the financial program, Squawk Box. The interview ended up being a little more rudimentary than he expected - trying to convince the anchors the Irish currency is Euros and we don't have the same currency as Scotland.

Chief Political Correspondent for the Financial Times, Jim Pickard, tweeted the old clip in 2021 with the comment "broadcasting at its worst and also best," and the reaction online has been pure gold.

broadcasting at its worst and also best
pic.twitter.com/W52rR8ejNo

Martin Shanahan, the then newly appointed COO of the IDA, was asked how “the weaker euro” impacted tourism in Ireland. Before he could squeeze out an answer anchor Joe Kernen who said: “You’re pounds anyway aren’t you?”

“Why wouldn’t we have euros in Ireland?” Shanahan replied.

“We’ve had the euro for some time and we’re very happy with it,” Shanahan responded.

But Kernen remained undeterred. “What about Scotland, I was using Scottish pounds,” he said, and Shanahan agreed that this different country did indeed use a different currency.

“What? Why would you do that?” Kernen said.

“Why wouldn’t we do that?” Shanahan responded.

Shanahan then delivered a geography lesson: “They’re part of the UK, we’re not.”

“Aren’t you right next to... sort of the same island?” Kernen said.

Shanahan then explained that Northern Ireland used the pound and this was too much for Kernen to compute.

“They do?!” he shouted. “It’s just too confusing,” he said. After a different reporter tried to get the interview back on track again, Kernen interjected one last time, and said:

“I’m not sure I follow your logic,” Shanahan said. Kernen went on to claim Northern Ireland had better golfers, apropos of literally nothing.

Many of the responses on Twitter praised Shananhan's patience.

One said, "He's very gracious, considering." Another wrote, "I admire the Irishman's patience and his tolerance for contact embarrassment."