The clash of the Irish Brigades at the Battle of Fredericksburg

IrishCentral Contributor John Joe McGinley looks at how the Union Irish Brigade faced off against fellow Irishmen fighting for the Confederacy at the Battle of Fredericksburg. 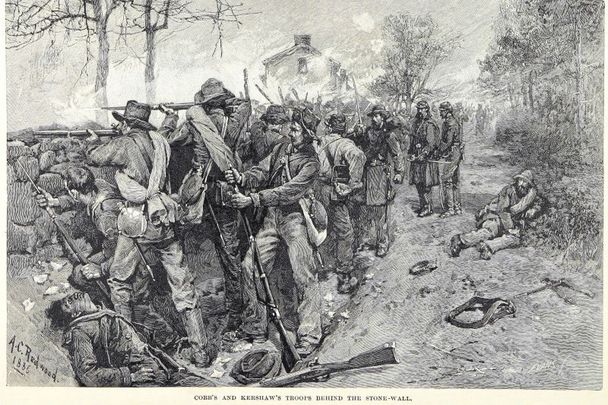 Confederate troops commanded by Generals Cobb and Kershaw fire at attacking Union soldiers from behind a stone wall during the Battle of Fredericksburg. Public Domain / US Library of Congress

Of the many Irishmen who fought in the American Civil War, the Union Irish Brigade is remembered to this day, famous for its valour, bravery, and sacrifice.

While they are rightly recognised for their valiant efforts at Gettysburg in 1863, a year earlier, the Union Irish Brigade endured their greatest hardship of the war when they faced off against fellow Irishmen fighting for the Confederacy at the Battle of Fredericksburg. 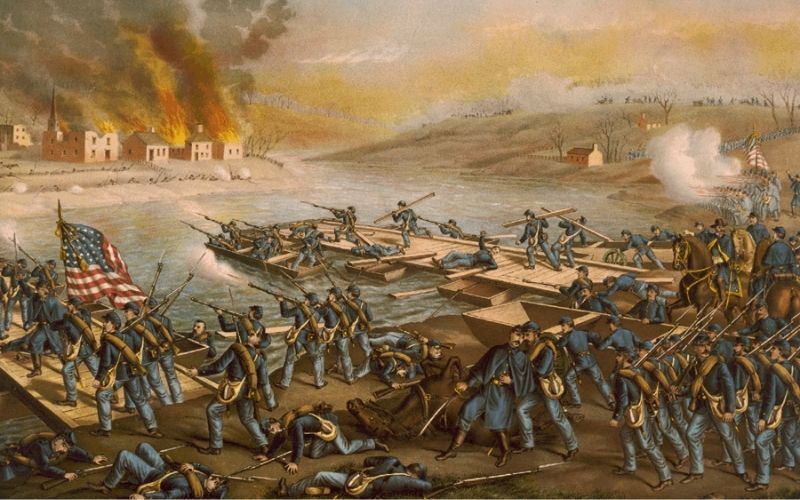 The Battle of Fredericksburg. (Public Domain)

As 1862 dragged on, the Union was no closer to winning the civil war and President Lincoln dismissed General George McClellan, whose cautious nature had allowed General Lee and his Army of Northern Virginia to escape after the battle of Antietam. His replacement was Major General Ambrose Burnside, who was tasked by Lincoln to capture the Confederate capital of Richmond, which was 100 miles from Washington, a distance an army could reach in a matter of days. However, almost two years into the war, the Union seemed no closer to victory.

Before Burnside could take Richmond, he would need to overcome Lee's army now encamped outside the town of Fredericksburg, which stood on an incline that sloped down to the Rappahannock River which the Union forces crossed using pontoon bridges.

Defending the town was a series of ridges now heavily fortified by the Confederates, these were Prospect Hill, Telegraph Hill, and Marye's Heights.

Despite having assembled a force of 120,000 men, Burnside was at a strategic disadvantage as Lee now commanded the high ground.

At 4 am on December 11th,  the Irish Brigade composed of the 63rd, 69th, and 88th New York and the 28th Massachusetts and the 166th Pennsylvanian infantries crossed the Rappahannock ready for battle.

The assault on Marye's Heights began on the 13th of December. About a mile up the hill, the Confederate infantry was ready for the Union advance, massed in a sunken road protected by a sturdy stone wall.

Burnside ordered four separate charges towards Marye's Heights before noon, but each attack was decimated by heavy Confederate fire from the sunken road positions. The Confederate infantry was four and five men deep, sheltered in their well-defended position. As soldiers at the wall fired, two or three men behind them re-loaded muskets creating a devastating constant rate of fire.

As the Irish Brigade looked on at the slaughter, they knew they would soon be involved in the fighting.

At 12.30 pm, Burnside informed General Thomas Francis Meagher, the inspirational commander of the Irish Brigade, that his men would lead the fifth charge.

As Meagher and his men began their march up towards the Confederates, they were not the only Irish regiments in the field. One of the two Confederate brigades defending the sunken road was the 24th Georgia regiment under the command of General Thomas RR Cobb.

The 24th was proud of its Irish roots and flew a green flag with a golden harp. It was comprised of Irish emigrants many of them from the same counties and towns as the Union Irish Brigade, which now marched up towards them within range of their guns. The Georgia Confederates had also immigrated to escape poverty and famine in Ireland. Fate had decided that instead of landing in New York, they had arrived at Savannah, when the conflict erupted, they joined Confederate ranks.

As Meagher’s men advanced, the Confederate Irish saw the green flags of the Irish Brigade and cursed the fate that now forced them to fire on their fellow Irishmen. However, they were soldiers, and they did their duty as battle commenced.

When the Union forces advanced, Meagher injured his knee, but undaunted, he borrowed a horse and rode up the hill to be with his men now being cut to ribbons by relentless Confederate fire from the sunken road. However, a shell fragment then struck Meagher in the leg, and he was thrown from his horse, and he was carried from the battlefield.

Some of the Irish Brigade took shelter behind a small brick house on the slope of the hill. Others lay still, flat on the ground praying that the heavy fire would pass above them.

As the attack stalled, Major James Cavanaugh from Tipperary rallied the remaining men of the Irish Brigade shouting: “Blaze away and stand it boys.”

The men of the Irish Brigade followed their Major and got within fifty yards of the stone wall before they were halted by a ferocious folly that killed many and struck Cavanaugh in his thigh. Colour Sergeant William H Tyrrell no longer able to stand, bravely waived the harp and shamrock regimental colours, attempting to rally his men forward, until musket balls ripped into him, and he fell dead.

While the Irish Brigade had advanced further than any other attack, they knew their task was impossible and retreat was the only option. Meagher’s brigade had lost 14 of their 15 officers and 512 of the 1000 men who had begun the battle. As for the Confederate Irish, they had lost 100 men.

As the Irish Brigade fell back, their compatriots in the 24th Georgia stood and cheered the retreating fellow Irishmen in the Union forces.

Despite further assaults, the Union forces could not dislodge the Confederate Irish and on December the 16th, Major General Burnside ordered a retreat to Falmouth. President Lincoln relieved him of command shortly after.

The Irish Brigade would go on to fight at Gettysburg, while the 24th Georgia were also present, they would fight on with Lee until the surrender at Appomattox in 1865. By then only 4 officers and 36 soldiers remained of the proud Confederate Irish regiment that fought against their fellow Irishmen at the battle of the sunken road, on that terrible day in December 1862.