Unsung Irish heroes of the Battle of Gettysburg

Patrick Henry O'Rorke arrived in America from Ireland as a small child. He would later play a key role in the Union victory at Gettysburg. 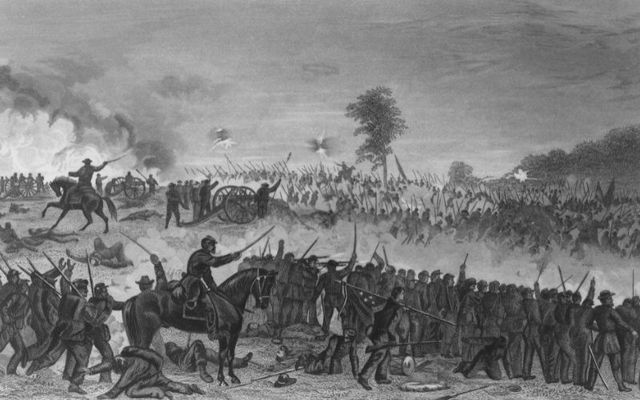 Artist's depiction of the Battle of Gettysburg. Getty

The Battle of Gettysburg, the turning point in the American Civil War, was fought during the first three days of July 1863.

A key battle charge that saved the union army occurred earlier in the battle and it was led by Patrick Henry O’Rorke.

Patrick Henry O'Rorke arrived in America from Ireland as a small child. His father moved to Rochester, New York, to work in the Erie Canal economy after immigrating. Young O'Rorke excelled in school and won a scholarship to the University of Rochester.

His father died around that time and young O'Rorke went to work as a stone cutter to support his family instead.  Years later he won another scholarship. This time to West Point, then the premier engineering school in the United States.

West Point was in reality a secular temple of engineering and "the art of war."  Its de facto academic leader was the little Irish-American Dennis Hart Mahan, the most influential American who doesn't have a biography.

O'Rorke excelled academically at West Point.  He had the distinction of graduating first in the class where George Armstrong Custer was last. His graduation was accelerated and he went straight from West Point into the war.  He distinguished himself at the siege of Fort Pulaski before returning to Rochester to take command as colonel of the newly formed 140th New York infantry. It was a mixed American unit including many Irish and Germans:  Clancys, Collinses, Murphys, Hoffmans,  Meyers, Shultz.  It was lightly engaged at Fredericksburg and Chancellorsville before Gettysburg.

When the 140th arrived on the Gettysburg battlefield on July 2nd they were marching right into the fight.  On the way, they ran into the general sent to inspect the left-wing of the Union army's defenses.   The general knew O'Rorke and said "Paddy, you know me.  Forget your orders.  Get to that little hill over there.  We have to hold it."  The 140th reached the hill just as the center of the union brigade collapsed, its commander dead.   O'Rorke yelled "charge!"  and the 140th counterattack drove off the Confederate. Leading the charge, O'Rorke was killed instantly by a sniper's bullet and didn't live to write a memoir about his heroics.

There were other unsung Irish heroes at Gettysburg even more significant than O'Rorke. The battle begins with General Bufford's cavalry division ambushing the Confederate army on the outskirts of Gettysburg.   Bufford's two brigade commanders were "Buford's Hard Hitter" Thomas Casimar Devin born to Irish parents in New York and William Gamble born in Lisnarrick, County Fermanagh, Ireland.  Their job in the early hours of the battle was to hold on until help arrived.

The help Bufford, Gamble, and Devin were waiting for was Major General Fulton Reynolds, commander of the left-wing of the Army of the Potomac and General George Gordon Meade's most trusted lieutenant.  Many called him the most respected soldier in Lincoln's army.  Some believe he was asked to lead the army but declined because he wasn't offered enough autonomy.

It was Reynolds who made the decision to commit the Army of the Potomac at Gettysburg. During his march in with the army's left-wing, he assessed the terrain and tactical situation and saw a great opportunity for a Corps d'Armee trap.  With the entire Army of the Potomac within one day's march, at first, the Confederates would seem to be winning, but as tens of thousands of Union reinforcements like O'Rorke and Chamberlain streamed onto the battle, the Confederates would, in fact, be losing.

Historian Shelby Foote wrote that many considered Reynolds  "not only the highest-ranking but also the best general in the army".

Army of the Potomac commander Major General George Gordon Meade went along with the decision.  Reynolds was shot by a sniper's bullet while directing troops in the frontlines and did not survive the battle.

Reynolds and Meade were scions of Pennsylvania's old Irish families.   You could even say Meade's family saved the Union twice.

"Gen. MEADE, the new leader of the Army of the Potomac, is the grandson of GEORGE MEADE,  of Philadelphia, an eminent Irish-American merchant, whose firm (MEADE & FITZSIMMONS)  contributed in 1781 $10,000 to a fund for the relief of the famishing army of Gen. WASHINGTON."

On the second day of the battle, two absolutions under fire would be given.  One by Father Joseph O'Hagan of New York's Excelsior Brigade. The more famous one by Father William Corby of the Irish Brigade. Corby's is commemorated at Notre Dame by a painting that's part of the permanent collection and a statue that the students call "fair catch Corby."

On the third day to the battle when Robert E Lee took his last gamble on victory,  the 69th Pennsylvania regiment held the center of the Union line.  In the movie  Killer Angels scene where Confederate General Lewis Armistead leads his men into the Union lines, you can glimpse the 69th's green flag as its soldiers shoot down Armistead and his men.   The 69th was promptly reinforced by Colonel James Mallon's Tammany Hall Regiment, the 42nd New York.

Meade's victory at Gettysburg wasn't as conclusive as it could have been.   Lee escaped the trap.  He'd been as well versed in French tactics at West Point as Reynolds and Meade.  Lee used La Manoeure Sur Les Dierieres to invade the North three times.  The Shenandoah Valley and Blue Ridge Mountains could be used as a walled highway to flank the North's defenses, invade the North's heartland, and threaten the capital at Washington.  It was also a secure escape hatch. 100 years later the North Vietnamese would use this strategy and the Ho Chi Minh trail to defeat the United States in Vietnam.

The game of military chess had been played many times in the classrooms and Napoleon Seminar at West Point.  Its architect was the little Irishman Dennis Hart Mahn,  Professor of Engineering and the Art of War.