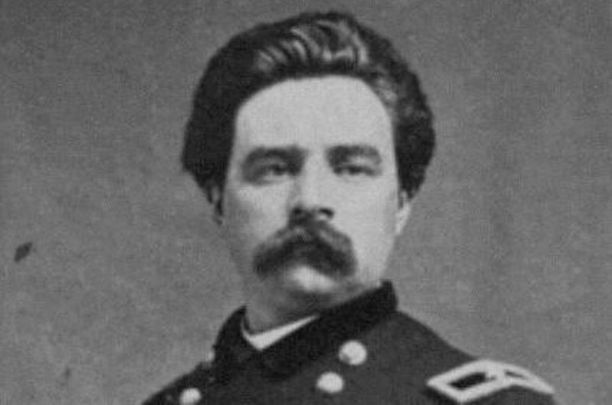 Brigadier General Thomas Alfred Smyth was a hugely popular and effective leader and a soldier with a flair for war and a taste for adventure.

Thomas Alfred Smyth was born in Ballyhooly in Cork County on Christmas day 1832. He worked on his father’s farm until emigrating to the United States at the age of 22, in 1854. He settled in Philadelphia, Pennsylvania, and obtained work as an apprentice wood carver and coach & carriage maker.

Smyth was a restless young man, and he signed on as a mercenary for General William Walker’s expedition to Central America in search of adventure and fortune.

Life as a mercenary

The Democratic Party sought military support from Walker who, to circumvent U.S. neutrality laws, obtained a contract from Democratic president Francisco Castellón to bring as many as three hundred "colonists" to Nicaragua.

These mercenaries then received the right to bear arms in the service of the Democratic government. Walker sailed from San Francisco on May 3, 1855, with approximately sixty men, one of whom was Thomas Smyth. Ironically, three of his new comrades would go on to become officers in the Confederate army. Also among this strange party were the English adventurer and serial mercenary Charles Frederick Henningsen and the famous explorer and journalist Charles Wilkins Webber, who would die in one of the initial engagements in Nicaragua.

After three years fighting in Central America, Smyth returned to Philadelphia and met and then married his wife, Amanda Pounder. The couple moved to Wilmington Delaware where their only child Emma was born. Smyth returned to his trade as a carriage maker, but another adventure was soon to begin.

At the outset of the Civil War in 1861, Smyth formed and led an all-Irish militia called the ‘national guards’ and when in September 1861 President Lincoln called for volunteers, Smyth enlisted with another all-Irish unit, the 24th Pennsylvania Infantry. He rose to the rank of Captain fighting alongside his countrymen in the early part of the Civil War.

In October 1861, Smyth was commissioned as a major with the 1st Delaware Infantry.

Smyth fought in many bloody battles including Antietam in September 1862 and the battle of Fredericksburg just a few months later. For his leadership and valour, Smyth was promoted first to lieutenant colonel and then to full colonel. By the end of 1862, Smyth had earned the respect of his fellow men and commanding officers.

1863 would prove a bloody year for Smyth and his men who he led at Chancellorsville in May 1863.

During the Gettysburg Campaign in July 1863, he commanded the 2nd Brigade, 3rd Division of the II Corps. As the battle swung between defeat and victory, his men helped defend Cemetery Ridge and advanced to the area of the Bliss farm to oust enemy sharpshooters.

His brigade was also placed along the stone wall during the now-famous Confederates' last-ditch Pickett’s Charge. During the fighting, Smyth was hit in the face, whilst seriously wounded he joked he’d gladly trade his nose for victory.

After Smyth’s performance at Gettysburg, General Hancock recommended Smyth for promotion to brigadier general, although the promotion took a year to become official.

Between March and May 1864, Smyth temporarily took command of the Irish Brigade. Finally, on October 4, 1864, Colonel Smyth was finally promoted to the rank of brigadier general during the Siege of Petersburg in Virginia.

After this promotion, the officers under his command secretly collected $1,200 and purchased a horse, saddle, saddle cloth, saddlebags, holsters, bridle and martingale, belt, sword, sash, and shoulder-straps. All the trappings of his new rank.

His men quietly arranged everything in his quarters and gathered to surprise him. Smyth was greatly moved by the actions of his men and never forget the kindness.

For the next six months, Smyth commanded the 2nd Division of the Gibraltar Brigade, an infantry brigade in the Army of the Potomac. It got the nickname from their ability to withstand Confederate attacks in many battles. Standing strong like the ‘Rock of Gibraltar’.

Through much of the war, the Gibraltar Brigade was composed of the 4th Ohio Infantry, 8th Ohio Infantry, 14th Indiana Infantry, and the 7th West Virginia Infantry. The brigade was augmented by the 24th and 28th New Jersey before the Battle of Fredericksburg. Before the Overland Campaign in early 1864, its ranks were bolstered by the addition of the 1st Delaware, 12th New Jersey, and the 10th New York Battalion.

Smyth's meteoric promotion in the Union Army was paralleled by his rise in another organisation, the Fenian Brotherhood. By late 1864, Smyth had been ‘commissioned’ as the head circle of the Fenian group within the Army of the Potomac. He was elected to the Fenian Council in January 1865 but withdrew from the board due to the pressures of his military duties just a month later.

In April 1865 Smyth was serving as a divisional commander. On a cold and rainy morning on April the 7th, he was riding along his skirmish line at Farmville during a Confederate retreat from Petersburg, Virginia.

Heavy fire rang out from the Confederate line. Fire rang out and he was shot through the mouth by a sharpshooter, the ball shattering his cervical vertebra.

Taken to a nearby house Burkes Tavern, he died two days later.

On March 18th, 1867, President Andrew Johnson nominated Thomas Smyth for posthumous appointment to the grade of 'brevet major general of volunteers to rank’, from April 7th, 1865, the date he was mortally wounded.

The United States Senate confirmed the appointment on March 26th, 1867.

Thomas Smyth was the last Union general killed or mortally wounded during the war and is buried in Wilmington and Brandywine Cemetery in Wilmington, Delaware.