Mary Sophia Hill, the Florence Nightingale of the Confederacy

Irish woman Mary Sophia Hill was a Civil War nurse who became a heroine in the eyes of all the troops she treated. 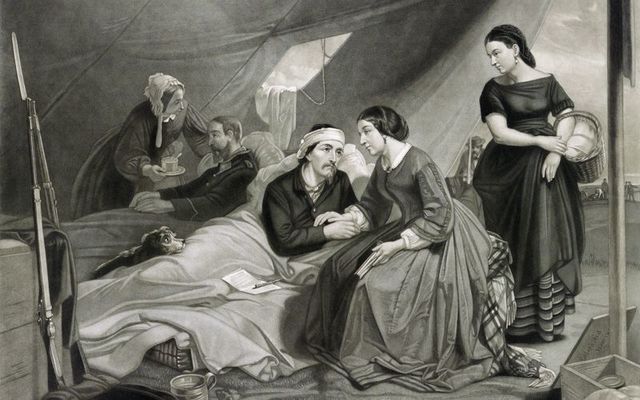 Women attend to wounded soldiers in a hospital tent during the Civil War in this vintage illustration. Getty

The remarkable story of Irish woman Mary Sophia Hill,  a Civil War nurse who became known as the "Florence Nightingale of the Confederacy."

In the U.S. before the Civil War, almost all nursing care was done at home. Caring for your family when they were sick, was looked upon as just part of a woman’s job.

Many of the more than 2000 nurses who served during the Civil War are unsung heroes.  Some did leave accounts, such as Louisa May Alcott, the author of "Little Women,"  who was a nurse at the Union Hotel hospital in Georgetown.  Due to no real record keeping and the lack of attention being paid to the many women and some men who served as battlefield angels, their names are mostly forgotten.

One of those was Dublin woman Mary Sophia Hill.

Her activities during the course of the war would see her become a heroine in the eyes of all the troops she treated, who would refer to her as the "Florence Nightingale of the Confederacy."

Born on November 12, 1819, in Dublin, Mary Sophia Hill was the daughter of a physician, who, along with her twin brother Samuel, spent part of her early life living in England.

When Samuel moved to New Orleans in December 1850, Mary went with him.

Described as “a teacher and a woman of independent means,” she quickly established herself in her new home, teaching English, French and music.

All went well until brother and sister had some sort of altercation, and Samuel left in a fit of pique to join the Confederate Army at the outset of the Civil War.

Mary Hill went off to war to “keep an eye on her brother,” following  the Louisiana 6th infantry which Samuel had joined, a largely Irish regiment that was destined to serve in the Army of Northern Virginia.

Mary felt that her brother was not cut out to be a soldier. She later wrote:

“I concluded I would follow him to Virginia to care for him … and that I would, wherever needed, care for the wounded, the sick, and the distressed.”

She even went as far to write a letter to the British Consul asking him to arrange for his discharge, to no avail. As Samuel marched off to war and was transferred into the Irish Brigade and then ordered to Richmond, Mary went too.

Mary attached herself to the unit’s medical staff as a nurse, and it was not long until her services were required. She soon found herself facing the harsh realities of war as casualties began to stream in following the first battle of Manassas, also known as the Battle of Bull Run by Union forces. 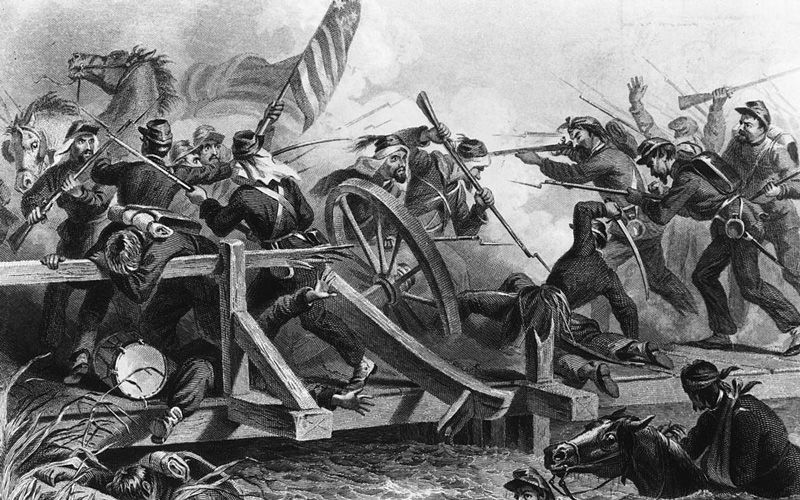 Fought on July 21, 1861, north of the city of Manassas in Prince William County, Virginia, this was the first major battle of the Civil War. Nearly 36,000 men faced off in a battle, resulting in a Confederate victory followed by a disorganized retreat of the Union forces.

Mary cared for the wounded and recorded in her diary that she was:

“Asked by some to pick Minie balls out of their legs and arms, while they waited their turn of the doctors, who of course had to attend to the most serious cases first. They have not half supplies. I tore down all the window blinds and rolled them into bandages; nor was there half hospital accommodations. I made good chicken-soup and flew around generally. The sights of the wounded were fearful to look at; I was nearly wild with excitement, thinking, as each batch of wounded arrived, I might see my brother, or my Louisiana friends of Walker’s Brigade.”

Mary was relieved that her brother's regiment was not seriously engaged at the battle. As the war progressed, the Confederate soldiers under her care came to call her ‘mother’ because of her attentiveness to their needs when they were sick and wounded.

Throughout the years, she always found time to look after her brother, trying to make sure that  he was well fed and clothed, while often despairing at his lack of ability as a soldier!

While Sam’s regiment prepared to take part in Stonewall Jackson’s 1862 Valley Campaign, Mary decided to travel to the Richmond hospitals to see what she could do for the wounded soldiers there. She soon learned that the 6th Louisiana were engaged and decided to re-join her brother and his comrades. While en-route, she heard a report that her brother had been killed in action, news which Mary describes as driving her "nearly crazy," Luckily, the reports were premature, although Sam had been gravely wounded.

While nursing him back to health in Richmond, Mary also worked in the Louisiana Hospital, where she cared for many men who were wounded during the Seven Days Battles, a series of battles over seven days from June 25 to July 1, 1862.

Soon Mary was not only caring for her brother but all the members of the regiment that were wounded or became ill. Such was her dedication that her efforts were widely recognized by officers and privates alike in their reports and letters.

In later years she would recall that during the Seven Days Battles around Richmond, “she saw many a poor mother’s son decently buried, and from dying lips took charge of loving and last words to wife, sister, mother."

Mary was matron of the Louisiana Hospital, seen by many as an angel of mercy and subsequently became known as: “The Florence Nightingale of The Army of Northern Virginia."

While her nursing vocation kept her busy, Mary still found time for other adventures.

Her British citizenship allowed her to move freely during the war between Confederate and Union controlled areas, which included New Orleans following its fall to Union forces in April 1862.

This enabled her to carry out further compassionate work, such as bringing news of killed and wounded soldiers to their families and loved ones behind the lines. However, her actions did not go unnoticed by the Federal authorities.

Mary returned to Dublin in 1863 to attend to family matters, leaving New Orleans on a pass from the Union provost marshal.  It was alleged in her absence that she was a Confederate spy, and upon her return in 1864 she was arrested by Union soldiers. 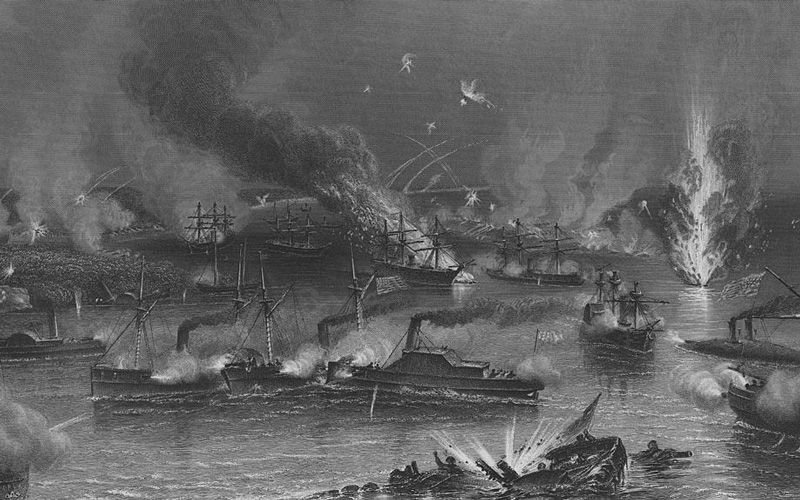 The capture of New Orleans in 1862. Credit: Getty

The charges were carrying a forged letter to an unknown (later proved non-existent) Confederate general and other letters for the enemy between the lines, along with clothes and food.

The last two charges Mary accepted, as the letters, clothes, and food were all for her brother Samuel.

The other charge she fought. During her trial, she questioned why she was arrested while there were at least three other ladies by the name of “Mary Hill” in New Orleans at the same time. She was found guilty of spying, and despite recovering from scarlet fever, she was placed in the Julia Street Woman’s Prison.

Mary was convicted and imprisoned for four months, suffering harsh treatment and cruelty before eventually being released when the British Consul pointed out that she was a British subject.

During her imprisonment, she tended to other prisoners.

It appears that her conviction ultimately was overturned through the actions of Christian Roselius, a Union lawyer who represented her before a military commission. Part of the case file includes letters from the heads of various Confederate hospitals attesting to her service.

In a compromise to save face, she was eventually sentenced "to be sent into the Confederacy as an enemy." Her health would never recover from her imprisonment.

But the ordeal did not halt Mary. She was sent on several confidential missions to Europe during the war years, and today relatives still have her "pass," which says, "Miss Mary S. Hill has permission to sail from a Confederate port under the usual military conditions." It is signed by James Seddon, secretary of the Army, and dated Sept. 16, 1864.

She returned to Ireland in 1865 and while visiting family she took the opportunity to help others once again with men involved in the war.

Her diary illustrates that the Irish experience of the American Civil War was not restricted to those who had left for America; she met an Irish family who gave her presents to take to their only son who was a sergeant in Company F of the 6th Louisiana, and a custom-house official who asked her to carry a letter to his brother in the war department in Richmond. Mary's help and information was greatly appreciated by families who had relatives fighting from their native Ireland.

It seems the glory of military life faded quickly for Samuel, who would have returned home eagerly had not Mary been there to bolster his fading interest and to care for him when wounded. The young man apparently was not soldier material; he was always losing his coat or his cartridge belt or some other equipment he needed, and his sister frequently had to replace lost items.

Mary's nursing career was interspersed with her attempts to get her brother transferred out of the service and out of harm’s way, her main goal in life. It was not to happen until late in the war, when he was finally reassigned to the Engineer Corps where he would survive the war.

After the war, Mary returned to Louisiana where she began voluntary working at a Soldiers Home for veterans of the Armies of Northern Virginia and Tennessee, rising to the post of matron. Mary would take no pay as the hospital was still trying to find its feet financially.

Her hard work was remarkable when you consider that Mary's health suffered badly due to her imprisonment and she was considered an invalid.

She decided to bring a lawsuit against the US Government for compensation for her war time imprisonment. This was for "two thousand pounds sterling, as damages for cruel treatment and false imprisonment during the months of May, June, July and August 1864 in the City of New Orleans, LA, and banishment therefrom,"

Sadly, she was unsuccessful in her claim.

Her declining health forced her to move to Brooklyn, New York, to live with her nephew William VanSlooten, where she died of cancer on January  7, 1902. Her brother Samuel was ill and could not even attend the funeral for his devoted sister.

Mary Hill stipulated that, upon her death, she should be buried in New Orleans.

When the train bearing her body arrived in the city, it was met by aging men in grey uniforms who accompanied her casket to the Greenwood Cemetery. Her coffin was draped in the flag of Camp 1, Army of Northern Virginia.

Her burial was reported in the New Orleans Times-Picayune for Jan. 13, 1902, it said: "Veterans Bore Her to the Grave. Wrapped the Stars and Bars Around Her Casket And Sounded Taps as the Earth Claimed Her. The Unusual Tribute Paid to Miss Mary Hill, Who Was One of the Heroines of the South’s Fight Against Odds."

Sadly, Mary was forgotten for many years until in March 2005, the President of the Louisiana Division of the Daughters of the Confederacy unveiled a granite grave marker dedicated to:

The mourners left a small green string of rosary beads with a green Irish shamrock hanging from it atop the stone on that March day of the marker dedication, in honor of the nurse from Ireland who will forever be known as the "Florence Nightingale of the Confederacy."