What happened to the Irish girl in this 1927 National Geographic photo?

In 2016, IrishCentral located Irish woman Bridget Kane nearly a century after she appeared in a National Geographic photo taken in her native Co Galway. 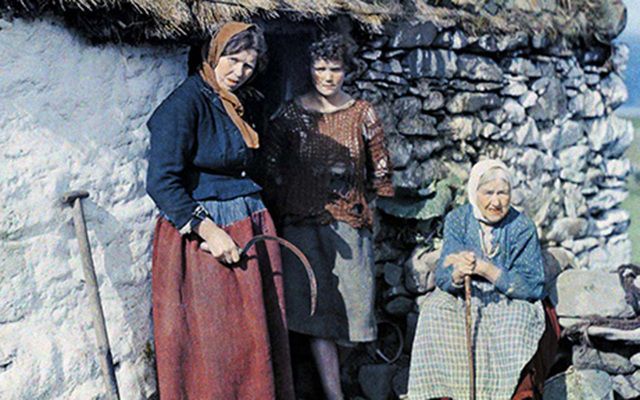 16-year-old Bridget Kane [center] moved to the US just months after the photograph was taken. National Geographic

After 94 years, IrishCentral has tracked down a young girl who appeared in a National Geographic photo from 1927. Read her story here:

In 2016, IrishCentral published a series of photos from a 1927 edition of National Geographic which documented the lives of the people in the then Irish Free State. Included among these pictures was a beautiful portrait of three women – three separate generations of one family –  stationed at the door of their thatched stone cottage in Co. Galway.

Now, thanks to an eagle-eyed reader with a very personal connection to the photograph, we know who these women were.

Bridget Kane, a resident of Lettergesh in Galway, was just 16 years old when photographer Clifton R. Adams landed on her doorstep in 1927, taking snaps of a country still recovering from the devastation of the War of Independence and Civil War. Within a year, Bridget had moved to the US, making a lonely solo passage across the waves to Boston. She did not return home again for 44 years.

Her story is the Irish story of emigration, sadness, a new life and her own version of the American dream. There was even a trip home much later back to her Camelot, her home place.

When her photo was first published, her son Tom Farrell contacted IrishCentral to tell us more about the young girl in the 92-year-old photograph and the two women who stand by her side. A quiet and unassuming character, Bridget, or Betty as she was known in America, never spoke too much of the photo and it was only discovered by accident later when another family member spotted it while browsing through magazines. 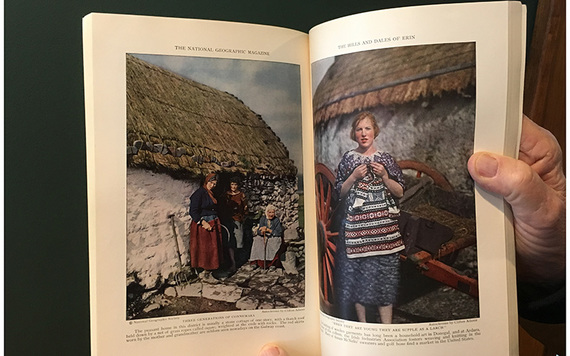 Born on December 20, 1910, Bridget had three sisters and three brothers, all of whom left Ireland but for two brothers who looked after the farm. Two of her sisters left for Boston before she made the journey, joining them and her father’s brother’s family a couple of months after her appearance in National Geographic magazine. She left behind the two women in the picture: her mother Annie Mulkerns Kane and her paternal grandmother Bridget Coyne Kane. After she boarded the ship for the long journey to America she never saw either again.

“She had just turned 16 a couple months before that [the picture] and the next year she left Ireland and she never saw her parents again. She did go back in 1972, but my grandparents had passed away. I think she missed my grandmother by a few years,” Farrell told IrishCentral.

“It was 44 years. I look at this and I find it mind-boggling because I have a grandson. He just turned 16 and I'm a basket case that he's going to be driving now. She crossed the ocean by herself. She didn't have anybody else with her.

“She had two sisters here who sent her money to help her with her passage,” he continued, “but she went to Boston originally. She had cousins in Boston. Her father's brother had emigrated to Boston and had seven children up there and a couple of cousins were her age, born around 1910, 1911, 1912.

“But none of the three sisters were that happy up in Boston and they moved down to Brooklyn.”

Bridget – by then Betty for fear an Irish name would work against her – moved to Brooklyn in the early 1930s, met Farrell’s father, the son of Irish immigrants from Longford, and married shortly thereafter. They settled in the Prospect Heights area of Brooklyn. There they stayed until 1951 when they moved out to New Jersey.

Bridget returned to Ireland just once, in 1972.

Despite her famous turn in the international magazine, Farrell’s family only came across the original copy of the magazine after Bridget's death and she is said to have spoken little of something her family still regards as extremely special. It was only when her brother-in-law recognized her when he picked up the magazine in a waiting room that the photo came to the attention of the family at all. 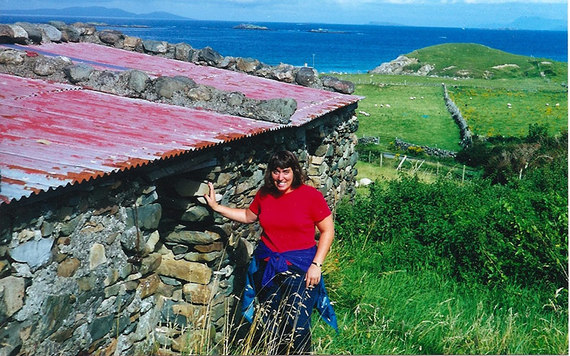 “I think she was self-conscious about the picture being that it was a peasant farm and she had no shoes on. I know she got into the magazine by accident,” Farrell explained.

“We have two copies. I have one and my sister has one. She has the original one which she found after my mother passed away. It was buried in a chest of drawers at the bottom. We knew about it and we had seen it, but she never kept it out much. I just think she was very self-conscious. I don't recall her bringing it out or pointing it out to anybody.

“She was very low-key, quiet, easy going. She could get lost in a crowd because she's not going to be one that's looking for attention or anything. I think that's probably pretty accurate to say that she was self-conscious about the picture.”

Carrying on the family tradition of portraits outside the old home, Farrell even has a picture of his own daughter standing outside the Lettergesh house, taken in 1996 on one of his several trips to Ireland to visit his mother's homeplace. He even spent a whole summer on the farm, which is now owned by a neighbor, back in 1952. His visit just fell short of coinciding with the shooting of “The Quiet Man.” The horse race scenes were filmed along Lettergesh Beach near the house. 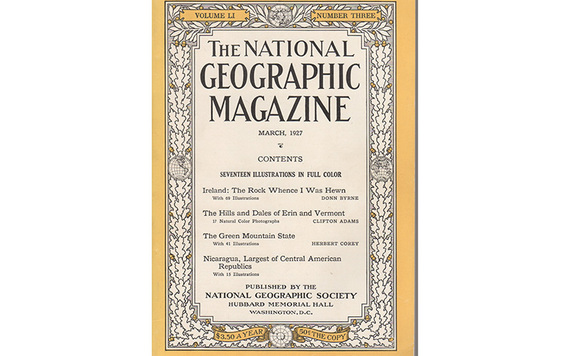 “That building, that was their outhouse and when my daughter was there it was really just a barn, but when I was there they used to keep chickens in it. I spent the whole summer there in 1952. They had built a house across the street on the other side of the road.”

Even though she featured in some of the first color photographs taken in Ireland, Farrell still believes his mother, who died of pancreatic cancer in 1975, wouldn’t be too impressed by it all.

“She'd be more impressed by all her descendants and that we're a close family,” he said.

“She was the backbone. My father was out there working every day. He was a laborer and worked hard. She never worked and he was so proud of it, but she was the one who made sure we got to school on time, the lunches were made and everything.

“My brother and sister live within half an hour of me and we see each other all the time.

“I know she would be very pleased. One of her final words to my sister was to always stay close and we have. She has 18 descendants: three children, six grandchildren, and nine great-grandchildren.”