"True to their muddy insights, females are still treated like second-class members in their church." 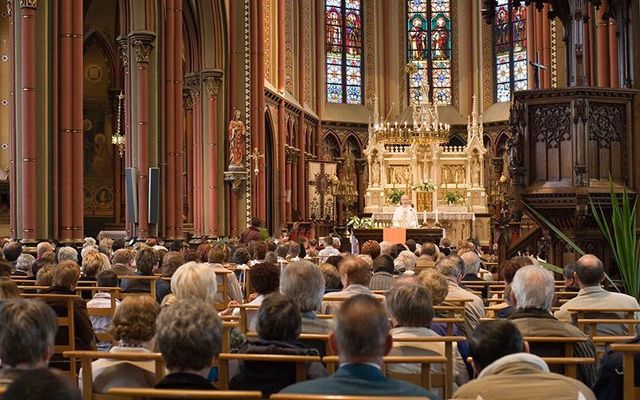 Where are the women's voices: "Christ stressed that his Spirit is with all the members of the church." Getty

The Catholic Church's history speaks volumes, Imagine if women were consulted on issues like clerical celibacy, the ordination of women, and respect for same-sex love.

Women fared poorly in the theological writing of St. Augustine and St. Thomas Aquinas, highly influential figures in the Catholic tradition. Augustine promoted the story of an original sin happening in a paradise garden with Adam blaming Eve for leading him astray. Aquinas believed that the female fetus was really an incomplete male resulting from weak semen.

Of course, they lived in past centuries and Thomas’s biological theory was debunked a long time ago, but their negative outlook on a woman’s inferior role in the church has cast a long and dark shadow. True to their muddy insights, females are still treated like second-class members in their church.

For example, at the Amazon Synod, summoned by Pope Francis in late 2019, important recommendations emerged for changes in church practices to better serve the native communities not only in Brazil but also in the neighboring countries of Peru, Venezuela, and Columbia. It is noteworthy that while women helped with the planning and organization of this mega-church event in the Vatican, not even one had a vote for or against the important concluding synod proposals.

One recommendation that was approved by a clear majority favored allowing female deacons in this region, which is very short of priests, but it was shelved by a pope who seems to be hamstrung by the insistence of the old guard that women must be kept away from the altar.

More recently, the Vatican gave its full approval for females to act as lectors and altar girls. These marginal alterations in the ecclesial protocol, already part of the practice in many parishes, do not impress most women. Crumbs from the table will no longer mitigate their disillusion because they are wise to the fact that their inferior status remains unchanged.

The Catholic Church is organized around a male hierarchy.  Priests are at the bottom of the ladder, followed by titles like monsignor or archdeacon or abbot before making the big leap to bishops who are given charge of geographical areas, and then archbishops and cardinals complete the pecking order under the pope at the summit.

Canon Law forbids the inclusion of any woman in this clerical power structure, which continues as a bastion of male privilege. People with power always come up with convenient excuses to maintain the status quo.

For instance, they said that women were too emotional for making the tough choices involved in running any organization. Another rationalization heard often suggests that females are at their best at child-rearing and homemaking, away from the boardroom or the presbytery.

The last century was a time of major changes in the expectations of women in society. From winning the right to vote in 1920 in the United States to the election 100 years later of Kamala Harris as vice president shows a dramatic movement in American culture.

Attitudes to women in the Catholic Church also revealed some real progress but fell far short of what is needed.

The clerical sex abuse crisis has done untold harm to the Catholic community throughout the world.  Celibate priests, brothers, and others reaching the very top echelons in the Vatican sexually molested young boys and girls, causing the biggest church crisis since the French Revolution.

This terrible breach of confidence was made even more egregious by the way it was dealt with by the hierarchy. When complaints were made, the ecclesial authorities in most cases transferred the culprits to another parish or pastoral setting, where predictably the perverted behavior often continued.

Schools run by religious sisters had relatively few abuse cases, and the nuns themselves were rarely accused of sexual malfeasance. Imagine the results if they or, better still, some parents were consulted in the halls of the Vatican or in the conference rooms in bishops’ palaces when they considered how to respond to abuse allegations.

Would they too have approved the prevailing “move them somewhere else” approach?  Unlikely! They would surely have insisted that the care and welfare of children had to be valued more than avoiding the embarrassment for the church of a public scandal.

Dissent from authority during the belligerent Vietnam era in the 1960s spread to all centers of power, including the churches where, up to then, obedience to rules and commandments often passed for genuine religion. Pope John XXIII, the greatest of our modern popes, told people to open the windows and let in the fresh air of truth and struggling humanity when he called the Second Vatican Council in 1962.

The use of contraceptives was a major issue in those days. Pope John set up a commission to advise him on the morality of the use of the contraceptive pill by married couples. This deliberative group was expanded under John’s successor, Paul VI, to 72 people, including lay and clerical members.

In their report, a clear majority wrote that there was nothing immoral for a couple to control the number of children in their family by using the contraceptive pill. This would greatly lessen the pressure on women forced to suffer through pregnancies they didn’t want and frequently could not afford.

However, Paul decided to follow the recommendations of the minority on the commission, and in his encyclical Humanae Vitae, published in July 1968, he argued for a continuation of church rules banning the use of contraceptives by married couples. He was greatly influenced by Pius XI who in a 1930 encyclical ruled out the use of birth control pills or contraceptive devices.

Pius was reacting to a decision by Protestant leaders at their Lambeth Conference in the same year to ease restrictions on contraceptive use by married couples. He painted them as going soft on the biblical standards of sexual behavior while claiming the high ground for Roman moral standards.

Pope Paul’s mandate still stands, and indeed he has been canonized partly for what was adjudged as the brave but unpopular teaching which insisted on a narrow view of sexuality, but the great majority of Catholic couples pay no heed to church teaching in this area. In Shakespeare’s words in Hamlet, “It is honored (far) more in the breach than in the observance.”

The church stresses, with no clear logic, that it can never function as a democracy which, at a minimum, would compel the hierarchy to seriously consider the beliefs of the people before making major pronouncements.

Christ stressed that his Spirit is with all the members of the church, prompting and encouraging the positive signs of the times.  Ways can be found with modern technology to gauge the moral convictions of the people.

Imagine if they were consulted about the great church issues of our day like clerical celibacy, the ordination of women, and respect for same-sex love. There might be major positive changes, possibly leading to another renaissance, with women playing a full and equal part in a renewed church.